Wisdom, the world’s oldest known wild bird, recently returned to Midway Atoll!The beloved Laysan albatross, or mōlī, is at least 71 years old now. Biologists first identified and banded Wisdom in 1956 after she laid an egg, and the large seabirds aren’t known to breed before age 5.It is estimated that Wisdom has produced 50-60 eggs and as many as 30 chicks that fledged, according to Jonathan Plissner, supervisory wildlife biologist at Midway Atoll National Wildlife Refuge.The ageless Wisdom, with her well-known band number of Z333, was first spotted this nesting season on Thanksgiving Day.Her long-time mate, Akeakamai, has yet to be seen and was absent last nesting season, too. Male albatrosses typically return to the breeding site before their mates, wrote Plissner in an email. 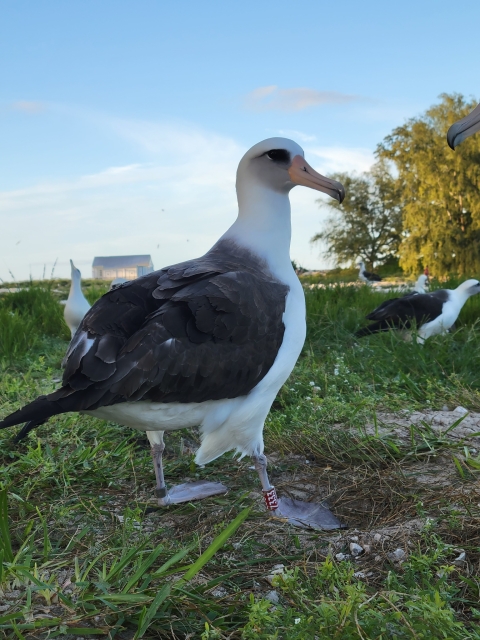 For decades, Wisdom and Akeakamai, like most pairs of mōlī, returned every year to the same nest site to lay one egg.

They are among the millions of albatross that return to Midway Atoll on the far northern end of the Hawaiian archipelago to nest and raise their young.Wisdom has not been seen in the past week and most mōlī have already laid their egg, but biologists will continue to monitor the area in case the world’s oldest known bird returns.

Why is Wisdom so important? https://youtu.be/lKyEHCunI08

Learn more about Wisdom, Midway Atoll and the Battle of Midway National Memorial, all within the Papahānaumokuākea Marine National Monument: http://ow.ly/3qFk50Jh3l3