Tourism is at the heart of Alaska’s economy and a lifeline of its people. Annually, 2.2 million visitors vacation in Alaska, and for many, nothing better reflects their adventure than a piece of art or a handicraft made by an Alaska Native. Its authenticity is of utmost importance, and a primary consideration when tourists shop for a piece to take home. The artist’s name, backstory, home village, and cultural significance of the artwork enhance the meaning of the piece and of course drives the value of these items as well.

According to studies conducted for the State of Alaska’s Division of Economic Development, tourism in Alaska has an estimated $4.5 billion impact on the Alaskan economy with 2.2 billion of those dollars being spent directly by consumers. The market for authentic Alaska Native arts and crafts is vast, expanding at a rapid pace, and supports artists throughout Alaska – from the big port cities of Anchorage and Juneau to rural villages in very remote parts such as Kake and Kaktovik.  Alaska Natives make their living selling their items directly to consumers or to shops that in turn enter them into the world of retail and commerce.

Fraudulent Alaska Native arts and crafts are about as old as Alaska’s tourism itself. The volume and scale of this illegitimate industry is problematic and harmful in many ways. Not only does it deprive legitimate Alaska Native artists of potential sales and income, but just as importantly the history, meaning, and cultural traditions associated with authentic pieces is obscured by and confused with these counterfeit items.

Meridith Stanton is the IACB’s director and an enrolled member of the Delaware Nation and a Choctaw Nation descendant. She states, “The mission of the IACB is to promote and protect authentic Alaska Native and American Indian artists and artisans, which is even more challenging during the COVID pandemic and the economic downturn. Therefore, it is even more important now for consumers to purchase authentic Alaska Native artwork to help support hard working, dedicated, and talented Alaska Native artists who must rely on the production and sale of their creative work to not only support their families, villages, and communities, but to pass on these important skills and traditions from one generation to the next. Buy American – Buy Authentic Alaska Native Art!”

Naturally, the work of the IACB is vital to Alaska’s indigenous people. James Johnson, a Tlingit artist from Juneau, explains, “Alaska Native artists have dedicated their lives to our culture and carrying forward the art of our ancestors. The art form is sacred – the art form is alive and full of knowledge. Intentionally selling counterfeit art is stealing from artists, their families, and our communities. The Indian Arts and Crafts Board is protecting the interests and livelihoods of all Alaskan Artists, Gunalchéesh (Tlingit for ‘thank you’).”

One of the ways the IACB supports Native American and Alaska Native artists, is by processing complaints, concerns, tips, and more from the public on possible IACA violations. The board forwards those that rise to an investigation level to the specialized Indian Arts and Crafts Act Investigation Unit (IACA IU) of the U.S. Fish and Wildlife Service’s Office of Law Enforcement (OLE).

Director Stanton continues, “The IACB, by statute, is responsible for enforcing the IACA and works hand in glove with the Service’s top-flight IACA IU agents to develop and expand IACA cases while serving as subject matter experts and liaisons with Indian Country and the Indian art industry.”

The IACA is a truth-in-advertising law that prohibits misrepresentation in marketing of American Indian or Alaska Native art and craft products within the United States. In 1990, it was amended to provide stronger penalties for marketing products as "Indian-made" when not made by Indians, as defined by the act. Originally, enforcement was delegated to the FBI, but in 2012, the enforcement side was directed to the Service’s OLE because many Indian arts and crafts incorporate wildlife parts and because of its successful work investigating illegal commerce.

Since the OLE began enforcing the IACA, investigations have been extensive and crimes have been documented in states such as Alabama, Alaska, Arizona, California, New Jersey, New Mexico, and Texas; and in countries such as China, Indonesia, Mexico, Pakistan, the Philippines, and Thailand. “Flooding the market with counterfeit Native American art and craftwork cheats the consumer, undermines the economic livelihood of Native American artists, and impairs Indian culture,” says OLE’s Assistant Director Edward J. Grace. “I am incredibly proud of the investigative excellence performed by our agents and of our close working relationship with the IACB and the U.S. Department of Justice. Our work has dismantled and stopped international criminal syndicates that created and sold fake Indian arts and crafts to unknowing consumers.”

These investigations are complex and vary quite a bit in nature and scale. Some past cases have involved individuals claiming to be Alaska Natives and selling their products as such, while others have involved multinational companies with dozens of employees and retail locations across the country and the world, all engaged in similar fraudulent conspiracies to market counterfeit Alaska Native and Indian art and craftwork.

The IACA IU agents have revealed that these criminal networks use specialized hubs across the nation to distribute and market fraudulent Indian artwork. Operating through complex webs of middlemen, criminals use the sales of counterfeit Indian art to undercut reputable competitors.  Investigations have shown that the illegal profit may be more than 200% over the cost it takes to create the counterfeit items.

For example, the former owner of an Anchorage-based shop, carved figurines such as seals, bears, and Billikens (small figurines) out of walrus ivory. The owner of the shop and carver is not an Alaska Native but used an alias that sounded and looked like a common Alaska Native name. During undercover contacts with Service special agents, the owner represented these items as having been made by an Alaska Native, his alias. These items were displayed in the same place and manner as authentic Alaska Native arts and crafts in his shop and in close proximity to “Silver Hand” signage that signifies authentic Alaska Native work. At the conclusion of this investigation, over 450 fraudulent and misrepresented items were seized from the store, which had an estimated retail value of approximately $125,000.

Not all violations of the IACA concern products made using wildlife parts. In 2021, a non-Alaska Native and Juneau gallery owner, pleaded guilty to one felony count of misrepresentation of Indian produced goods and products. He misrepresented himself as a Tlingit stone carver and sold fraudulent Alaska Native-made stone carvings in his gallery. In actuality, the carvings had been made and imported from the Philippines. The defendant agreed to forfeit 1,296 stone carvings, which if sold would have brought the defendant more than $1.5 million.

The IACB, and the Service, proactively work with partners to educate the public, advocate for authentic Native American and Alaska Native artists, and put potential violators on notice.

An educated consumer is one of the most effective ways to stop fraud.  To assist the shopper, the IACB offers several online brochures such as the Alaska Native Ivory, Alaska Native Art, and Sustainable Tradition: The Beauty of the Northern Sea Otter in Alaska Native Art. These resources are just a few examples that provide the consumer with tips on purchasing and transporting authentic Alaska Native artwork; explain educational facts on ivory types and sources; and provides buying tips and information about various Alaska Native art forms.

Alaska Native arts and crafts made using wildlife parts and pieces can include multiple regulated and protected species. In Alaska, violations of the IACA and wildlife protection laws and regulations, such as the Marine Mammal Protection Act, Endangered Species Act, Bald and Golden Eagle Protection Act, and Lacey Act, go hand-in-hand.

The Service and the IACB are working hard in the fight against fraudulent Alaska Native arts and crafts, and we have achieved several successes; however, we always appreciate public support.

If you suspect, or have evidence, of a wildlife crime or IACA violation, please contact us.

Written by members of OLE and IACB. 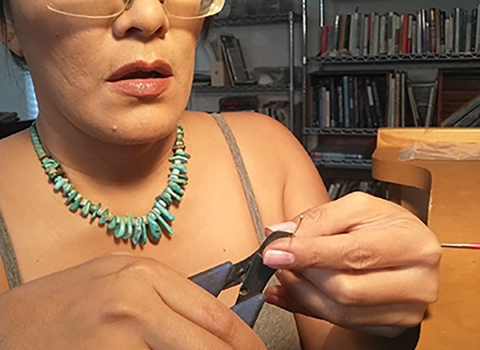