Did you know more than one third of North American bird species rely on wetlands for food, shelter, breeding, nesting, and rearing their young? Wetlands are of particular importance to migratory birds, which rely on saltwater, brackish, and freshwater wetland habitats for breeding as well as resting and refueling along their migration routes. With increased stress due to habitat loss, pollution, climate change climate change
Climate change includes both global warming driven by human-induced emissions of greenhouse gases and the resulting large-scale shifts in weather patterns. Though there have been previous periods of climatic change, since the mid-20th century humans have had an unprecedented impact on Earth's…

Learn more about climate change , and invasive species invasive species
An invasive species is any plant or animal that has spread or been introduced into a new area where they are, or could, cause harm to the environment, economy, or human, animal, or plant health. Their unwelcome presence can destroy ecosystems and cost millions of dollars.

The U.S. Fish and Wildlife Service (Service) is the lead federal agency that manages and conserves migratory birds in the United States, which it does through its Migratory Bird Program. It is also the federal agency tasked with providing information to the public on the status and trends of our Nation's wetlands. The Service's National Wetlands Inventory (NWI) is a publicly available resource that provides detailed information on the abundance, characteristics, and distribution of wetlands. The NWI dataset contains over 34 million mapped and classified wetland features, providing wetland acreages, and habitat information for these vital national resources.

Data is the foundation of science based decision making, highlighting the importance of accessible, quality, and contemporary resources. In recent years, NWI staff have assisted several agencies to leverage NWI data to inform conservation strategy planning. By using reliable data sources, these strategies can better target conservation objectives. From the Atlantic Flyway to the Prairie Potholes Prairie Potholes
These freshwater marshes are found in the upper Midwestern prairies, especially the Dakotas and Minnesota. Depressions that were created by retreating glaciers about 10,000 years ago;, they fill with water during spring, providing important habitat for waterfowl and many other species. Indeed, the…

The state of Wisconsin recently published its Wisconsin Waterfowl Habitat Conservation Strategy (2020). Collaborators included the Service, WIDNR, Ducks Unlimited, USDA, and University of Wisconsin-Stevens Point. With the last comprehensive analysis done 30 years prior, this new information will be used to target future habitat restoration objectives. NWI data provided a key geospatial layer for informing this strategy to identify where the greatest density and distribution of breeding habitat currently exists. Complex analytical models were developed, utilizing multiple data inputs, to estimate the levels of natural resources and ecosystem services that existing wetland habitats provided. This information allowed for the prioritization of watersheds to direct protection, mitigation, and restoration efforts to make the largest impact.

Similar efforts were recently conducted by the Service's Upper Mississippi Great Lakes Joint Venture for both Waterfowl and Waterbird habitat strategy development. The Service partnered with Ducks Unlimited to model Black Duck habitat in the Eastern United States using NWI data. The Habitat and Population Evaluation Team (HAPET), part of the Service's National Wildlife Refuge System, integrates scientific data and landscape-scale conservation planning with a focus on migratory birds. The HAPET utilizes NWI in their Predicted Duck Pair Accessibility Maps to identify focus areas with the most capacity for waterfowl production for habitat protection and restoration.

This past year, NWI updated wetlands data for almost 60 million acres across ten states. With more than 425 million acres of active mapping updates currently in the works, NWI seeks to find more funding opportunities and partnerships to achieve the goal of a nation wide contemporary dataset, aimed at providing the best information to our partners in conservation. 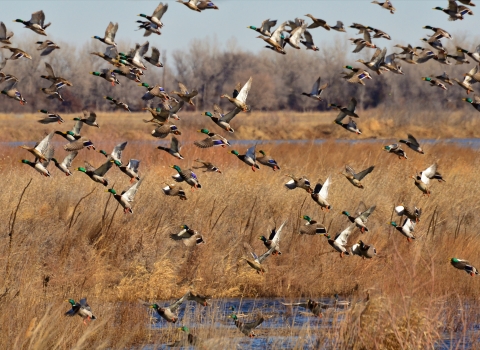