Dredging up the past at Antioch Dunes

Over thousands of years, the shifting sands of time built dunes that reached 120 feet high and stretched for 2 miles along the San Joaquin River, about 35 miles east of San Francisco. Isolated from similar habitats, the Antioch Dunes slowly developed species found nowhere else in the world. 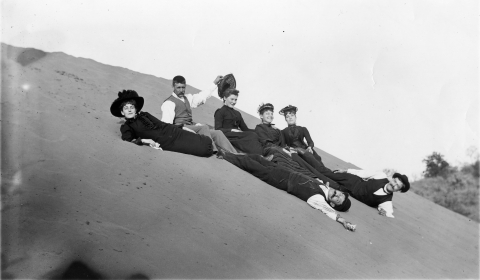 The gradual shifting of sand, however, was replaced by a rapid effort to turn it into bricks in 1906, after a devastating earthquake and fires demolished buildings in San Francisco. As industry depleted the sand over the next 70 years, the dunes’ unique species struggled to survive on dunes that eventually topped out at 50 feet.

Now the U.S. Fish and Wildlife Service and Port of Stockton are trying to turn back the clock, one load of sand at a time. Since 2013, the Port has pumped nearly 92,000 cubic yards of sand — enough to fill more than 6,500 dump trucks — onto the dunes to support three endangered species: the Lange’s metalmark butterfly, Antioch Dunes evening primrose and Contra Costa wallflower.

“The population of Lange’s has been trending downward for a couple of decades now,” said Mark Hayes, a biologist with the Service’s San Francisco Bay-Delta Office. “We counted about 10 butterflies in 2020, and the total population is very likely less than 50 currently. This is precariously low.”

The orange, black and white butterfly with a wingspan of 1 to 1.5 inches, whose population likely numbered 25,000 less than a century ago, was listed as endangered in 1976. The white-petaled primrose and yellow-petaled wallflower followed with listings in 1978.

The Service established Antioch Dunes National Wildlife Refuge for the three species in 1980, making it the first national refuge for insects and plants. At the time, the 55-acre urban refuge with two non-adjacent units was also the nation’s smallest.

“This is a very industrial neighborhood we’re tucked into,” Louis Terrazas, a wildlife resource specialist for the refuge, said of Antioch Dunes. “There’s a shipyard on one side, a gypsum-processing plant, an old water-treatment facility over there and two strips of land owned by Pacific Gas and Electric.”

As sand disappeared in the 20th century, non-native grasses and plants took hold, crowding out the primrose, the wallflower and the Antioch Dunes buckwheat, which is the only plant where the Lange’s butterfly will lay its eggs. In the early 2000s, a series of wildfires further cut the butterfly population, leaving only about 100 alive in 2010 — all on the refuge’s 14-acre eastern unit.

With no butterflies to protect on the western unit, the Service decided to overhaul that site and try to restore the conditions that had once enabled the dunes’ endangered species to thrive. Refuge staff began looking for sources of sand in 2012 and were soon contacted by the Port of Stockton. 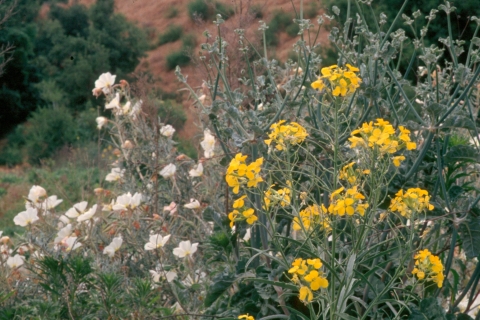 The Army Corps of Engineers dredges sand from the San Joaquin River each year to clear passage for cargo ships, and the Port is responsible for finding sites to place the sand. The Port typically sent sand to nearby Sherman Island, but saw an opportunity to make a real impact at Antioch Dunes.

“Our board has been pushing us to reach out and find projects like this — ways we can go above and beyond the normal regulations to try to have a beneficial impact on the [Sacramento-San Joaquin River] Delta,” said Jeff Wingfield, the Port of Stockton’s director of environmental and public affairs. “It costs us a little extra in time and prepping the site and some other little work, but for us it’s important to beneficially reuse the material.”

Since the Port’s first delivery in 2013, the evening primrose has experienced a huge jump in numbers, Terrazas said, and the wallflower and buckwheat are also reappearing. Eventually the refuge hopes to re-establish the Lange’s butterfly on the western unit as well. 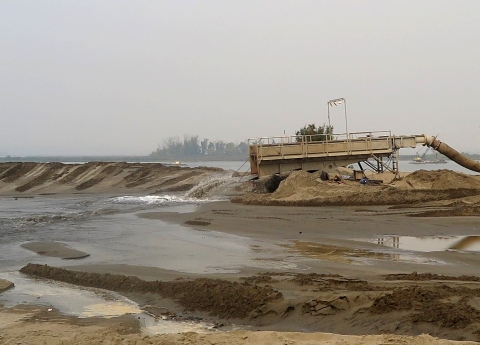 To fully restore the refuge’s dune system, the Service could continue taking sand deposits for a couple of decades, Terrazas said, which might not be possible without the Port partnership.

“We bought some sand from another site in 2009, but it was really expensive, and the sand material had some non-native species in it,” he said. “We decided it was not the best method of restoring the site.”

Under the current method, the Port provides and delivers clean sand, and it doesn’t cost the Service a dollar.

“Restoring the dunes is vitally important to the refuge’s ecosystem and could be the key to long-term preservation of its endangered species,” Hayes said. “We value our partnership with the Port and hope this continues as we implement our restoration plan.”