The Miami tiger beetle was placed on the Federal list of threatened and endangered species as endangered in 2016. In September, 2021, the Service proposed designating critical habitat for the beetle. The proposal is to designate approximately 1,977 acres as critical habitat for the species in Miami-Dade County, Florida. A draft economic analysis (DEA) is also available for the proposed designation.

After a public hearing and a comment period that ended in December, 2021, a final decision is pending.

The species is found outside the boundaries of Everglades National Park on the pine rocklands of the Miami Rock Ridge in Miami-Dade County, Florida. The Miami tiger beetle is known to occur in two populations separated by urban development that are within 3.1 miles (5 kilometers) of each other. Based upon available information from survey data, it appears that the species occurs in a very limited range. Surveys and observations conducted at Long Pine Key in Everglades National Park have found no Miami tiger beetles, and habitat conditions there are considered unsuitable for the species.

More information on the proposal, including the draft economic analysis, is available by going to the Federal eRulemaking Portal, https://www.regulations.gov/docket/FWS-R4-ES-2021-0053/document.

The adult Miami tiger beetle is a small (6.5-9.0 millimeters), elongate beetle with an oval shape and bulging eyes. The underside of the abdomen is orange to orang-brown in color. It is uniquely identified by the shiny dark green dorsal surface, sometimes with a bronze cast and, without close...

Listing and Classification
We use the best scientific information available to determine whether to add a species to (list) or remove from (delist) the federal lists of endangered and threatened wildlife and plants. We also determine whether already listed species should be reclassified from threatened to endangered (uplist...
Program
Baileys Crossroads, VA 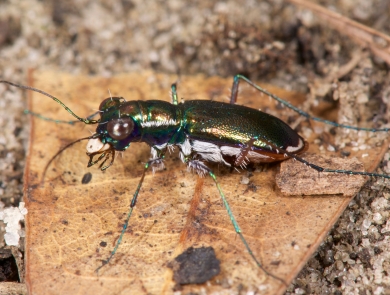 Endangered Species Act
Extended Public Comment Period and Public Hearing for the Miami Tiger Beetle Proposed Critical Habitat
What action is the U.S. Fish and Wildlife Service taking? The U.S. Fish and Wildlife Service (Service) is extending the comment period on a proposal to designate critical habitat for the Miami tiger beetle by 45 days and scheduling a public hearing on the Sept. 7 proposed rule (86 FR 49945). The...
Nov 5, 2021

Endangered Species Act
Service Extends Comment Period and Schedules Hearing on Proposed Critical Habitat for Miami Tiger Beetle
The public has more time to have a say on the proposed critical habitat for the endangered Miami tiger beetle. The U.S. Fish and Wildlife Service is extending the comment period 45 days until December 23, 2021, and holding a virtual public hearing December 2, 2021, from 6-7:30 p.m. Eastern Time to...
Nov 5, 2021