In Virginia and South Carolina hatcheries, biologists keep a close eye on shad and striped bass while taking time to focus on something that will never wear scales: mussels.

And down in Florida, hatchery scientists charged with making sure rivers and streams are stocked with catfish and bass are singing the praises of a tiny bird they’re raising outside their labs. 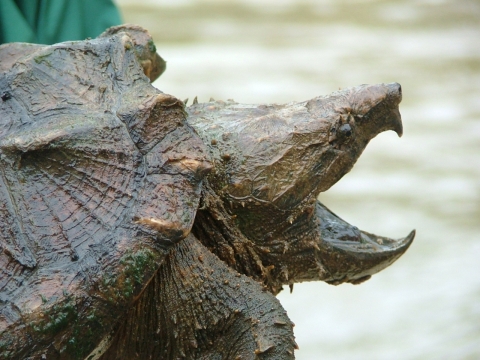 Over in Oklahoma and Louisiana? Fishery biologists have become experts in the art of raising &mdash; and the correct way of handling &mdash; alligator snapping turtles.

Mussels, birds, turtles: these creatures, and more, are living at national fish hatcheries across the nation. The U.S. Fish and Wildlife Service (Service) which operates the hatcheries, welcomes their presence. After all, preserving species is what the Service does.

Last year, 13 hatcheries nationwide were involved in propagating creatures other than fish. Those hatcheries are hosts to 30 non-fish species &mdash; shelled, feathered, hopping &mdash; as well as growing more than 100 species of fish.

Statistics show that the past decade witnessed a spate of non-fish species growing in hatcheries. Among them: the Wyoming toad, the Barton Springs salamander and the gopher tortoise.

The expansion of hatcheries’ duties “speaks to the need out there” to look after imperiled creatures, said Nate Wilke, the Service’s branch chief of hatchery operations and applied science.

What is happening at fisheries is eye-opening, added David Miko, the Service’s division chief of fisheries and aquatic conservation.

Miko, who joined the Service about four years ago after two decades of fisheries work in Pennsylvania, has watched fisheries take on ever more duties.

Was he surprised to learn that fisheries were so closely involved with raising creatures that lacked fins? “I’d change the word ‘surprised’ to ‘impressed’,” he said.

The host hatcheries vary, but have at least one thing in common: They had the space to accommodate something new.

And this: The people running them recognized they needed to act. 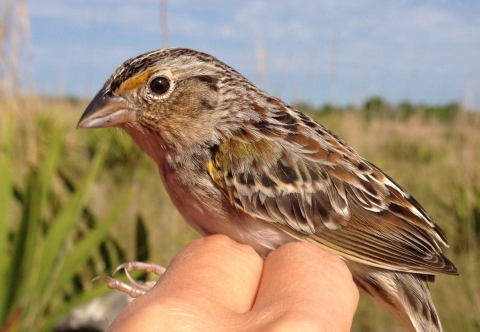 They don’t have gills. They aren’t covered in scales. And they don’t swim. No matter: They’re residents of the Welaka National Fish Hatchery.

Earlier this year, 18 federally endangered Florida grasshopper sparrows arrived at the hatchery, midway between Jacksonville and Orlando. Tony Brady, the hatchery’s deputy project leader, enjoys having them on site.

“We go out in the evenings and watch them,” said Brady, who’s been with the Service 16 years. “They chase crickets.”

They’re young birds, in their second year, and will stay at the hatchery for about a year before they’re released into the wild. Some may be sent to a facility to be used as breeders.

Learn more about structure originally designed to be a build-it-yourself carport, are doing just fine.

And let’s not forget the hatchery’s other non-finned residents &mdash; Eastern indigo snakes. The snakes, which are listed as threatened, live in specially built trays until spring, when they’re sufficiently mature for release into the wild. 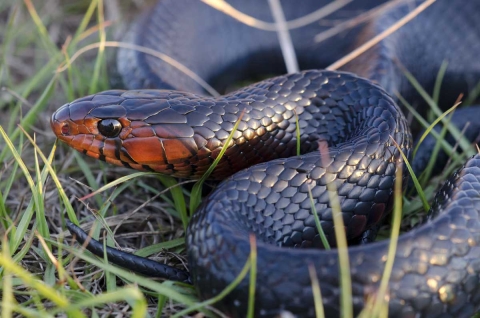 Indigos, Brady noted, are non-venomous and are North America’s longest native snake. Some can exceed 8 feet.

The hatchery once was a deer and quail farm before converting to raising fish. Now, with grasshopper sparrows flitting about in an aviary and snakes wiggling about in trays, said Brady, “we’ve come full circle.” 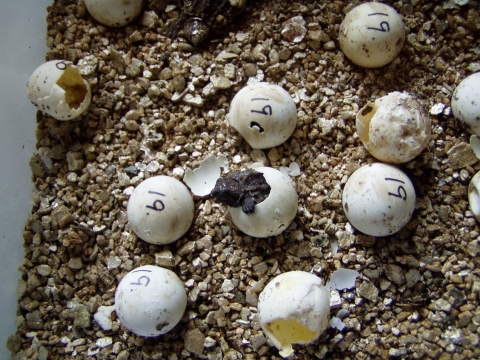 Ask the biologists at Tishomingo hatchery in Oklahoma about raising catfish and bass and they can rattle off stats faster than you can cast a Jitterbug fishing lure into a lake. They also can tell you about another swimming species &mdash; one that can take off your finger with a single snap.

In the late 1990s, biologists learned that the species was in “steep decline,” said Kerry Graves, who manages the hatchery, located 100 miles south of Oklahoma City. In Oklahoma, the population had dwindled to one viable population, Graves said.

Somebody had to do something. Tishomingo opened its doors, and a pond, to nearly a dozen turtles from the Oklahoma population.

“Our interest in the beginning was to figure out how to raise these things in captivity,” he said. That meant phone calls and visits to zoos.

The research paid off. In 2002, the hatchery hosted its first nest in the pond. Five years later, with a growing population in captivity, the hatchery released its first turtle at the Sequoyah National Wildlife Refuge. “Through the years,” Graves said, “it’s just evolved.”

An evolution fueled by experts and energetic grad students who aren’t afraid to get wet &mdash; or worse. Alligator snapping turtles are as pleasant as they are pretty &mdash; in other words, not at all. “One time, a young one bit me, yeah,” Graves said. Another time, a grown snapper took the tip of a colleague’s index finger.

Others have read it. Tishomingo fields requests for turtles from Louisiana, Illinois, Texas and other states where the big reptile’s future remains shaky.

For Graves, the turtle is a hard-shelled reminder of how far he’s come in Service work. He started as a grad student in Texas, bounced around a bit, and finally came to Tishomingo &mdash; never dreaming he’d become a turtle guy.

In Virginia, the Harrison Lake National Fish Hatchery for years has specialized in stocking rivers that run to the Atlantic Ocean. Then it got into mussels.

The hatchery is part of a collection of Service hatcheries that have embraced mussel propagation, and for good reason: Mussels help keep rivers and streams clean. They’re also an indicator of water quality. Hatcheries in West Virginia, Wisconsin, Tennessee, Kentucky and South Carolina, among others, make mussel propagation a priority. The Service is working with North Carolina partners to propagate mussels, too.

The same is true at Harrison Lake. In 1994, biologist Michael Odom wrote a proposal to expand the fishery’s duties to include growing mussels. A decade would pass. Odom would be promoted to hatchery manager.

But the words Odom wrote apparently weren’t forgotten. In 2004, officials gave him a green light to propagate mussels. By 2007, with the help of the Virginia Department of Game and Inland Fisheries, Harrison Lake had its first mussel “grow-out,” taking juvenile mussels and raising them until they would be large enough to be planted in streams.

That first effort produced mixed results and spawned the Virginia Fisheries and Aquatic Wildlife Center at Harrison Lake, a cooperative venture between the Service and Virginia’s game and inland fisheries department.

Odom realized that he and his colleagues had a learning curve not unlike a mussel’s shell &mdash; something that rose sharply to a crest. In 2008, they tried to propagate the mussels the way nature intended, with gravid, or pregnant, females releasing their young to temporarily mature on a host fish’s gills before dropping on a stream bed. At the hatchery, that bed was located inside a tank.

Since then, the cooperative work at Harrison Lake has increased mussel production nearly every year. In 2018, it propagated 898,000 mussels. Some will be ready to be placed in streams early next year; others will need to mature longer.

The mussels range from green floaters to the James spinymussel, which is listed as endangered. Odom hopes the work at Harrison Lake will help recover some listed mussels and keep other at-risk species from taking a place on the Service’s threatened and endangered list. 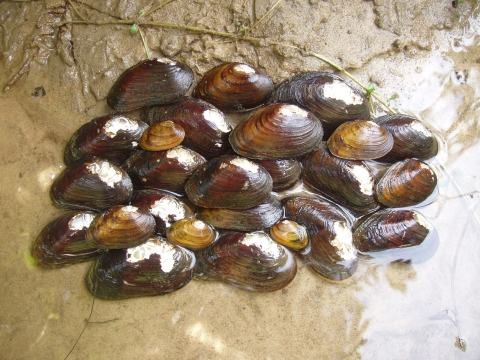 As manager, Odom isn’t involved in the day-to-day mussel operations; he leaves that to others. Since he was schooled in the affairs of finned swimmers, Odom recognizes that he’s not the expert on mussels. “I’m still a fish guy,” he says.

But the shelled creatures, he admitted, have muscled their way in to his affections.

Ana Bode wasn’t long out of the University of Wyoming when a professor pointed her to a job at the Saratoga National Fish Hatchery. She’d be working with a grumpy looking creature called the Wyoming toad. Bode said OK.

That was four years ago. Since then, Bode, a biological technician at the hatchery, has become knowledgeable in the life cycles of an endangered little hopper that is prey to a fungus affecting amphibians worldwide, as well as to predation.

The hatchery has been propagating them since 1997, from tadpole to toad. It is a process involving injecting the toads with hormones to enhance their reproduction. Specialists also outfit some of the creatures with tiny transmitters to chart their movements &mdash; toad tracking, if you will.

Bode has learned a truism about toads, too. Their grimace belies their true nature. The toads only look crabby.

And, yes, she has her favorites &mdash; usually, those that look her in the eye. Forthright toads.

“It just depends on the toad,” she said. “It’s as if they’re acknowledging you, whether they really are or not.”

Wilke, the Service’s branch chief of hatchery operations and applied science, acknowledges something else: Some hatcheries will continue their mission to propagate creatures that may not swim. More hatcheries may join them, too.

“The breadth of knowledge in raising species in the U.S. Fish and Wildlife Service is massive,” he said. “We have the facilities, the people and the experience to make this work.”