The National Wildlife Refuge System (NWRS) is a series of lands and waters owned and managed by the U.S. Fish and Wildlife Service. Wildlife conservation is at the heart of the refuge system. It drives everything we do from the purpose a refuge or district is established, to the recreational activities offered there, to the resource management tools we use. Selecting the right tools helps us ensure the survival of local plants and animals and helps fulfill the purpose of the refuge or district.

Litchfield Wetland Management District is part of the NWRS. The district manages 156 separate parcels of federally owned land, called waterfowl production areas, within a seven county area in south-central Minnesota. These counties include Kandiyohi, McLeod, Meeker, Renville, Stearns, Todd, and Wright counties. Together, the waterfowl production areas encompass about 38,000 acres of land dedicated to wildlife and wildlife-dependent recreation. The district also manages Northern Tallgrass Prairie National Wildlife Refuge tracts that fall within its range. The district currently manages four public refuge units that are adjacent to waterfowl production areas. District lands contain diverse native habitats from native forest in the northeast to the tallgrass prairie in the south and west, with the transition zone in between.

In addition to managing land for public use, the district protects more than 13,000 acres of privately-owned wetland and grassland habitat, purchased as permanent easements to restore and protect habitat. The land remains in private ownership, but the easements protect the integrity of the wetlands and surrounding uplands for wildlife. The district also works with private landowners to protect privately-owned wetlands and prairies through the voluntary Partners for Fish and Wildlife Program.

Refuges and districts use a wide range of land management tools based on the best science available. Some use prescribed fires to mimic natural fires that would have cleared old vegetation from the land helping native plants regenerate and local wildlife to thrive. Others contain wilderness areas where land is largely managed in passively. The management tools used are aimed at ensuring a balanced conservation approach where both wildlife and people will benefit.

To help plants and wildlife, Litchfield Wetland Management District staff use a variety of habitat management techniques to maintain, recover, or enhance plant and wildlife values. District staff carefully considers any management techniques and employ them in varying degrees according to the situation. At this field station our conservation toolbox includes wetland restoration, water level management, grassland restoration, prescribed fire, invasive species invasive species
An invasive species is any plant or animal that has spread or been introduced into a new area where they are, or could, cause harm to the environment, economy, or human, animal, or plant health. Their unwelcome presence can destroy ecosystems and cost millions of dollars. 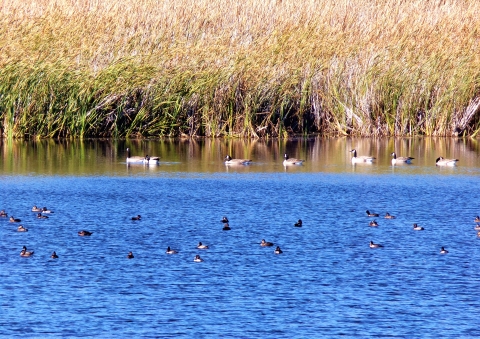 Many of the waterfowl production areas purchased by the U.S. Fish and Wildlife Service have drained or degraded wetlands on them. District staff often work with partners like Ducks Unlimited or Pheasants Forever to restore or enhance wetlands on the property to promote better waterfowl breeding habitat. 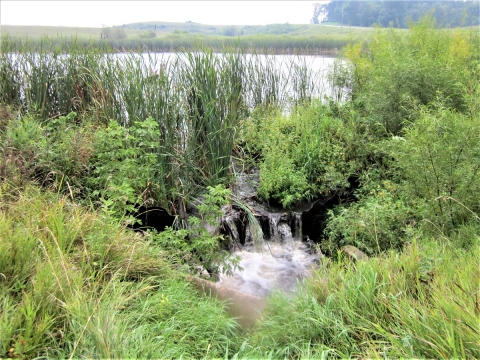 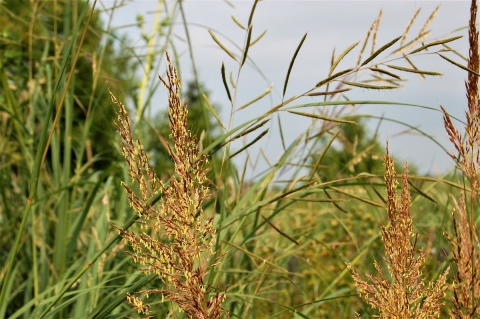 Learn more about waterfowl production area , we replant it with native prairie plants. When we do a restoration, we try to imitate the species that were present pre-settlement, to the best of our ability. We work with partners, like The Nature Conservancy, to collect native grass and wildflower seeds from another native or pre-restored unit, and then plant those seeds on the new restoration. 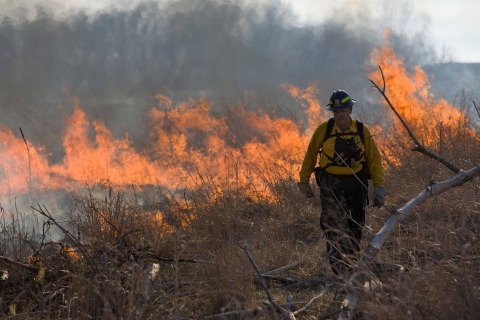 Fire is a natural part of the ecosystem and an integral part of what naturally formed and managed the prairie. Fire burns the built-up vegetation litter (called duff) and exposes the soil to air. Fire also recycles nutrients into the soil. Many native plants evolved with fire, and their seeds won’t germinate without the heat of fire or another disturbance. In present day, due to safety and potential damage to crops or residential infrastructure, natural fires are suppressed. Our fire staff plans and carries out safe, prescribed fires on our waterfowl production areas to simulate the natural processes. We generally burn waterfowl production areas on a 5–8-year rotation and see significant improvements in grassland cover, as well as a reduction in non-native plants. 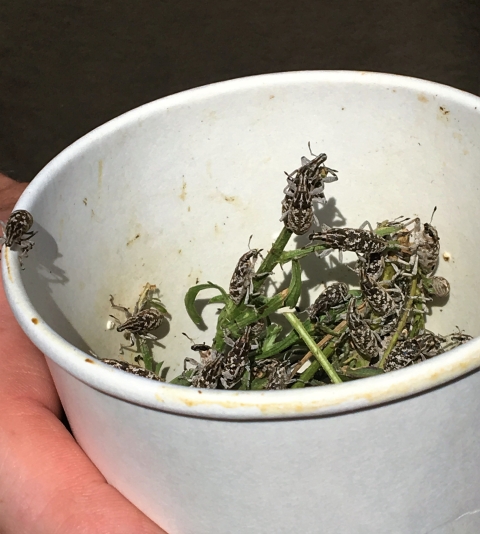 Keeping invasive plants out of our prairies is a never-ending battle. If left unchecked, they can take over an area and exclude native plant species. Tremendous effort goes into controlling invasive plants. We try to use the least intrusive control methods possible, including hand pulling, seed head clipping, mowing, grazing, haying, or if necessary, chemical treatment with either spot spraying or broadcasting in larger areas. Chemical treatment must be done carefully because it can harm native plants, too. We also use biological controls on larger infestations. We release insect species that are evolved to target and control specific invasive plant species.

By definition, prairie generally has less than 5%-10% trees. Historically, this area was devoid of most trees except the occasional oak savanna or cottonwoods and shorter brush along rivers, streams, and draws. Prairie species evolved in this environment, and many species of grassland birds avoid nesting near trees since they serve as hunting perches for predatory birds. Our focus is to preserve prairie integrity, so we work hard to remove trees that are encroaching on our prairies. 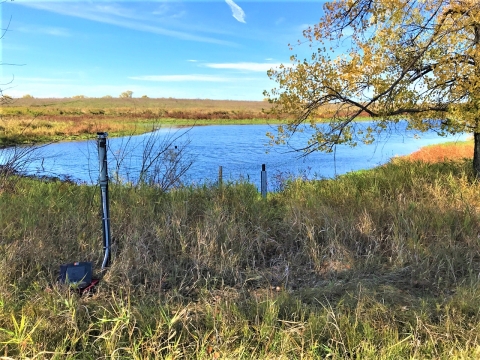 The U.S. Fish and Wildlife Service bases our management decisions on sound science. Therefore, we must conduct biological surveys and monitoring of our management actions to see if the results match the goals. We then adapt if needed. We conduct annual waterfowl, woodcock/breeding bird surveys, water monitoring, vegetation monitoring, and administer several on-going studies looking at the impacts of our resource management actions.

Learn more about national wildlife refuge system lands. Trapping may be used to protect endangered and threatened species or migratory birds or to control certain wildlife populations. The U.S. Fish and Wildlife Service also views trapping as a legitimate recreational and economic activity when there are harvestable surpluses of fur-bearing mammals. Outside of Alaska, refuge system lands that permit trapping as a recreational use may require trappers to obtain a special use permit. Signs are posted on refuge lands where trapping occurs. Contact the district manager for specific regulations.

If you are interested in an easement or special use permit, please contact us. Of course, not all projects qualify for assistance, but contacting us is the first step.

To better accomplish our grassland management objectives, we sometimes utilize agricultural practices to manage and enhance habitat for wildlife. If you are interested in grazing livestock or harvesting hay on Wetland Management District lands, please check here for available opportunities.

Apply for a Special Use Permit on National Wildlife Refuges

Some commercial, recreational and research activities are allowed on national wildlife refuges only with a special use permit issued by the local office, and are subject to specific conditions and fees. This permit requirement is meant to ensure that all activities at the federal site are...

Wildlife-related criminal activity should be reported to your local Minnesota Department of Natural Resources Conservation Officer or to federal wildlife officers through the FWS TIPS hotline or via email. Help Protect Our Wildlife! Turn In Poachers!

The National Wildlife Refuge System is managed by the U.S. Fish and Wildlife Service, an agency within the U.S. Department of the Interior. The U.S. Fish and Wildlife Service is the primary federal entity responsible for conserving and enhancing the nation’s fish and wildlife populations and their habitats. Although our agency shares this responsibility with other federal, state, tribal, local and private entities, we have specific trust resource responsibilities for migratory birds, threatened and endangered species, certain anadromous fish, certain marine mammals, coral reef ecosystems, wetlands, and other special aquatic habitats. We also has similar trust responsibilities for the lands and waters we administer to support the conservation and enhancement of all fish and wildlife and their associated habitats.

National wildlife refuges and wetland management districts are special places where wildlife comes first. All activities allowed on refuges and districts must be evaluated to make sure each activity will not conflict with the reason it was founded. The National Wildlife Refuge System has special regulations about what you can do during your visit. You can find these regulations in the 50 Code of Federal Regulations - Subchapter C.