Refuges use a wide range of land management tools based on the best science available. The management tools used are aimed at ensuring a balanced conservation approach where both wildlife and people will benefit.

Historically, wildfire was an integral part of the coastal prairie ecosystem. Fires from lightning strikes would sweep across the landscape maintaining the grasslands and keeping trees and brush from becoming established. Today, federal wildland firefighters work closely with refuge biologists to mimic what used to occur naturally through controlled, or prescribed burning. Controlled burns help maintain the coastal and inland prairie, upper saltmarsh, and freshwater wetlands by removing dead grasses and woody vegetation.  Fire recycles nutrients back into the soil and encourages the growth of native plants that are adapted to fire. Controlled burning removes potentially hazardous ‘fuels’ that left unburned, will accumulate and ultimately burn hotter and be much more destructive to the habitat and dangerous for our adjoining communities.

The refuge conducts prescribed burns on a rotational basis, burning approximately every four to five years or more often if the habitat will benefit from increased fire. Fire staff monitors weather and fuel conditions to ensure the burns achieve the best results for the habitat with minimal impact to the refuge’s human neighbors. They work closely with other partners and communities to protect people and property while maintaining the refuge’s healthy and productive ecosystems. The Texas Mid-Coast National Wildlife Refuge Fire Program is dedicated to protecting life, property and natural resources. 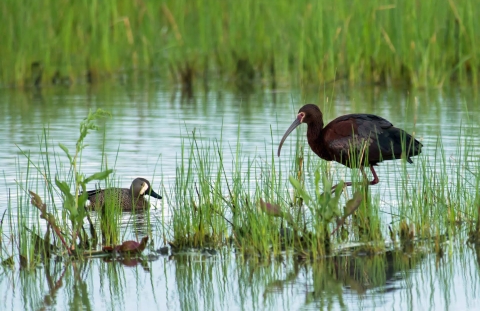 Because of the significant loss of wetlands, one of the refuge’s top priorities is providing freshwater wetlands among the coastal environments. To do this, Brazoria National Wildlife Refuge has constructed shallow wetlands utilizing roads, levees, and water control structures to hold or flush water from the units. Different strategies are implemented according to the time of year and types of birds using the refuge. Although rainfall is the principal source of water, during droughts the refuge must supplement rainfall using ground water pumped from wells or even purchase water from the local water authority.  Although this option can be expensive, during severe droughts Brazoria National Wildlife Refuge may have the only ponded freshwater for miles around.

It is necessary to ensure water levels are maintained to promote food production. This requires the right amount of sunlight and water depth to support abundant and diverse populations of invertebrates and submergent and emergent native plants. Invertebrates, including insects, are an important protein source for waterfowl and shorebirds. Seeds and plant parts (leaves, roots, and tubers) provide energy and essential nutrients for wintering waterfowl. Often, mechanical or chemical manipulation, as well as burning may be required to promote native vegetation and set-back succession to increase productivity.

Natural habitats are increasingly invaded by nonnative or invasive species invasive species
An invasive species is any plant or animal that has spread or been introduced into a new area where they are, or could, cause harm to the environment, economy, or human, animal, or plant health. Their unwelcome presence can destroy ecosystems and cost millions of dollars.

Learn more about invasive species . The refuge tries to combat this invasion by restoring or mimicking historical processes when possible. If this option isn’t available, we must resort to mowing or mulching or herbicide application to control these species. A few of the more problematic invasive plants that the refuge deals with are Chinese tallow and Macartney rose in prairie habitats and saltcedar and phragmites in freshwater wetlands.

Invasive animals can also be an issue and displace native species or compete with them for resources. Feral hogs are omnivorous, consuming eggs as well as young wildlife and destructive to habitats. Hogs degrade natural habitats by creating disturbed soil beds for invasive plants while rooting for acorns, pecans, and grubs.

Brazoria has about 1,200 acres of rice fields that are rotated and planted every three years. Approximately 400 acres of rice are planted by a cooperator each year.  Although the farmer harvests a portion of the rice, part of the second cutting is left in the field as a food resource for migratory birds. Rice is a high energy food that attracts wintering waterfowl and sandhill cranes to the refuge. In addition, fallow fields can be flooded, providing additional food resources as emergent annuals like barnyard grass and smart weed grow in the shallow wetlands.

Refuges use a wide range of land management tools based on the best science available. Some refuges use prescribed fires to mimic natural fires that would have cleared old vegetation from the land helping native plants regenerate and local wildlife to thrive. Other refuges contain Wilderness areas where land is largely managed in passively. The management tools used are aimed at ensuring a balanced conservation approach where both wildlife and people will benefit. At this field station our conservation toolbox includes prescribed burning, wetland management, rice farming and invasive species invasive species
An invasive species is any plant or animal that has spread or been introduced into a new area where they are, or could, cause harm to the environment, economy, or human, animal, or plant health. Their unwelcome presence can destroy ecosystems and cost millions of dollars.

Camping and open fires are prohibited.

Pets must be on a leash while on the refuge.

Persons possessing, transporting, or carrying firearms on National Wildlife Refuges must comply with all provisions of state and local law. Persons may only use (discharge) firearms in accordance with refuge regulations.