Weather reigns (and rains), but the research goes on

That question (along with “what’s the weather going to be tomorrow?”) might be one of the most commonly asked in Alaska, and for good reason. Weather dictates our travel and activities.

Weather is especially important for the field biologists of Alaska Maritime National Wildlife Refuge who spend their summer studying seabirds. Each May, five crews migrate out to remote islands scattered from the north end of the Bering Sea to the west end of the Aleutian Islands to Southeast Alaska. Weather dictates every move they make for the next few months, and it can be a tough master.

Here’s a June 1 report from the crew of the Research Vessel Tiĝlax̂, the refuge’s means of establishing and resupplying research camps spread out over thousands of miles of coast:

“The crew spent the day on Hall Island, at 60.65 degrees latitude north, getting Kevin and McKenzie settled into their “summer” home (I type summer ironically, given that it didn’t even make it above 34 degrees today).”

From the crew near Sitka in Southeast Alaska, in late June:

From near Unalaska in the Aleutian Islands:

“Last night the wind made the cabin rattle and shake all night long.”

From way up north in the Bering Sea:

“As we exited our tent, we saw that today’s serving of fog was the extra dense wet kind.”

On Chowiet Island, located on the east side of the Alaska Peninsula in a cluster of islands known collectively as the Semidis, a crew of two biologists huddled in the chilly July shade while overlooking cliffs full of murres. It was a sunny day, but the sun didn’t reach their station until 11:30 in the morning. They wrote:

“We feel sorry for some of the murres who, it turns out, only get half an hour of sun a day before going back to the shade. They may prefer it, though, to the murres down low who were already panting by noon.”

Only two days earlier, the crew of the R/V Tiĝlax̂, en route to resupply the Chowiet crew, reported:

“Some folks may refer to Chowiet as the banana belt, but our second trip to the Semidis remained well north of tropical. Big swells, driving mist, and strong winds deterred our plans for the day. The chop off the stern was so bad I saw a fulmar get taken down by a wave. Not often you get to see a tubenose surprised by the sea…”

The ship had to alter its route and rendezvous time because of the weather.

But weather is just a symptom of the larger pattern of climate. Take all the weather records from all the years people have recorded them, and you get a bigger picture: that’s climate. Many of the islands in Alaska Maritime National Wildlife Refuge are part of one climatic zone called “oceanic.” That means it’s not usually very hot nor very cold: the ocean buffers temperature swings.

The ocean happens to be a bountiful source of moisture along the Alaska coast, often delivered courtesy of the wind:

“Gusty winds and wet fog was our jam for most of the day.”

“Rain and wind slammed into the cabin, shaking us awake and convincing us this was the day to catch up on data entry while we waited for the Tiĝlax̂ to arrive.”

But weather can’t stop biologists from completing their work. It just makes it, occasionally, miserable.

“Like proper Alaska Maritime field technicians, we masochistically conducted field work during some inclement weather today. It could not be avoided.”

“We got 2 plots done before it started pouring so heavily our fingers were pruny and numb and the ground started giving way beneath our feet much more readily than was appropriate to be out there, so we slimed our way back to the cabin like slugs, shedding mud instead of mucus, and plugged away at our data backlog.”

Why do researchers stick with it through mud and rain and wind? They’re dedicated to search for answers to critical questions about our future. Measuring the health of seabirds that make their living from the water can also tell us about the health of the ocean on which we all depend.

Although some summers may feel cool and wet for many Alaskan coastal dwellers, the ocean can suffer heatwaves just like on land, with dire consequences. From 2014–2017, marine heatwaves struck the North Pacific Ocean, causing die-offs of plankton and other small organisms at the bottom of the food chain. Impacts rippled up, causing fish to die of stress and starvation, then seabirds and marine mammals. It was the largest die-off of seabirds in Alaska’s recorded history.

How are seabirds doing now, after that time of peril? How will warming air and ocean alter weather and water conditions in the future? Answering questions like these means doing research and monitoring seabird populations over a long period of time. For refuge biologists, the only way to get answers is to get out and live with the weather along with the seabirds on their nesting islands.

Even in tough weather conditions, though, there is joy in sharing space with all of the newly hatched chicks in their misty homelands. From the western end of the Aleutians:

“Coffee was enjoyed on the porch as the crew watched a fledgling whiskered auklet wander around the bunk cabin. Our new friend seemed to enjoy going up and down the porch steps and spent most of the day with us.”

And there is inspiration, too:

“I hope to be a fraction as devoted a parent one day as these gulls are to their chicks.” 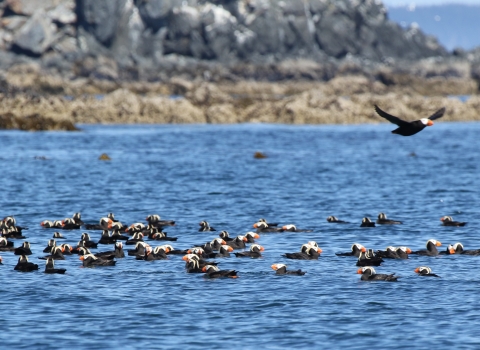 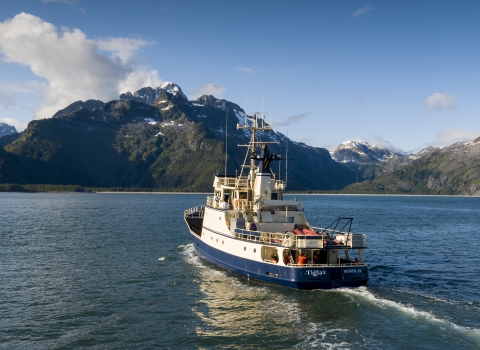 Science and Technology
Sailing the Oceans of Alaska