Spring is time for new growth and new beginnings! Amphibian species emerge from their winter retreats and move to their breeding sites, where loud breeding calls of wood frogs, spring peppers, gray tree frogs, pickerel frogs, and northern leopard frogs can be heard. Early pops of color are displayed by spring ephemerals like jack-in-the-pulpit or trout lily scattered around. Fields and woodlands start to look green again, seedlings break through the soil and tree’s buds start to grow out into leaves. Flocks of migrant bird species make their arrival from their wintering grounds such as Baltimore orioles, scarlet tanager, eastern towhee and turkey vultures. Many species' newborns like gentle goslings and baby cottontails are out exploring their new world.

Summer is a bustling time for all species. Many flying insects, who spend  most of their life under water, are emerging and taking flight including dragonflies, damselflies and mosquitos. Great blue herons are a common site, wading in the shallow waters, sometimes frozen like a statue, waiting to capture it's next meal. Reptiles, including painted turtles, black rat snakes, and the Massachusetts threatened Blanding's turtle, are taking advantages of the warm temperatures and are basking in the summer sun. The fields and meadows became seas of grasses and wildflowers, creating perfect habitat for many species, including sparrows and pollinators like bumble bees. The woodland mammals such as red squirrels and weasels are busy searching for forging, hiding out in the shade and weaning their offspring.

Autumn is the calm after the hectic humid summer season. Migratory birds like chimney swifts, Canada warblers, green herons, and raptors leave for warmer wintering locations. Many owls, like the great horned owls are more vocally active in fall because the new juveniles and adults are defending territories. Animals of all sizes from small chipmunks to big black bears are starting to stock up caches and their stomachs with fruit, beech nuts, acorns, and hickory nuts. White-tailed deer activity is high right now because the breeding season called “the rut”.

Winter might be the quietest time of the year, yet wildlife is still all around us. Many songbirds stick around in colder elements like cedar waxwings and our state bird, the black-capped chickadee. Small mammals like mice and voles create tunnels under the snowpack, trying to outsmart the clever coyotes and foxes hunting for them. North American river otters are often seen sliding down snowy hills and eating fish on the riverside. We have many hibernators here too, such as groundhogs, insects, snakes, turtles, amphibians, and bats. One of our most impressive hibernators is the wood frog, who has special proteins in their blood which allows them to almost freeze entirely and then “defrost in the spring”. 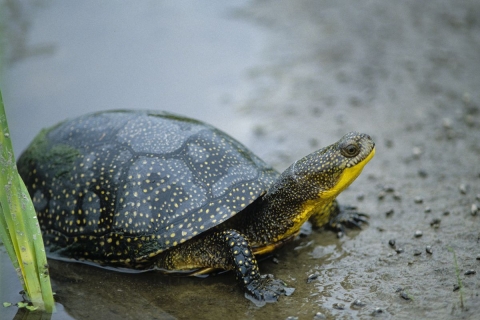 Oxbow National Wildlife Refuge was created for the conservation of a variety of wildlife species, with a special emphasis on migratory waterfowl and birds that are dependent on grassland and shrubland habitat. The refuge biologists conduct several population surveys focused on American woodcock, marsh birds, breeding birds, frogs, and toads. Oxbow currently supports the largest known population of the state threatened Blanding’s turtle in the Northeast. Refuge staff trap the turtles to evaluate population levels, manage sandy soil turtle nesting habitat, and conduct nest surveys with some turtle eggs being extracted to be “head-started” with the help of local organizations and schools.