The work that we conduct at the refuge focuses on understanding the needs of endangered species; developing strategies to combat climate change climate change
Climate change includes both global warming driven by human-induced emissions of greenhouse gases and the resulting large-scale shifts in weather patterns. Though there have been previous periods of climatic change, since the mid-20th century humans have had an unprecedented impact on Earth's climate system and caused change on a global scale.

Learn more about climate change impacts to habitat such as sea level rise; and habitat management for a variety of species, but primarily migratory birds.

The majority of the refuge’s 48,000 acres is comprised of salt marshes, beaches and dunes that are vulnerable to storms and sea level rise.   We are working to improve the condition of these coastal habitats so that they have the best chance of persisting into the future.  This effort entails focused monitoring  that helps improve our understanding of the factors contributing to habitat degradation so that we can develop targeted strategies to address it.   In many cases the refuge’s coastal habitats are adjacent to neighborhoods and other development that benefit from the shelter provided by salt marshes and beaches.  Among recent projects, the refuge used dredge material to restore marshes impacted by ditching and tidal restriction and has augmented beaches to help slow the rate of shoreline erosion.

Endangered species are a key emphasis of our monitoring program, particularly where refuge habitats serve a key role a species’ life cycle.  For example, both piping plover and red knot depend on the refuge’s barrier islands of Holgate and Little Beach.  These Federally-designated wilderness areas are part of a vast area of undeveloped beaches, dunes, saltmarsh and tidal flats that serve as a true refuge for numerous plant and animal species that are dependent on coastal habitats along a coastline where human development otherwise predominates.  A robust monitoring and management program focused on piping plover and other coastal birds helps ensure that the refuge continues to offer these species high-quality habitat along the coast of New Jersey.

In 2021, hundreds of birds associated with beach habitat started substantially using a newly formed island off of Little Egg Inlet. The refuge is working with NJDEP and partners to monitor these birds. The NJ Tidelands Council permits closure to the public March 1 through September 30 until 2026 to better understand this dynamic environment. For more information see the Management Plan.

We monitor the populations and distribution of key species of conservation concern that use refuge habitats, including swamp pink, sea-beach amaranth, piping plover, red knot, black rail, saltmarsh sparrow, American black duck.  Our work contributes to broader efforts to track population trajectories and helps inform our efforts to maintain and improve habitat for these species. In addition to our own monitoring efforts, we facilitate and support the work of partners who access the refuge to conduct research and monitoring that supports our collective conservation efforts. 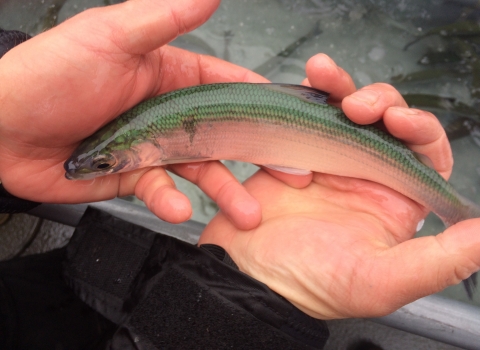 The cisco (Coregonus artedi) and the bloater (Coregonus hoyi) both played critical roles in the trophic dynamics of the Great Lakes. They were the primary native prey species for top predator fish such as the lake trout. By the 1950’s, however, overfishing and competition with non-native, plankton-eating prey fish (alewife) caused the collapse of these native prey species, and subsequently... 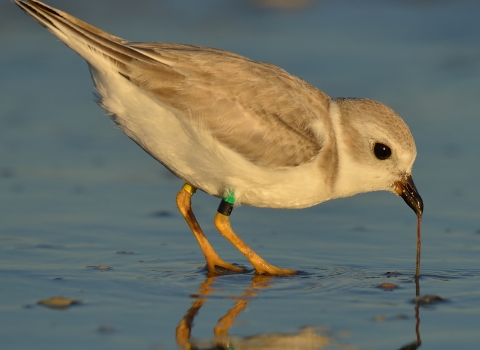 Endangered species are a key emphasis of our monitoring program, particularly where refuge habitats serve a key role a species’ life cycle.  For example, both piping plover and red knot depend on the refuge’s barrier islands of Holgate and Little Beach.  These Federally-designated wilderness areas are part of a vast area of undeveloped beaches, dunes, saltmarsh and tidal flats that... 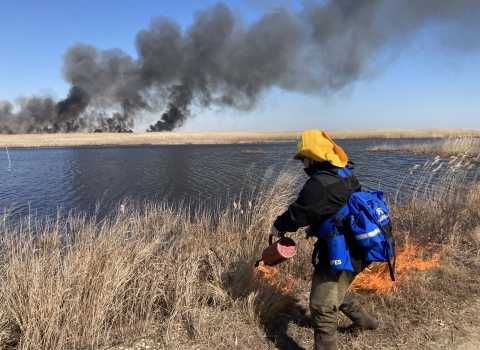 Image Details
The Use of Prescribed Fire at Forsythe

Prescribed fire is an effective tool for the management of grassland and early successional upland habitats. In pre-colonial times, the Lenape tribes would use fire to reduce the abundance of dense vegetation to expose the soils for agriculture. Wildfires caused by lightning strikes would also be beneficial to upland forested habitats by clearing the forest understory, allowing fire-dependent...

The Use of Prescribed Fire at Forsythe 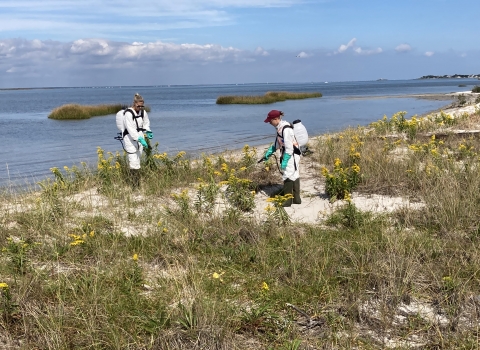 Invasive species, primarily plants, are found throughout the refuge. Invasive plants outcompete native vegetation, creating monotypic stands of undesirable vegetation that have little to no wildlife value. Refuge biologists go into these invasive habitats with iPad tablets to map the locations of the plants. Located invasives are marked in a grid map system with each grid being 50 by 50 meters... 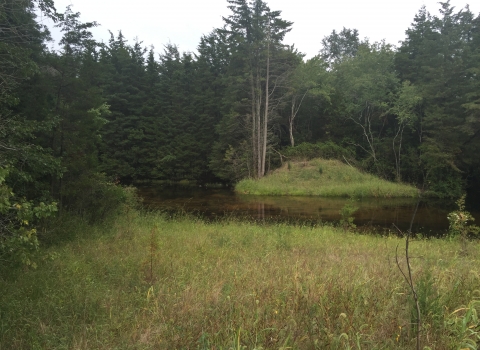 In the 1920s, a dam was constructed within Westecunk Creek in Eagleswood Township along Silver Lake Road to impound water for local cranberry bog development. The barrier hindered the passage of year-round resident and migratory diadromous fish (those that move between fresh and salt water at different points in their life) during low flow conditions. With funding from Hurricane Sandy recovery... 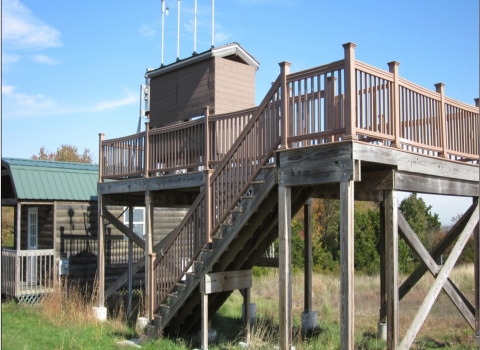 NADP (National Atmospheric Deposition Program), IMPROVE (Interagency Monitoring of Protected Visual Environments), and the RAWS (Remote Automatic Weather Stations) are partnership programs that monitor climate and weather, not only for the refuge, but as part of a larger monitoring effort that covers multiple eastern states. Additionally, every state (except Hawaii), Puerto Rico and the... 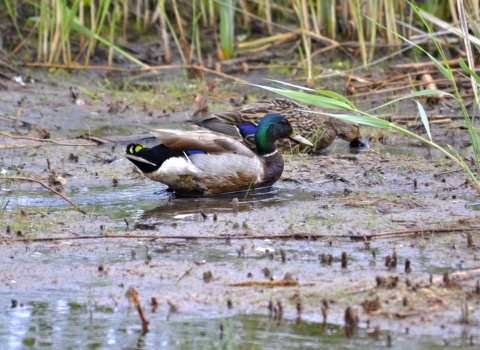 The North West Pool and South West Pool impoundments are managed to provide optimal habitats for migrating and wintering shorebirds and waterfowl. Water levels can be manipulated to provide adequate water for birds to drink, preen, rest, and feed. The water levels between the two pools can be managed independently from each other. One of the primary benefits from this management is the ability...