Carol of the Birds: A Christmas Bird Count Story

Image Details
'Tis the season for cold feet, happy hearts, and birds
A refuge manager's perspective on this annual census

We started down our path to the tune of trumpets bugling and tundra swans whooping. It was wet but not rainy and cold but not snowy. The Christmas Bird Count is a holiday of a different family gathering. That of the birding community and the birds are the pageant.

My first Christmas Bird Count was a few decades ago in the hot desert that separates Arizona and California at Imperial National Wildlife Refuge. The Colorado River seemed to narrow and fade by the hour, but at sunrise, the birds were heavily at play. Birds were my daily chorus, my companions, and my seasonal gauges. I learned all their names, tail flicks, wing bars, and cadences. Western grebes had shaded eyes like those of the Arizona cowboys. Ridgeway’s rails clapped from the reeds and cactus wrens raised a brow from deep within the cholla. Years later, after moving around and spending some time out of the field in a regional position, my tools dulled, the species shifted and my ear waned.

Now back in the field at Ridgefield National Wildlife Refuge Complex, the Christmas Bird Count circled around in its annual pirouette, and I was there to take its hand. Since coming to the Pacific Northwest, my roughened birding skills have become woefully apparent to me. Some birds have familiar faces, but many are new or use their habitat in much different ways. This was a language unpracticed. Eric Anderson, the deputy project leader at the complex, was born and raised in the Pacific Northwest. He is a manager, an educator, a fire fighter, and a biologist. The birds are his language, and the habitat is his home. I refer to him as our “solid oak.” He is steady, patient, dependable, humble and the guy just really knows his stuff. He graciously offered to pair with me for the bird count and I was honored to join him.

One hundred and twenty swans decorated the lakes, images of grace and sounds of car horns. Northern shovelers and pintails weaved in and out and canvasbacks snuck into the mix with unassuming ease. The buffleheads flashed their white winter earmuffs and the sounds of cormorants cut the air above us. Sandhill cranes framed the waterways with raspberry berets and Eric noted their numbers in his worn write-in-the-rain Christmas Bird Count book.

We wandered down the gravel trail and through the wet grass. The blackberry held our boots as we climbed over green-carpeted stumps and under archways of leafless limbs. Two bald eagles perched wing to wing and watched us from overhead, their calls bouncing off large oak trunks and back again. The trail opened to the flutters of tiny wings, challenging us to identify them. Eric’s binoculars pinballed the trees and he began calling out names by sight and sound.

A red-breasted sapsucker was front and center, vibrant and showing off its food finding savvy. We studied the silhouettes of the downy and hairy woodpeckers, squinting at their beaks and waiting for a defining chirp. The crows and ravens cried out in the distance and the chickadees and nuthatches danced in the forefront. Ruby and golden-crowned kinglets royally regaled, and the spotted towhees pierced the green moss with their orange breast. We walked along a hallway of song sparrows, varied thrushes, and bushtits, navigating the branches like a ribbon through a loom.

“That is a Pacific wren” Eric pointed out. This was a new bird for me. “They are tiny cave dwellers. They like the cold, dark, damp areas that don’t seem like the ideal place to stay.” We watched the tiny wren meander through the dark cervices of a large fallen root ball like a forest mouse. I found myself equally entranced by the wren’s presence as what it did to Eric. He appeared to love it simply for its being, and watched it with adoration, kindness, and maybe even some sadness. I began to love it myself for all of its unique characteristics, but perhaps more because of what it inspired in Eric. A kindred biologist connecting with a kindred being.

I loved the nostalgic chorus, the winged companionship, these seasonal gauges but as I looked around, the richness of this land called my eyes to the ground. The soft cottonwood leaves browned and broken settled into the damp soil below us, dying, mulching, bringing life. The freckled oak gals reclined on their leaves like ornaments that rolled away from their tree, while others blackened with wasp-pierced beauty or hung in clusters, weathering the frosts. Cold damp bark hosted villages of small yellow mushrooms, subtle hints of the networks thriving below. A robin’s opus of grass and twigs rested above us in a delicate cup. Small wooden caps lay vacant of their acorns, lonesome mittens with nothing to fill them.

Our feet cold and hearts content, we drifted back the way we came. The Christmas Bird Count came and went, numbers tallied, and boots muddied. Yet, somehow I felt renewed. Tomorrow is another day. “I need to do this more often,” I said to Eric. He quietly acknowledged and the resounding trumpets continued their pageant.

Note: The Christmas Bird Count is the nation’s longest running citizen science project. The annual bird survey takes place between December 14 and January 5. You can participate in a bird count near you, at a national wildlife refuge national wildlife refuge
A national wildlife refuge is typically a contiguous area of land and water managed by the U.S. Fish and Wildlife Service  for the conservation and, where appropriate, restoration of fish, wildlife and plant resources and their habitats for the benefit of present and future generations of Americans. 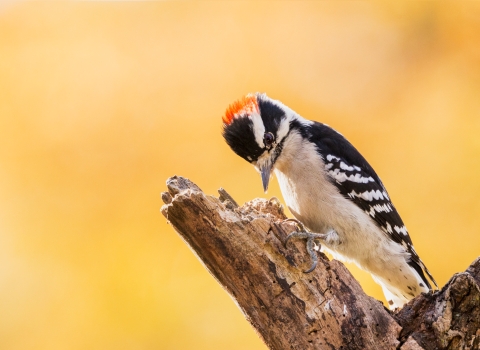 Get Involved
’Tis the Season for the Christmas Bird Count