For a small, colorful fish with vibrant orange and blue stripes, the future of its survival in West Virginia and Virginia streams is drastically becoming gray and bleak. The candy darter and its beautiful colors are disappearing from their habitat as pressure increases from a rival fish species introduced into its waters. The variegate darter outcompetes the candy darter for food, habitat, and even mates, as hybridization of the two species can cause the candy dater’s colors and its genes to fade from its streams.

With a team of dedicated partners including West Virginia Department of National Resources and West Virginia University, biologists at White Sulphur Springs National Fish Hatchery in West Virginia are developing techniques to propagate and translocate candy darters to boost their populations and return them to streams they were once found.

Candy darters are small, about two to three inches long, but play a large role in river ecosystems and food chains. In addition to hybridization, the candy darter’s decline can also be attributed to habitat degradation, pollution, and geographic isolation. Nearly half of the 35 known candy darter populations have been extirpated since the species was first described in 1932. In November 2018, the U.S. Fish and Wildlife Service listed the candy darter as endangered under the Endangered Species Act.

A major breakthrough in candy darter conservation came last year when staff at White Sulphur Springs developed a new, innovative way to replicate the specific candy darter habitat that is crucial to their survival and reproduction. The darters need shallow, rocky stream beds with fine pebbles and gravel to reproduce. Additionally, the tiny fish are easily stressed and require extra care in transport.

Another year of achievements

A new year brought new successes to the hatchery and a brighter future for candy darter. Caring for candy darter brood stock is a monumental challenge and there is always room for improvement. This year, staff aimed to reduce any possible stressors facing the fragile candy darters at the hatchery. Reducing stress of the brood stock improves their overall health, increases their changes of successful reproduction, and allows them to quickly acclimate to their surroundings in captivity.

Biologists put careful consideration into how they collected the brood stock candy darters to reduce stress. Kick-seining nets were used for collection to gently capture adult candy darters, making the transition to the facility easier on the fish. Additional advancements were made to improve the water quality with reverse osmosis technology. This process ensures the water is clean and pure, mimicking the cool, fast-flowing streams where darters are found in the wild. With improved techniques and controlled habitat, the candy darter brood stock thrived at the hatchery.

Even with all their hard work paying off, it was still a challenging year for the hatchery staff and their candy darter spawning efforts. The biologists  began their spawning efforts with only four mature, breeding males, limiting the number of spawning pairs and greatly reducing the number of eggs produced. Remarkably, this year the hatchery produced 30 healthy eggs, with 27 of the eggs successfully hatching and 21 of those growing into healthy juvenile darters.

Despite working with a limited number of healthy eggs, one of the greatest achievements of the year can be seen in the survival rate of the healthy eggs spawned at the hatchery. Thanks to improved conditions and a nearly stress-free environment, the survival rate from hatching eggs soared to 78% - a staggering increase from last year.

At the hatchery, the small, vulnerable fry can grow while safe from the myriad of threats they would face in the wild, including predation, starvation, and being displaced down river to unsuitable habitat. The growth rate of the darters more was considerably higher than juveniles in the wild. In just six months, the juvenile candy darters were the size of the one-and-a-half-year-old fish in the wild, giving them a greater advantage to find food and avoid predation once released into the wild.

“We are quite pleased with the survival and growth of our juveniles, 78% survival from hatch is nearly unheard of and the growth rates far exceeded our expectations,” explained Andrew Phipps, hatchery biologist. “We are satisfied our changes from last year have put us on the right track.”

Once the fry were a safe size for tagging, about 2.5 inches, they were marked with a Visible Implant Elastomer, or VIE tag. The VIE tag consists of a gel that fluoresces under ultraviolet light and is placed near the darter’s pectoral fin. To ensure the safety of the small candy darters, hatchery biologists worked hard throughout the year with variegate darters to develop a safe tagging method that could be used on the growing candy darters.

With the great strides made in the last several years, the White Sulphur Springs National Fish Hatchery can now care for adult brood stock, spawn fish, and raise and tag the endangered candy darters for release into the wild.

This fall, all juvenile candy darters were released into the wild. This is the first ever release of hatchery raised candy darters, a conservation milestone that marks years of dedication to the survival of this colorful species. With the help of West Virginia Department of National Resources, a suitable, high quality habitat was selected in a stream where candy darters can thrive while isolated from variegate darter invasion by a dam.

“It was a long time and a lot of hard work by so many people. We played just one role in what was a big play,” said Phipps. “We are honored to get to work with this animal and all the folks who care so much about it. To finally get to release these animals after watching them hatch and grow for the past six months is so rewarding.””

This release marks the start of restoring this vibrant species back across Virginia and West Virginia streams and landscapes. 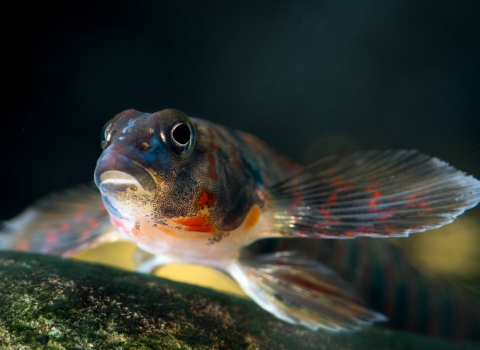