Because the refuge lands and islands are scattered along the whole Maine coast, the refuge has two offices. One is located in Milbridge, Maine, approximately 35 miles east of Ellsworth. Office hours are Monday - Friday, 8:00 a.m. - 4:30 p.m. The other office is located in Rockland (Visitor Center), heading toward Owls Head. Office hours are Monday - Friday, 8:00 a.m. - 4:30 p.m. except holidays, and on Saturdays from June through October, 11 a.m. - 4 p.m. Printed materials are available at both offices 24 hours a day.

To reach the Milbridge office:

Follow U.S. Route 1 to the center of Milbridge. Turn onto Water Street at the Gulf station. The office is a large white building on your left.

To reach the Rockland office and Visitor Center:

Follow U.S. Route 1 to the intersection with route 73 in downtown Rockland. Turn south on to route 73 for ¼ mile then turn left onto Water Street. The office is a large white building on your right. 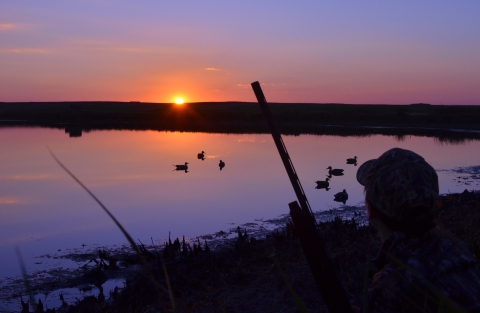 The refuge offers excellent opportunities for bird watching, hiking and photography. Foot trails wind through a variety of habitats, from spruce-fir woodlands to grasslands to freshwater and saltwater marshes to mudflats. On Petit Manan Point Division, the Hollingsworth Trail is a 1.8-mile loop with views of heaths and cobble beaches. Interpretive signs offer insight into refuge wildlife, habitats, and management. The Birch Point Trail (four miles round trip) begins in a blueberry field and leads to the salt marshes of Dyer Bay, passing through a mixed-wood forest.

The Gouldsboro Bay Division offers a 1.6 mile (round trip) Salt Marsh Trail hike through rolling conifer forest with two views of a saltmarsh and Corea Heath Division offers a 0.4 mile universally accessible trail to an observation platform overlooking the heath.

Commercial groups and researchers should contact the refuge to determine if a Special Use Permit is required.

Seabird islands are closed to the public during the nesting season, April 1 - August 31, to minimize disturbance to the birds. Commercial tour boats provide views of nesting seabirds on Petit Manan, Seal and Machias Seal islands. Islands are open for daylight use only from September 1 through March 31 but have no dock or moorings; sea conditions make landing hazardous.

Other Facilities in the Complex

To protect the refuge's wildlife and habitats, please comply with the following:

Bald eagles currently nest on Cross, Mink and Outer Double Head Shot Islands. A large saltmarsh is located on the western end of Cross Island. During the fall, thousands of waterfowl, songbirds, shorebirds, and raptors pass through on their southward migration. The northern half of both Double Head Shot islands is dominated by spruce-fir forest, while the southern end of the islands are predominantly covered by grasses and shrubs. A variety of seabirds nest on both the islands. Old Man Island is one of only six nesting sites for razorbills in the United States and four of them are part of the Refuge. Vegetation on the island is sparse, with rock outcroppings, steep cliffs, and sea stacks dominating the island.

Any islands supporting nesting eagles are closed to public access from February 15 to August 31.

Neotropical migratory songbirds thrive in the forests of the mainland divisions. These birds breed in North America and winter in the Caribbean, Mexico, and Central and South America. Recently, populations of species such as the American redstart, Swainson's thrush, and song sparrow, have declined due to habitat loss throughout their migratory routes.

The saltmarshes and mudflats of the mainland divisions attract waterfowl, wading birds, and shorebirds.

The former pastures and blueberry fields on Petit Manan Point provide nesting habitat for grassland birds such as bobolinks and savannah sparrows. In the spring, American woodcock use the clearings for their unique courtship displays. Whimbrels stop off here during their fall migration from the Arctic tundra to the southern United States. The Service maintains open areas through periodic mowing and controlled burning.

Petit Manan NWR includes 3,180 acres on 64 islands, stretching the entire coastline of Maine. The islands vary in size from 0.5 – 1,312 acres. Eight of the islands are predominantly forested with mature stands of balsam fir and red spruce. Eleven of these islands currently support active bald eagle nests. While the other 53 islands within Petit Manan Refuge may provide some forested habitat, their primary resource value is to the open herbaceous habitat that provides valuable nesting habitat for a variety of seabirds. Refuge staff monitor island resources and conduct biological surveys of the islands’ flora and fauna. Active seabird restoration projects are ongoing on Matinicus Rock, Petit Manan, Metinic and Ship

Seal Island is closed to public access year round due to the presence of unexploded ordnance.  For more information, contact Refuge Manager at (207) 594-0600. 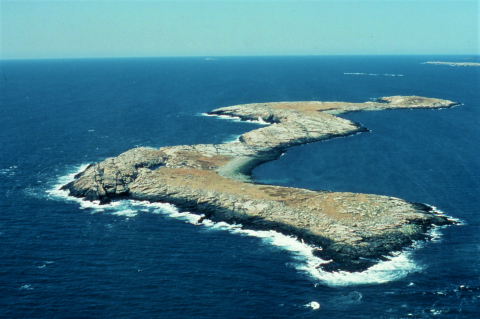 Commercial tour boats provide views of nesting seabirds and seals up and down the Maine coast. Check with the local Chamber of Commerce in Rockland for information on tour boats that may provide boat tours around Seal Island National Wildlife Refuge.

Seal Island is one of the most important colonial seabird nesting islands in the Gulf of Maine.  Boulder fields and ledges support a large colony of puffins, razorbills, black guillemots, and double-crested and great cormorants, grass/ledge areas for terns, raspberry and grass thickets for common eiders, and peat/glacial till substrate for Leach's storm-petrels. Seal Island is only one of five islands in Maine that host nesting great cormorants. The surrounding waters are rich with an abundance of food resources these birds depend on.  The island is an important stopover for migrating songbirds, shorebirds and raptors. 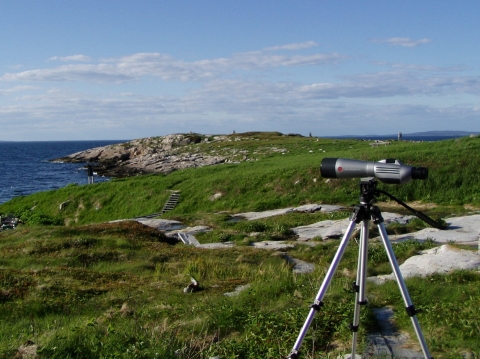 Seal Island is managed in cooperation with National Audubon Society and in 1970s successfully reintroduced Atlantic puffins to the island by transporting chicks from Newfoundland, Canada. Seal Island also supports one of the largest tern colonies in the Gulf of Maine, supporting over 2,100 pairs of Arctic and common terns. Each year Audubon and Refuge biologists collect information on seabird populations, food habits, and productivity, and work to control predators such as great back-backed and herring gulls. Seal Island is vegetated with a variety of grasses and forbs interspersed with granitic ledge and rocks.  Representative plant species include New York aster, beach pea, yarrow, raspberry, gooseberry, chickweed, shepherd's purse, creeping juniper, ragweed, and red fescue.

The Navy used the island as a bombing target from the 1940s until the early 1960s, the effects of the bombing and shelling can still be seen.  Small craters and scarred granite are abundant, but the rank growth of grasses and raspberry has concealed most of the damage.

Seal Island was listed on the State Register of Critical Areas in January 1976 for its unique value to nesting black guillemots and Leach's storm-petrels. At the time of designation, the island supported the largest petrel colony in the eastern United States with 2,000 pairs, and one of the largest black guillemot colonies, 200 pairs, in Maine. 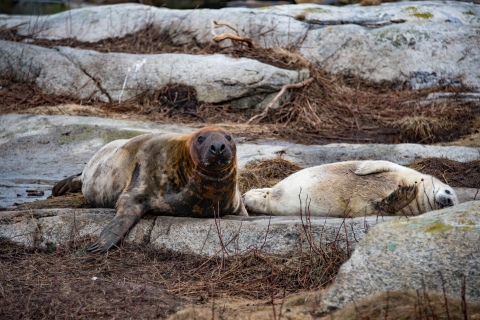 In 2000, Seal Island was recognized as the largest gray seal pupping island in Maine.  Harbor and gray seals are common throughout the year. Fin, minke and humpback whales are sometimes seen in the surrounding waters. Minkes, like terns and puffins, feed primarily on small herring, and often come into the coves on the western side of the island.

The U.S. Fish and Wildlife Service acquired the island in 1973 from the U.S. Coast Guard and established Franklin Island National Wildlife Refuge.

Franklin island was acquired by the U.S. Government in 1806 and the construction of the lighthouse was completed in 1808 for aids to navigation.  The third established lighthouse on the coast of Maine, it marked the way for sailors form Pemaquid southwest to Thomaston and throughout Muscongus Bay.  The U.S. Coast Guard manned the lighthouse for 160 year before automating it in 1967.  The U.S. Fish and Wildlife Service acquired the island in 1973 from the Coast Guard and established Franklin Island National Wildlife Refuge. The U.S. Coast Guard to this day still maintains the automated lighthouse tower aids to navigation.

Franklin Island National Wildlife Refuge is a 12 acre island located in Muscongus Bay, six miles off shore from the Town of Friendship, in Knox County, Maine.   The island has a very acidic, organic duff soil layer over glaciated granite and schists.  Maximum elevation is 35 feet, and the average tidal range around the island is nine feet.  Covered with eight acres of spruce trees and four acres of raspberry thickets, rugosa rose, and various grasses and forbs the island once supported one of the largest common eider colonies in Maine.

Franklin Island was listed on the State Register of Critical Areas in October 1977 for its unique value to nesting eiders.  Registry Title is "Franklin Island Eider Nesting Area".

Pond Island National Wildlife Refuge is a 10-acre island in the mouth of the Kennebec River adjacent to Popham Beach.

Pond island lighthouse was put in operation in 1821, making the hazardous entrance to the Kennebec River safer for mariners.  The island was a transfer point for steamboat passengers traveling from Bangor to Augusta.  In 1963 the U.S. Coast Guard automated the station and removed the buildings leaving only the lighthouse. The island was transferred from the Coast Guard to the Fish and Wildlife Service in 1973 establishing Pond Island National Wildlife Refuge.

Pond Island National Wildlife Refuge is a 10-acre island in the mouth of the Kennebec River adjacent to Popham Beach. The treeless character and grass, forb, and shrub cover provides excellent habitat for nesting seabirds. In 1996, the Service, Maine Department of Inland Fisheries and Wildlife, and the National Audubon Society initiated a tern restoration program on Pond Island.

In 1999, Pond Island produced its first tern chick in over 60 years, when 10 pairs of common terns successfully nested on the island. Since 1999 Pond Island has supported Common, Arctic and the endangered roseate terns. Common eiders also nest on the island and a variety of shorebirds, songbirds, and raptors stopover during spring and fall migration.