Between 1972 and 1980, the refuges in the Maine Coastal Islands National Wildlife Refuge Complex were established for the protection of migratory birds, principally colonial nesting seabirds. The Service has focused on restoring terns because their populations were particularly low. The roseate tern, a federally endangered species, prefers large colonies of common or Arctic terns in which to nest. Therefore, saving this species requires assisting the other two.

To restore terns to an island, it must first be made suitable for the birds again. This requires discouragement of herring and great black-backed gulls. In some cases, human presence on the island during the start of the gull nesting season is enough. Small populations of gulls can be controlled through egg and nest destruction and noise-makers. If a gull colony has grown too large, these techniques may be ineffective. Lethal means, including limited shooting and the use of an avicide, may be necessary. 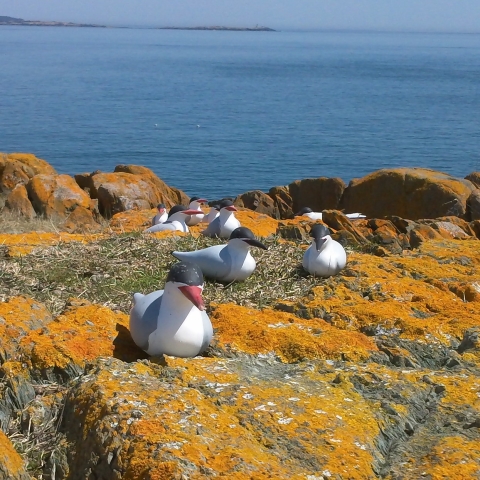 If terns have recently abandoned an island, they may return rapidly once the gulls are gone. However, in many cases, it has been decades since terns last nested on an island. To entice them back, the Service uses sound systems playing recordings of a tern colony and tern decoys scattered in suitable nesting habitat. This method has been highly effective on several islands within the Gulf of Maine.

Tern restoration began in 1984 on Seal and Petit Manan islands, which now support large colonies of common and Arctic terns. Roseates have returned to Petit Manan. More recent restorations have occurred on Pond, Metinic and Ship Islands. The goal is to establish tern colonies on numerous refuge islands. This will ensure that a singular catastrophic event such as disease, an oil spill, or a hurricane, will not wipe out a species.

Other colonial nesting seabirds have benefitted from tern restoration efforts. Atlantic puffins, black guillemots, common murres, razorbills, laughing gulls, Leach's storm petrels, and common eiders have recolonized some islands. Petit Manan Island now hosts all of these species during the nesting season. Razorbills, a relative of the extinct great auk, are at the southern end of their range along the Maine coast and nest on six islands and four are part of Maine Coastal Islands National Wildlife Refuge: Seal, Matinicus Rock, Old Man and Petit Manan. Herring and great black-backed gulls, great cormorants and double-crested cormorants breed on some refuge islands.