Firefighters at Buenos Aires Refuge Give Back to Local Kids

Eighteen years ago, the engine fire crew at Buenos Aires National Wildlife Refuge in Arizona gave a fire safety presentation at nearby San Fernando Elementary School in Sasabe, Arizona, a remote location along the border of the United States. The presentation centered around the basic principles of fire, how to remain safe if a wildfire were to occur, and how to practice fire safety at home.  Since that day, U.S. Fish and Wildlife Service firefighters have continued their involvement at the school at least once per month, not only teaching the children about wildland fire but hosting sporting events, card games, and other activities for the students. 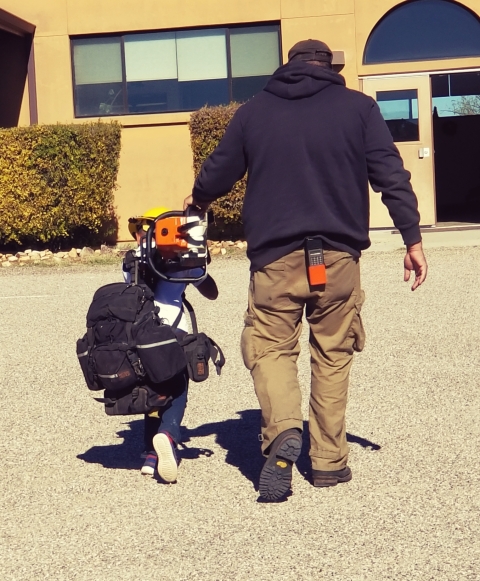 The refuge’s engine captain, Shawn Sullivan, has been involved with the students at the elementary school for all 18 years. His main motivation is to “just give back.” What started as a one-time visit has now become a passion and motivator for Sullivan and much of the fire crew at the refuge.

“Many of these children come from disadvantaged areas, with some waking with the sunrise to walk to school,” says Sullivan. “Being present in these children’s lives isn’t necessarily about teaching them about wildland firefighting. It’s about showing them what else is out there for them, and also being someone they can identify with and someone who has a positive influence on their lives through common interests.”

What started initially as a lesson about fire safety has evolved into a community relations campaign with USFWS firefighters hosting baseball games and physical agility activities with the kids. The fire crew also serves as a resource for students if they want to talk, need advice, or just want to maintain a healthy lifestyle. This healthy lifestyle is most easily taught through sports and other physical activities the students can participate in.

“As firefighters, we have to maintain a high level of physical activity,” says Sullivan. “We might as well work out with the local kids and teach them sports while we’re at it.” 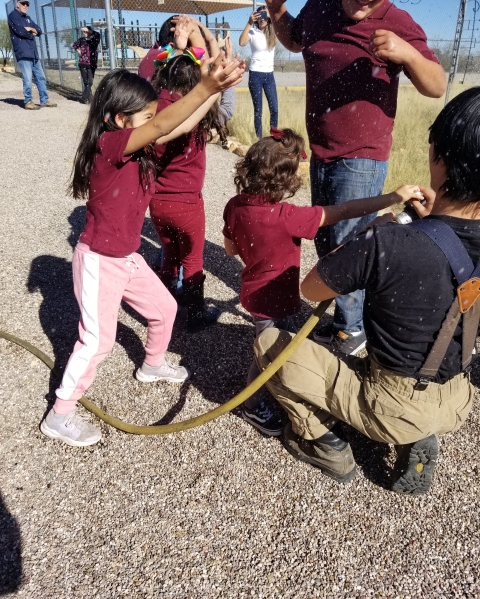 The Buenos Aires  engine crew is aware of the challenges the students face and hopes to provide an opportunity for them to identify with positive influencers in their lives.

Much of the surrounding culture identifies with the use of fire on the land, as well as the importance of maintaining defensible space around their homes. The experiences with the firefighters have provided a better understanding of fire and a strong connection with nature, allowing the students to appreciate the importance of fire on the landscape and identify common interest with USFWS firefighters.

Over the past 18 years, the Buenos Aires engine crew’s interactions with the students has transformed into a mentorship program, in which the students form bonds with a group of USFWS firefighters dedicated to serving their community and giving back.

Buenos Aires National Wildlife Refuge is nestled along the United States/Mexico border, an hour and a half south of Tucson, Arizona. The refuge encompasses over 100,000 acres of the Sonoran semi-desert grassland. Grasslands are inherently fire-adapted and thrive on periodic fire for their survival and to keep woody plants and shrubs from encroaching on their ecosystem. In general, the impact of fire on grasslands is dependent on when and how often fire occurs. The endangered masked bobwhite depends on the health of these grasslands. An important objective of the refuge is to protect and restore habitat for a variety of species, with an emphasis on the masked bobwhite. Prescribed fire is integral to this effort.

Buenos Aires has a robust wildland fire program, including six full-time firefighters. These firefighters come together to form an engine crew whose primary duty consists of applying prescribed fire to the landscape in the off-season and serving as a resource for suppression efforts during peak fire season. On average, refuge fire personnel assist in the suppression of 60 wildfires per year and apply approximately 40 prescribed fires to USFWS managed lands across the country.