Image Details
This invasive species threatens native pollinators, but the situation is much less dramatic than social media might have you believe 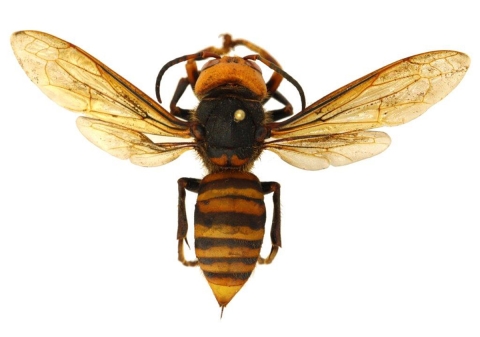 In recent history the interwebs has been a-buzz with the whisper of “murder hornets," properly known as Asian giant hornets. “Murder hornets,” what could be more sensational than two common fears that border on phobias for most people? Literally no one wants to be murdered and nearly everyone has had an unpleasant run-in or three with a hornet or a hornet posse. As a biologist who works on pollinators, as soon as I read the words being used to describe Vespa mandarinia, my heart dropped. You see, hornets are often mistaken for bees and bees of all kinds are in serious trouble right now. The last thing we need is the whole of the American public feeling terrified of yellow flying insects.

To be clear, hornets are close relatives of bees. They’re both in the Order Hymenoptera (the “membrane-winged” insects) along with ants and sawflies. In fact, hornets are believed to be evolutionary ancestors to bees from a way back up the evolutionary tree, but there are notable differences between hornets and bees. For example, hornets, unlike honey bees, lack barbs on their stingers making it possible for them to sting repeatedly when they are defending their nest or believe themselves under attack. The main difference between hornets and bees, though, is their diet. Bees, including the popular European honeybee (Apis mellifera), collect both pollen and nectar from flowers to support their hive, while hornets collect animal protein to support their offspring, usually in the form of immature insects. In short, hornets are predators.

Humans have a complicated relationship with predators. We are fascinated by them and, at the same time, are afraid of them. For large predators capable of catching and killing humans, that level of fear may be warranted, but to define the human relationship to all predators by fear of death is to discount the important and nuanced role most predators play in their respective ecosystems, especially when those ecosystems overlap with ours.

Hornets are a common predator that we encounter in our local ecosystems. They live in yards and gardens and parks and neighborhoods where we spend much of our leisure time. If we come across them by surprise, the encounter sometimes goes poorly for all parties involved. Usually, though, we go about our business, and they go about theirs. What is their business? Generally, when you encounter a hornet, she is either foraging for nest materials (chewing wood from fences and twigs) or searching for a tender insect to provision her nest. This search will sometimes lead them to your picnic or al fresco dining area where they may attempt to rob you of any meat you have laid out for yourself. And who could blame them? It’s delicious food after all. :)

That hornets continually collect food for their nest makes them great allies to gardeners. They groom plants, removing caterpillars and inch worms that dine on the stems, leaves, and flowers of the plants we grow, eliminating the need for harmful pesticides. For those who planted gardens in 2020, hornets should be welcome visitors, assisting you with producing delicious and healthful food, free of munching caterpillars and inch worms. Bees pollinate your plants while hornets help keep your plants healthy.

The news that “murder hornets” are invading our shores made waves throughout social media. Since then, Washington State Department of Agriculture has been actively and deciduously working with the public and other interested parties to monitor for the species.

In short, the name “murder hornet” may be rightfully frightening, but don’t let the overblown fear of a large insect deprive your neighborhood of the help of hornets and keep in mind that pesticides that kill hornets will also harm bees and ants, doing irreparable damage to your local ecosystem. Stay vigilant and report any suspected sightings of Asian giant hornets to WSDA. Though the apocalyptic hype as seen on social media may be overblown, the species does pose a very real threat to local pollinators and the economy of Washington State.