When a Law Enforcement K-9 Retires

The U.S. Fish and Wildlife Service takes care of those who provide public safety on the lands and waters it manages when retirement comes -- and that includes its four-legged corps.

So when the decision was made to retire 10-year-old K-9 Rudi, Federal Canine Officer Darryn Witt began to search for the perfect situation for the Belgian malinois, who had been his partner for eight years on the Upper Mississippi River National Wildlife and Fish Refuge. Rudi, who retired in February, is as happy and healthy and motivated as ever, says Witt, but at age 10, the dog “has earned” retirement.

“Rudi has been with me every minute of every workday,” says Witt. “We interacted with thousands of fishermen and hunters. Rudi made several cases by locating where game had been stashed and finding key pieces of evidence, like shell casings.

“I was anxious about Rudi retiring from an action-packed career to stay at home with nothing to do,” said Witt, who is now the Service’s national canine coordinator.

The answer to Rudi’s future came when Witt saw the 200-acre Rocking W cattle ranch in Cooper, Texas. “As it happened, Bob Welch, the owner, was looking for a working dog as a companion and to watch over his ranch,” Witt recalls. Bob had worked with dogs during his years as a veterinarian corps officer with the U.S. Air Force.

Rudi’s new responsibilities include riding around the ranch with Bob to check on cattle and being a companion to Bob’s 14-year-old daughter. Rudi even gets to swim in the farm pond.

The Refuge System has eight K-9 teams across the country and has had a K-9 corps for more than 20 years. Like other law enforcement K-9s, Rudi is highly trained. Raised for this work from puppyhood, Rudi began 10 weeks of basic handler training before his second birthday. He continued to train with Witt throughout his career, including advanced, annual courses in obedience and control, tracking/trailing and detection.

The Service also uses Wildlife Detector Dogs to sniff out illegal wildlife products being shipped into or out of the country.

Rudi has been an essential part of public safety. Some years ago, for example, a suspect in Iowa had run from a traffic stop into the river breaks. The runner had an outstanding arrest warrant. Rudi trailed him across a cornfield and found him hiding in a large root wad of a blown-down river maple tree. “The guy yelled, ‘Your dog found me. I give up’ and was apprehended without incident,” says Witt.

In daily circumstances, “Rudi was ‘roll on his back friendly’ everywhere we went,” Witt says.  “What is so amazing is that this same dog courageously put himself between me and a subject who was out of his mind with rage. In the blink of an eye, Rudi could pin down a subject and save me.”

“Rudi was always calm, content and quiet, but when it came time to work, he was tenacious,” Witt summed up. “Without Rudi, I would never have gone to the places I went or met the many friends I have. Rudi has been a true ambassador for the Service.” 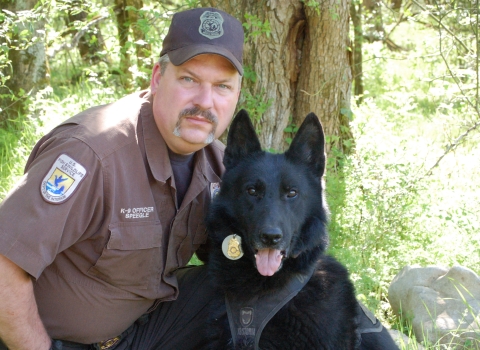 Our People
Taking Care of Our Own 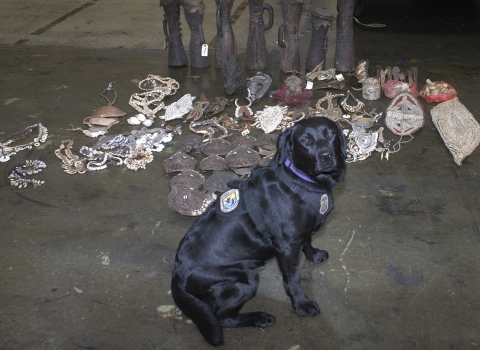