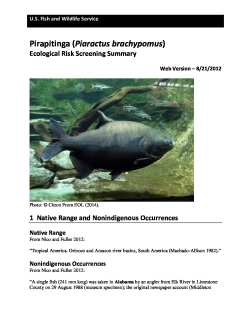 Species that are considered uncertain risk need a more in-depth assessment beyond the Risk Summary to better define the species’ risk to U.S. environments.

P. brachypomus has been introduced to several parts of the continental US, but has thus far failed to establish any known reproducing populations. However, its potential impacts have been reported and it is causing enough concern to be listed as a potential threat in some states.  Indications of ecological impacts from this species have been reported and its biological characteristics increase the risk associated with this species.