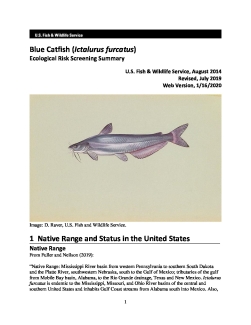 Blue Catfish (Ictalurus furcatus) is a freshwater and brackish water catfish native to portions of the Mississippi River basin, Texas, and Mexico. Stocking, aquaculture, and migration have all contributed to the spread of this species throughout much of the southern half of the United States. Impacts such as hybridization with native species, reduction of native fish abundance, and alteration of local habitats have been reported for this species leading to a high history of invasiveness. This species has a high climate match within the United States, with all states in the contiguous United States having individually high climate matches. The overall risk for this species is high.