Natchitoches National Fish Hatchery is involved with the restoration of threatened, endangered, and at risk species and propagation of recreational species to increase fishing opportunities across the south east.  Keep scrolling to learn more about the specific species we work with at Natchitoches.

The Louisiana Pearlshell Mussel (Margitifera hembeli) is a threatened freshwater mussel species that is only found in two parishes in the entire world.  Natchitoches National Fish Hatchery has been involved with the recovery of the species since 2010 when biologist started fish host trials and life history studies on the species.  Since that time, we have successfully transformed glochidia, raised juveniles, and released individuals back into their native stream.  There is still a lot of information to learn about the species and our biologist are constantly trying to improve the entire process from broodstock broodstock
The reproductively mature adults in a population that breed (or spawn) and produce more individuals (offspring or progeny).

Learn more about broodstock collection to stocking procedures.  The specific goals of the Louisiana Pearlshell program are to produce individuals for (1) reintroduction to conserve the species’ genetic diversity, which has already been affected by processes such as population bottlenecks and inbreeding depression; (2) to repopulate areas of local extirpations; and (3) to increase range-wide species’ distribution to alleviate population and species’ level risks from threats.  Program partners include the Louisiana Ecological Services Office, the US Forest Service, Louisiana Department of Wildlife and Fisheries – Wildlife Diversity Program, the Alabama Aquatic Diversity Center, and the USFWS Southeast Conservation Genetics. 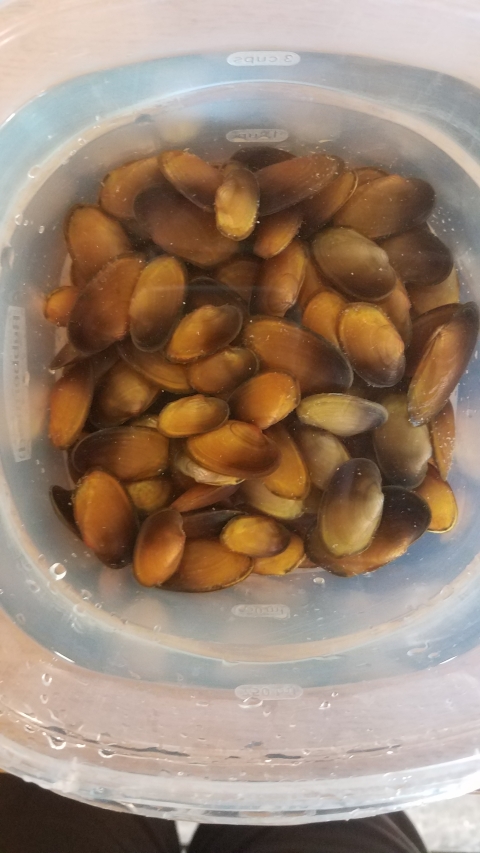 Paddlefish (Polyodon spathula) are a large, prehistoric fish species native to the Mississippi River Basin that are considered a priority species for the US Fish and Wildlife Service.  Known for their distinct "paddle-like" snout (called a rostrum) and sought after for their eggs for caviar, this species suffers from over harvest, habitat fragmentation (dams restrict movement within the river), and pollution throughout its native range.  Natchitoches National Fish Hatchery works with the San Marcos Fish and Wildlife Conservation Office (TX) and Tishomingo National Fish Hatchery (OK) to help with Paddlefish restoration efforts on Caddo Lake, TX.  We, along with our partner, collect adult Paddlefish from the nearby Red River, spawn the broodstock, and then raise the offspring to approximately 12 inches before releasing the fish into Caddo Lake.  All fish are tagged with a unique code which allows biologists the ability to identify propagated individuals during population monitoring.  This project began in 2022 with plans to continue this work in the future.  Other partners in the paddlefish program includes Louisiana Department of Wildlife and Fisheries, Texas Parks and Wildlife, and Baton Rouge Fish and Wildlife Conservation Office.

Alligator Snapping Turtles (Macrochelys temminckii) are the largest freshwater turtle in North America and are currently under consideration for listing under the Endangered Species Act.  Populations of alligator snapping turtles have been negatively impacted by by-catch from recreational and commercial fishing, illegal harvest, habitat alteration, and nest predation.  Natchitoches National Fish Hatchery began working with this species in 2016 when we agreed to hold turtles as part of an illegal trafficking case.  Soon the turtles began breeding on-site and staff started incubating and hatchling the eggs.  This led to our biologist gaining a tremendous amount of knowledge in all aspects of alligator snapping turtle culture.  Currently, the program is transitioning to focus more on head-starting with wild populations.  Head-starting refers to the process of removing naturally produced eggs from the wild, incubating/hatching eggs, and then raising the hatchlings in captivity to a size where they are no longer vulnerable to predation threats in the wild.  This management action should help alleviate the high egg/hatchling mortality often observed in wild populations.  Our Alligator Snapping Turtle program partners include Texas Parks and Wildlife, the Louisiana Ecological Services Office, and National Wildlife Refuges. 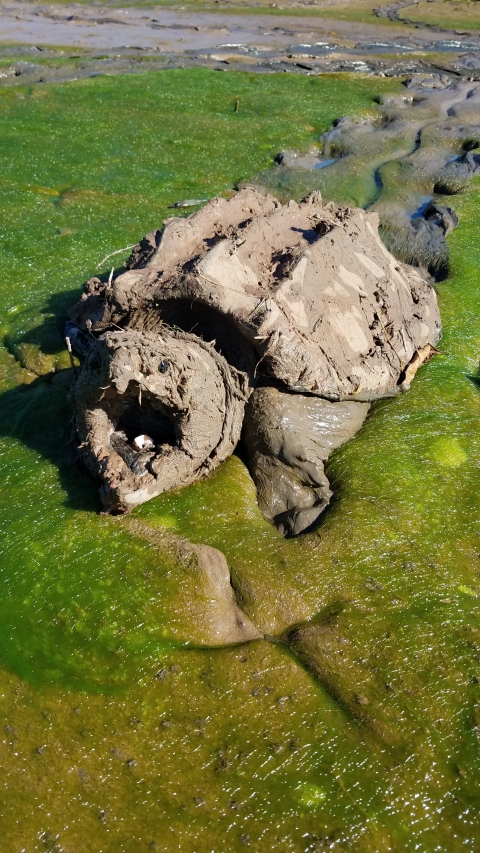 Gulf Coast Striped Bass (Morone saxatilis) are a popular game fish sought after by both sport and commercial fishermen with populations of the species historically found from Texas to the Suwannee River in Florida, although the only naturally occurring population is believed to be in the Apalachicola-Chattahoochee-Flint river system.  A cooperative agreement signed by Florida, Georgia, Alabama, and the USFWS guides the restoration of the species with the ultimate goal being to establish self-sustaining populations in at least 10 coastal river systems.    Furthermore, the restoration of interjurisdictional fish species is a priority as defined by the director of the USFWS and Natchitoches National Fish Hatchery is doing its’ part to help restore populations of Gulf Coast Striped Bass by acting as a grow out facility.  This means that our partners collect and spawn the broodstock, hatch out the eggs, and then transfer the newly hatched fry (only a few days old!) to Natchitoches for rearing to the juvenile life stage.  Our partners for the Gulf Coast Striped Bass program include Welaka National Fish Hatchery, the Florida Fish and Wildlife Conservation Commission, Alabama Game and Fish, and Georgia Division of National Resources.

Gopher Tortoises (Gopherus Polyphemus) are native to the southeast with populations west of the Mobile and Tombigbee Rivers listed as threatened.  This species suffers from habitat loss and fragmented as well as high egg/hatchling mortality.  The Nature Conservancy has been operating a Gopher Tortoise head-start program within the boundaries of Camp Shelby Joint Forces Training Center in Mississippi for years and Natchitoches National Fish Hatchery (NNFH) was asked to help with an additional head-start effort that focuses on areas in the surrounding DeSoto National Forest.  NNFH staff collect wild eggs, incubate/hatch the eggs at the hatchery, and then raise the hatchlings in captivity for 2 years before returning the juvenile tortoises to their native lands in southern Mississippi.  This program works with the nature conservancy, Jackson Ecological Services office, De Soto National Forest, and Mississippi Department of Wildlife Fisheries and Parks to help with this recovery effort.  Our first tortoise hatched in July 2022! 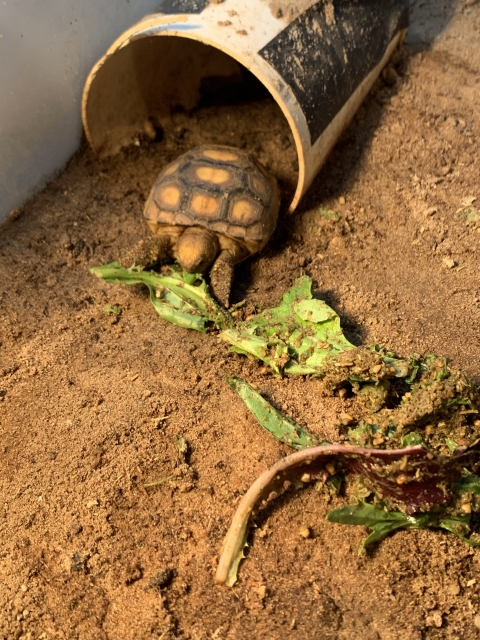 Natchitoches National Fish Hatchery partners with several state/federal agencies, military bases, and native American tribes to increase recreational fishing opportunities across the southeast.  Specifically, we serve as a grow out facility for Largemouth Bass (LMB) and Hybrid Striped Bass (STB) as well as spawn Bluegill, Redear, and Channel Catfish (CCF).  We typically receive LMB and Hybrid STB fry in the spring shortly after hatching and raise them in ponds for approximately two months until fish are 2 inches in length.  Around the same time, staff will place spawning cans (old time milk jugs) in our CCF ponds to provide cavities for the catfish to spawn naturally.  We routinely check the cans for eggs and will then ship eggs to our partners or raise the catfish on-site to the desired size.  Lastly, our Bluegill and Redear program focuses on pond spawning the species and allowing the progeny to remain in the ponds through the remainder of the summer.  These ponds are harvested in early fall for stocking.  All fish in these programs are transferred to our partners for stocking into public waters.  Specific partners include Louisiana Department of Wildlife and Fisheries, US Forest Service, Barksdale Air Force Base, and Colorado Parks and Wildlife. 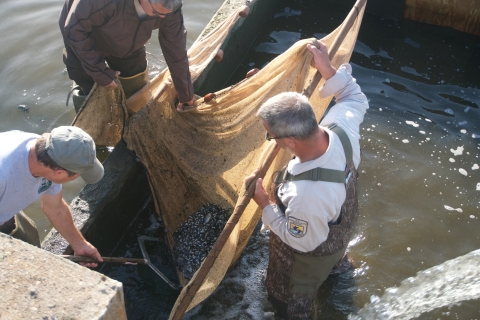 The Louisiana Pigtoe (Pleurobema riddellii) is an at-risk freshwater mussel that is currently under evaluation for listing under the ESA. Although the Pearl and Amite Rivers are outside of the Louisiana Pigtoe’s presumed range, several museum specimen that were collected in these rivers have been genetically identified as P. riddellii.  NNFH was contacted by the Lafayette and Jackson ES offices to help conduct surveys for Louisiana Pigtoe along these rivers, which will aid the species status assessment and allow staff to learn locations of potential broodstock beds if propagation is needed in the future.  Survey efforts are expected to begin later this year and continue through 2022.