Q:  What action is the U.S. Fish and Wildlife Service taking?

A:  The U.S. Fish and Wildlife Service is proposing to designate critical habitat for four imperiled plants that only grow in South Florida, specifically in Monroe, Collier, and Miami-Dade Counties, Florida. The four plants are:  Florida pineland crabgrass, pineland sandmat, Florida prairie-clover, and Everglades bully. These four plants received federal protection under the Endangered Species Act on October 6, 2017.

Q:  What is Florida pineland crabgrass? 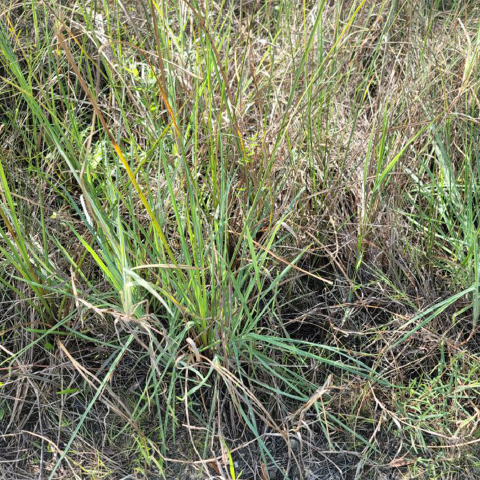 A:  Florida pineland crabgrass is a federally threatened species of clump-grass. It is a small perennial also known by the common names twospike crabgrass, Everglades grass, few-flowered fingergrass, and particular grass. It is blue-green to gray with reddish-brown stems. The leaves form a subtle zigzag pattern as the leaf blades come off the stem at an angle. The flowers are dull green, very small, and borne on wispy spikes on the ends of the leafy stems, with usually only a few flower clusters forming per clump of grass. Stolons (aboveground horizontal stems) are not present; however, inflorescence branches have been known to produce roots infrequently at their nodes, and these have been observed producing new ramets (belowground horizontal stems) that allow for vegetative spread. Florida pineland crabgrass is known to reproduce sexually, with fruit production in the fall. This grass is endemic to Florida where it is found only in Everglades National Park's Long Pine Key and Big Cypress National Preserve in Miami-Dade County. It grows in pine rocklands and marl prairies, as well as the ecotone between these habitats.

Q:  What is pineland sandmat? 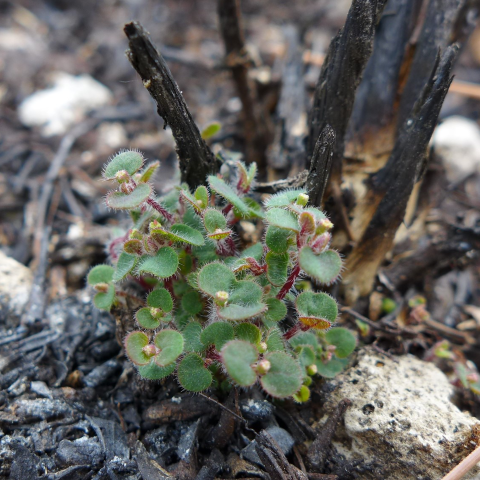 A:  Pineland sandmat is a federally threatened herb. It is an ascending to erect perennial herb that is also known as pineland deltoid spurge, rockland spurge, and wedge sandmat. The stems are hairy and often reddish. The leaf blades range from kidney-shaped or triangle-shaped and elliptic to oval. The fruit is a 2-mm broad, fuzzy capsule. The seeds are 1 mm long, transversely wrinkled, and yellowish in color. It reproduces sexually and has green blooms. Fruit production is year-round, with a peak in the fall. Pineland sandmat grows on pine rocklands with calcareous soils. It is endemic on the Miami Rock Ridge in Miami-Dade County, Florida.

Q:  What is Florida prairie-clover? 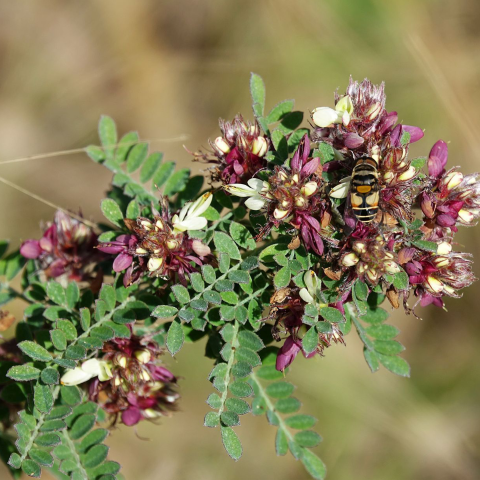 A:  Florida prairie-clover is a federally endangered shrub. It is a short-lived (less than 7 years) perennial that can grow between 3-10 feet tall with a light-brown woody stem and non-woody, light-brown or reddish branches. The leaves are composed of 9–15 oval leaflets. The flowers are in small loose heads at ends of hairy, glandular stalks, less than 0.4 inches long. The flower color is white and maroon; each of the petals is different lengths and shapes. The fruit is a small one-seeded pod, mostly enclosed by the hairy, gland-dotted calyx (bracts at base of each flower). Florida prairie-clover shows the most adaptability of all four plants, occurring in communities classified as pine rockland, mark prairie, rockland hammock, and coastal berm, in addition to disturbed sites adjacent to these habitats, such as roadsides and mowed areas still dominated by native species.

Q:  What is Everglades bully? 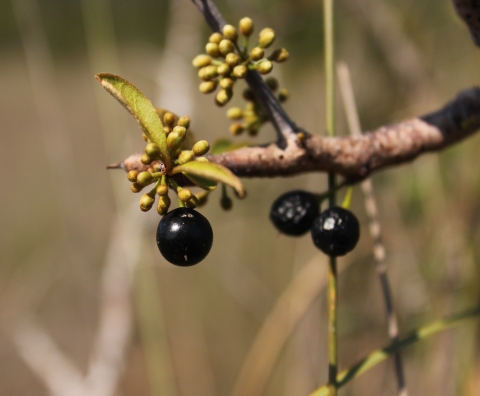 A:  Everglades bully is a federally threatened shrub. It grows between 3–6 feet tall and has branches that are smooth, slightly bent, and somewhat spiny. The leaves are thin, oval-shaped, long, evergreen, lance-shaped, and fuzzy on their undersides. The flowers are in axillary cymes (flat-topped inflorescences). Everglades bully is distinguished from the similar subspecies S. reclinatum ssp. reclinatum in Florida by its leaves, which are fuzzy on their undersides, rather than smooth or fuzzy only along the leaf midvein. Everglades bully grows in pine rocklands and marl prairies, as well as the ecotone between these habitats.

Q:  What do all four plants have in common?

A:  All of these plants are habitat specialists that grow under direct sunlight and in association with other native plants. For these plants to thrive, specific environmental conditions must be present to provide anchoring, nutrients, suitable moisture levels and suitable soil chemistry. All four plants primarily occur in Everglades National Park and Big Cypress National Preserve, with smaller areas of occurrence in Miami-Dade County on private and county land.

Q:  What are the threats to the four Everglades plants?

A:  The primary threats to these species are habitat loss, fragmentation, and degradation resulting from urban and agricultural development. Additional threats to these species are lack of adequate fire management, sea level rise, maintenance practices used on disturbed sites, and competition with nonnative species. These endemic species exhibit a high degree of isolation and are therefore susceptible to extinction from both random and nonrandom catastrophic natural or human-caused events.

Q:  What is critical habitat?

A:  The ESA defines critical habitat as the specific geographic areas that contain features essential to the conservation of an endangered or threatened species that may require special management and protection. Critical habitat may also include areas that are not currently occupied by the species but will be needed for its recovery. Establishing critical habitat will raise awareness of the needs of these plants and focus the efforts of our conservation partners. It also alerts federal agencies that they are required to make special conservation efforts when they work, fund, or permit activities in those areas.

Q:  Does critical habitat designation affect all activities that occur within the designated area?

A:  No. Critical habitat designation does not necessarily restrict activities, but federal agencies must make special efforts to protect the important characteristics of these areas. Only activities that involve a federal permit, license, or funding, and are likely to destroy or adversely modify critical habitat will be affected. If this is the case, the Service will work with the agency and, where appropriate, private or other landowners, to amend their project to allow it to proceed without adversely modifying the critical habitat. Thus, most federal projects are likely to go forward, but some will be modified to minimize harm to critical habitat.

Q:  How does the Service determine what areas to designate as critical habitat?

A:  Biologists considered physical and biological features the species needs for survival and reproduction. These include:

Q:  What is the proposed critical habitat for Florida pineland crabgrass?

A:  Two critical habitat units are proposed for Florida pineland crabgrass. They are:

Q:  What is the proposed critical habitat for pineland sandmat?

A:  Three critical habitat units are proposed for pineland sandmat. They are:

Q:  What is the proposed critical habitat for Florida prairie-clover?

A:  Four critical habitat units are proposed for Florida prairie-clover. They are:

Q:  What is the proposed critical habitat for Everglades bully?

A:  Five critical habitat units are proposed for Everglades bully. They are:

Q:  What is the draft economic analysis that was done for this proposed action?

A:  Draft economic analyses (DEA) are created to analyze the economic impacts of a proposed critical habitat designation. The DEA for the four Everglades plants found that the economic cost of implementing the rule will be $43,600 annually, and likely be limited to additional administrative effort in considering adverse modification of the plants’ habitat during Section 7 consultations.

Q:  Which other threatened or endangered species are found on the lands being proposed for critical habitat for the four Florida Keys plants?

Q:  Are the lands being proposed for critical habitat designation occupied by the four Everglades plants?

Q:  What can the public do to conserve native plants?

A:  The U.S. Fish and Wildlife Service offers some programs to protect and expand the population of threatened and endangered plants. The Fairchild Tropical Botanical Garden in Florida also offers the Connect to Protect Network, a citizen science program that enlists South Florida residents to plant native plants in order to connect the few remaining isolated fragments of pine rockland. This helps pollinators to move between habitat fragments and helps native plants reproduce.

Q:  How do I submit comments on this proposal?

A:  For directions on how to submit comments, visit the Federal eRulemaking Portal at http://www.regulations.gov. In the Search box, enter FWS-R4-ES-2022-0125, which is the docket number for this rulemaking. Comments must be received by December 13, 2022. We must receive requests for a public hearing, in writing, at the address shown below by November 28, 2022.