Image Details
Lake Ophelia NWR was once part of a large contiguous Mississippi River bottomland hardwood forest. The Refuge was established in 2000 with the purpose of conserving and restoring habitat for migratory birds, aquatic resources, and endangered plants and animals.
Hunting and Fishing Permits and Regulations

All Special Recreational Activity Permits and lottery hunt applications can be obtained through the RecAccess website.  You can access the 2021-22 Hunting and Fishing Regulations online or in person at the Refuge. 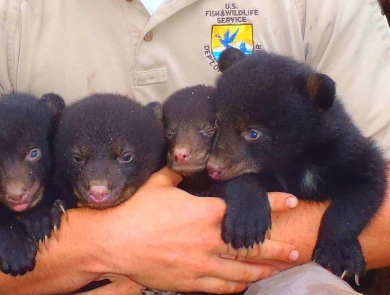 History and Culture
Theodore Roosevelt & the Teddy Bear
Theodore Roosevelt National Wildlife Refuge Complex (located in Mississippi and Louisiana) and Tensas River National Wildlife Refuge (in Louisiana) are steeped in history and folklore. They conserve wildlife, and they honor the legacy of the 26th president of the United States and the founder of...
Apr 11, 2022
View All News

Lake Ophelia NWR provides numerous recreation opportunities to thousands of visitors every year. People enjoy viewing the unique geology and diverse wildlife.  Hiking is allowed in all areas open to the public and wildlife observation and photography are encouraged.

Lake Ophelia NWR was once part of a large contiguous Mississippi River bottomland hardwood forest. During the 1970's, much of the area that would become Lake Ophelia NWR was cleared for agriculture.  Today, the Refuge consists of 17,500 acres characterized by ridges and swales that create a great diversity of plant and animal communities. The refuge is named for Lake Ophelia, a 350-acre permanently flooded lake.

Refuge staff use a variety of tools to manage wildlife populations and habitat on Lake Ophelia NWR while maintaining opportunities for the public to participate in recreational activities like hunting and fishing.