Winter – At Everglades Headwaters National Wildlife Refuge the average low temperature in winter is 52 degrees which means it never gets very cold. Fewer insects and reptiles are out and about but plenty of birds and other wildlife take advantage of the cooler temperatures and the occasional rain storms bring much needed water to the naturally dry landscape.

Spring – Spring is the time of year where you have the most activity at Everglades Headwaters National Wildlife Refuge. Many species of birds appear as they begin their spring migrations, mating and creating families along with a number of other fauna and flora. As temperatures begin to warm up, flowers bloom and snakes and gopher tortoises will move around more frequently. 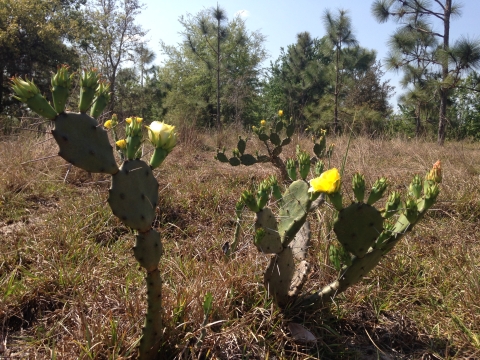 Summer – The frequency of rain showers is unpredictable in summer and it gets HOT! Most of our resident birds and other critters are doing their best to stay in the shade. Hurricanes and high temperatures can bring fire and destruction to the Refuge.

Fall – Fall means the peak of hurricane season. Each year hurricane season begins on June 1st and lasts 5 months, with storms typically peaking in August and September, though as an interior Refuge, Everglades Headwaters National Wildlife Refuge is often protected. As temperatures slowly cool down, insects become less obvious and our cold blooded friends might spend more time sunning themselves in the naturally open areas.

The refuge was created to safeguard and enhance one of the last remaining grassland and longleaf pine savanna landscapes in eastern North America and to protect imperiled species including over 10 federally listed species that make their homes in the pine flatwood, xeric oak scrub, freshwater marsh, and wet prairie habitats that can be found in the Everglades Headwaters National Wildlife Refuge.