The Deschutes Basin HCP was finalized and approved by the US Fish and Wildlife Service on December 31, 2020. (National Marine Fisheries Service approval is anticipated in 2021.)

After over a decade of development that included input from Tribes, agencies, stakeholders, and the public, we are excited to now be collectively be implementing the HCP.

The Deschutes River Basin HCP is a large-scale, collaborative plan that helps the City of Prineville and the Irrigation District members of the Deschutes Basin Board of Control meet their current and future water needs while enhancing fish and wildlife habitat. The HCP covers approximately 10,500 square miles of land in central Oregon. Bounded by the Cascades Mountains on the west, the Ochoco Mountains on the east, and the Columbia River to the north, the Deschutes River Basin includes six major tributaries above Lake Billy Chinook.

The HCP delivers predictability to water managers by providing certainty on a water storage, release, diversion, and return paradigm for the next 30 years in the Deschutes Basin. It accomplishes this goal through a combination of adjusted water management practices, increased funding for conservation projects and in-stream leasing programs, more gradual ramping up and down of the irrigation season releases, support for on-farm water conservation, maintenance of fish screens, and related items — all to better align the water management operations with the life-history needs of covered species. 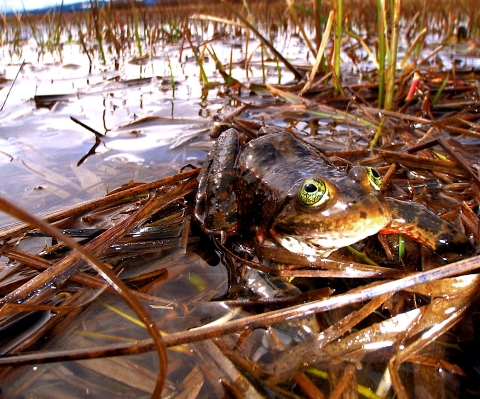 The HCP was part of an application for an Endangered Species Act incidental take permit (ITP) that authorizes incidental take of listed species caused by covered activities. The applicants for the ITP included the City of Prineville and members of the Deschutes Basin Board of Control (i.e., Arnold, Central Oregon, North Unit, Ochoco, Swalley, Three Sisters, Tumalo, and Lone Pine Irrigation Districts in Oregon). The National Marine Fisheries Service (NMFS) was a cooperating agency in the process.

Conservation measures in the HCP are designed to minimize and mitigate impacts caused by the incidental take of covered listed species that may result from the storage, release, diversion and return of irrigation water by the Districts and the City of Prineville.

The aquatic species covered by the U.S. Fish and Wildlife Service in this HCP include the Oregon spotted frog and bull trout - both federally listed as threatened.