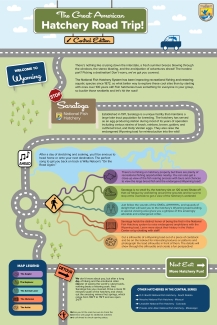 Established in 1911, Saratoga is a unique facility that maintains a large lake trout population for breeding. The hatchery has served as an egg-producing station during most of its years of operation including various strains of brook, rainbow, brown, golden, and cutthroat trout, and Dolly Varden eggs. They also raise the endangered Wyoming toad for reintroduction into the wild!