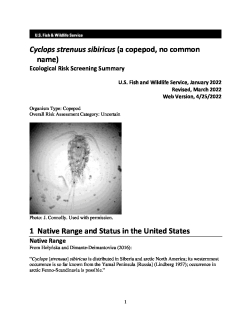 Cyclops strenuus sibiricus is a copepod native to parts of Russia, Siberia, Japan, and arctic North America. There is significant taxonomic confusion in the scientific literature around species and subspecies in the genus Cyclops. This report follows the taxonomic authorities chosen for the ERSS process in referring to this copepod as C. s. sibiricus, but several recent literature sources refer to it as Cyclops sibiricus. C. s. sibiricus has been introduced outside of its native range into the St. Marys River in the Great Lakes region of the United States, where it was collected in both the 1970s and 1990s. There is no information in regard to the impacts that this introduction has had, and therefore the history of invasiveness is classified as Data Deficient. The overall climate match for the contiguous United States was High with a majority of States having a high individual Climate 6 score and the highest match being found around the Great Lakes. However, the certainty in the interpretation of the results of the climate match is lowered because of the large native range and lack of source points for the climate match. The certainty of assessment is Low because of the taxonomic confusion associated with this species and the general lack of information available. The overall risk assessment category for Cyclops strenuus sibiricus is Uncertain.

Injurious Wildlife Listings - Keeping Risky Wildlife Species Out of the United States
Preventing the introduction of new harmful species is the only way to fully avoid impacts of injurious species on local, regional, and national economies and infrastructure, and on the natural resources of the United States.
Program
Subject tags
Invasive species
Freshwater fish
Crustacea