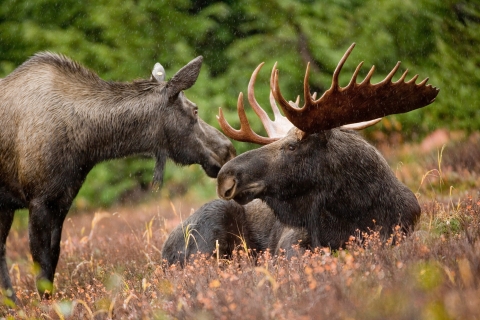 Moose are the world's largest members of the deer family and are most abundant in recently burned areas that contain willow and birch shrubs, on timberline plateaus, and along the major rivers of Southcentral and Interior Alaska. During fall and winter, moose consume large quantities of willow, birch, and aspen twigs. In the spring, moose eat a variety of foods, particularly sedges, equisetum (horsetail), pond weeds, and grasses. During summer, moose feed on vegetation in shallow ponds, forbs, and the leaves of birch, willow, and aspen.

Moose are long-legged and heavy bodied with a "bell" or dewlap under the chin; only the bulls have antlers. Their color ranges from golden brown to almost black, depending upon the season and the age of the animal. The hair of newborn calves is generally red-brown fading to a lighter rust color within a few weeks. 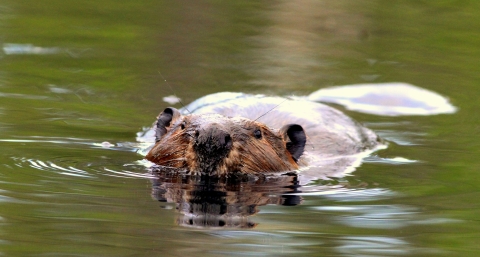 The beaver is the largest of the North American rodents. They have thick brown hair with long guard hairs. Their bodies are robust with a broad, flat, and scaly tail that is usually around 10 inches long and 6 inches wide. They slap their tails against the water as a sign of warning. Beavers reach 3 to 4 feet in length and weigh between 40 and 70 pounds. They are sometimes mistaken for Muskrats, but their larger size and flat tail are good indicators.

Beavers need two to three feet of ice-free water year round. To maintain the necessary water level, beavers construct dams. Piled logs and trees are secured with mud, plants, rocks and sticks. They also build canals to float and transport branches and logs for food and construction. Food for the winter is stored in underwater food caches; beavers eat bark, leaves, aquatic plants, roots and grasses. There are two types of dens beavers use as food caches depending on water fluctuations: bank dens and lodges. Lodges are constructed where water levels are more stable, as in ponds or lakes. The same lodge is used by a family year after year and may house up to ten beavers at a time. The main room of the lodge is often more than 3 feet tall and 4 to 5 feet wide.

Breeding usually occurs in January or February and the young are born April to June with litters averaging one to six kits. The kits eyes are open at birth and they can swim immediately. Young stay with their parents until they are two years old and then go out to find their own homes.

Some of the highest concentrations of beaver in the Upper Tanana Valley occur in the Scottie and Moose Creek areas. 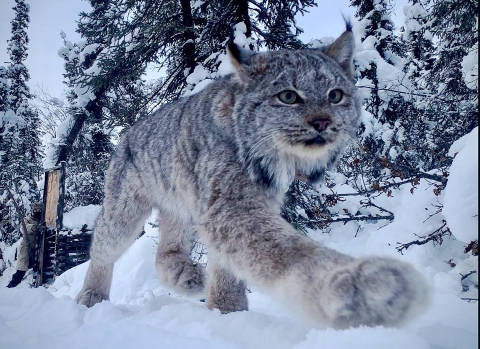 Lynx are Alaska’s wild cats with long, tufted ears, long legs, and exceptionally large feet that enable them to move easily in deep snow. Their coats are gray, streaked with black on their neck ruff, forehead, back, and legs. They also have a short tail with a unique black circle around its tip. Lynx usually weigh 13 to 30 pounds and stand 24 to 28 inches at the shoulder.

Lynx prey mainly on snowshoe hares. The lynx’s survival is tightly intermixed with that of the hare and, as a result, lynx populations follow the hare’s roughly 10-year cycle of abundance and decline. Lynx will also supplement their diet occasionally with caribou, fox, and birds.

Lynx are mostly solitary and nocturnal. Breeding occurs March through April with kittens born in May or June. The litter size averages two to four kittens born in a natural den such as a tree hollow or beneath roots.

The refuge is host to both resident and seasonally present wildlife including 42 species of mammals, 15 fish species, one amphibian, 160 migratory and 30 resident bird species and a large but unknown number of invertebrate species.