Bull trout were listed as threatened under the ESA in 1998 due to declining populations. The USFWS recommends monitoring populations in subbasins where little is known about the populations, including the Grande Ronde and Imnaha Subbasins. Redd counts have been conducted for over 20 years in the Wallowa Mountains of NE Oregon and is important for determining relative abundance and distribution trends in bull trout populations. Surveys are conducted in selected streams within the Lostine River, Bear Creek, and Big Sheep Creeks and the Imnaha River within the Imnaha Subbasins.

Objectives of the bull trout surveys include:

This project is part of a larger effort in NE Oregon and SE Washington that is occurring at the same time (September - October). Bull trout spawning surveys have been conducted on similar index areas for selected Grande Ronde and Imnaha River streams for over 20 years. Surveyors walk the rivers through the selected “index areas” to locate, measure and record the number of bull trout redds. Index areas in this Project refer to known bull trout spawning reaches that have been surveyed in the same consistent locations on an annual basis for over 20 years. 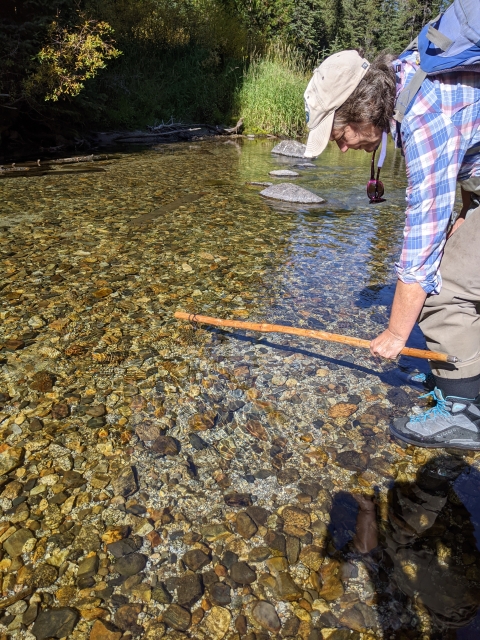 Bull trout spawning areas were documented for the surveyed streams for 20 plus years. Redd size is related to fish size, smaller redds such as in Cliff Creek and the Little Minam River are made by smaller (resident) fish and larger redds such as in S.F. Imnaha are made by larger (fluvial) fish.  Brook trout have been observed on the spawning areas of the Lostine and are known to inhabit Bear Creek.

In 2020, most surveyed streams, redd counts were average to slightly below average compared to previous years. The Nez Perce Tribe for the USFWS plans to continue long-term population monitoring via redd counts in priority streams in the future, though some surveys will not be conducted on an annual basis but rather on an interval schedule (e.g., 5-10 year intervals). In 2020, the tribe started collecting eDNA samples to fill information gaps on distribution and presence/absence of bull trout and brook trout in the Bear/Goat Creek watershed where hybridization is a primary threat. In the future, we (the USFWS, Nez Perce Tribe, and partners) will continue to use additional monitoring strategies like eDNA sampling, electrofishing, and/or snorkeling to monitor bull trout populations.

The local bull trout populations are relatively stable within the survey period. The Imnaha population is one of the strongholds within the Imnaha Subbasin and within the Wallowa Mountains. Primary spawning activity on the Imnaha River occurs in the headwaters which lie within the wilderness.  Both fluvial and resident life history forms are present. The Imnaha River bull trout are documented to be at low risk of extinction and the Big Sheep bull trout are “of special concern.” The results of this study are consistent with this past assessment. The Lostine River is considered a moderately-strong population within the Grande Ronde Subbasin. The Lostine River and Bear Creeks contain brook trout and hybridization may be occurring. Future genetic analysis of bull trout and brook trout is recommended to help determine the significance of this threat.

The Wenaha system is known to contain a healthy bull trout population. Previous to 2018, there has been limited spawning data collected on the Wenaha, due to its remoteness. In 2018, the Wenaha surveys documented 294 redds in 22.4 total miles surveyed, or 13.1 redds/mile. The Minam River is another remote tributary stream within the Grande Ronde system, where there has been limited bull trout data collection. In 2018, Minam surveys documented 41 redds for 6.9 miles of survey, or 5.9 redds per mile.

We acknowledge the 20-year effort put forth by the U.S. Fish and Wildlife Service (USFWS) and the United States Forest Service (USFS) and many partners to conduct bull trout spawning ground surveys in the Wallowa Mountains of Northeast Oregon. In 2019, the Nez Perce Tribe took on the role of coordinating some of these surveys and building on that long-term data set. This project would not have been possible without the dedication, hard work, funding, and assistance provided by all partners. Partners for this Project included the Nez Perce Tribe (NPT), Oregon Department of Fish and Wildlife (ODFW), USFS, Oregon Watershed Enhancement Board (OWEB), Grande Ronde Model Watershed (GRMW), the USFWS, Anderson Perry, Inc., Wallowa Resources, several fisheries consultants, volunteers, Freshwater Trust, and private landowners on the Lostine River.

This report summarizes bull trout redd counts from surveys conducted in the Grande Ronde River and Imnaha River subbasins in 2020 and compares those with prior years. Streams surveyed in 2020 included: Lostine River, Little Minam River, Dobbin Creek, Big Sheep Creek, and Lick Creek. In most...

Bull trout were listed as threatened under the Endangered Species Act in 1998 due to declining populations. The U. S. Fish and Wildlife Service (Service) recommends monitoring bull trout in subbasins where little is known about the populations, including the Grande Ronde and Imnaha subbasins....

Bull trout were listed as threatened under the Endangered Species Act in 1998 due to declining populations. The U. S. Fish and Wildlife Service (Service) recommends monitoring bull trout in subbasins where little is known about the populations, including the Grande Ronde and Imnaha subbasins....

Bull trout were listed as threatened under the Endangered Species Act in 1998 due to declining populations. The U. S. Fish and Wildlife Service (Service) recommends monitoring populations in subbasins where little is known, including the Grande Ronde and Imnaha subbasins. Spawning survey data is...