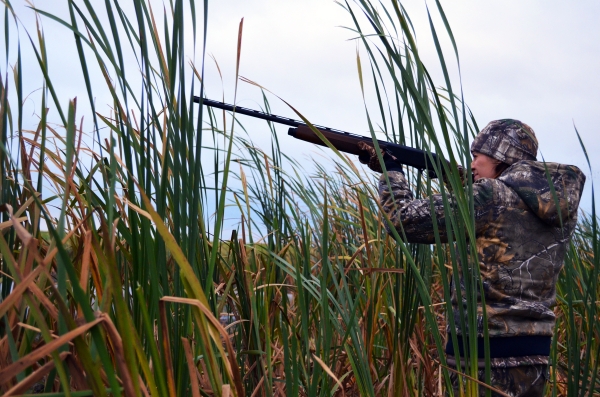 The 33,000-acre Horicon Marsh is divided into Horicon National Wildlife Refuge (U.S. Fish and Wildlife Service) and Horicon Marsh State Wildlife Area (Wisconsin Department of Natural Resources). Known as the largest freshwater cattail marsh in the United States, it provides rich habitat for a variety of birds and wildlife. Here you can witness one of the greatest wildlife spectacles in the Upper Midwest that takes place every fall – the migration of thousands of geese, ducks and other waterfowl species. The two areas have different hunting regulations and season dates. Horicon National Wildlife Refuge, the northern two-thirds of Horicon Marsh, is a refuge for migrating birds. No waterfowl hunting is permitted other than an annual mentored youth duck hunt and state woodcock season. Opportunities are available for waterfowl hunting on the southern one-third of the Horicon Marsh, which is managed by the Wisconsin Department of Natural Resources, and on private lands surrounding the marsh. The refuge is open for hunting of deer, turkey, bear, small game and upland birds.

A Learn to Hunt Waterfowl Program is offered each fall at Horicon Marsh. Thirty novice hunters from ages 10-adult have the unique opportunity to experience a mentored hunt at Horicon Marsh on the Horicon National Wildlife Refuge. The application may be obtained by emailing horicon@fws.gov or calling 920-387-6514. Applications are available by July 1.

Archery and Gun Deer Hunts for Hunters with Disabilities

These refuge sponsored deer hunts require a special use permit for the refuge in addition to the appropriate state issued license and carcass tags issued through the Wisconsin Department of Natural Resources (Class A, B, C or D hunter disability). For more information or to receive a refuge application, contact the refuge at horicon@fws.gov or 920-387-2658 extension 200. Applications are available by August 1.