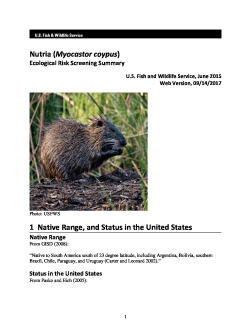 M. coypus is a semi-aquatic mammal native to South America that has been transported around the globe because its value as a fur-bearer. In North America, established populations are currently concentrated in the Pacific Northwest, the Southeast, and the Mid-Atlantic regions. However, nearly all of the contiguous U.S. is a high climate match for M. coypus, indicating potential for the species to become established in new locations. The impacts of introduced M. coypus are felt by both plants and animals. M. coypus has caused extensive damage to wetland vegetation in the southern U.S. It has been observed to destroy waterbird nests and its feeding habits reduce availability of food and reproductive hosts for endangered species in Japan. The overall risk of this species is high.