Picture this; you have just flown over 3,000 miles from Anchorage, Alaska, to Washington, DC. It’s two o’clock in the morning, and you wait an hour for a taxi from the airport to a hotel. Then, finally, you muster up enough energy to drag yourself to your room and try to get some rest before leaving at seven o’clock.

You are jet-lagged and exhausted when you wake up, but the excitement and nerves keep you going. You hop in your new patrol truck and drive five hours to a small town in western Pennsylvania (PA), where the events of the upcoming weeks will forever change your way of life.

For some, this may sound miserable, but for most Federal Wildlife Officers, this is just another day. For me, one part was miserable as I am weary of large commercial flights, but I knew it would all be worth it as I was on my way to becoming a Federal Wildlife Canine Officer.

I first became interested in working with canines when I was deployed in Afghanistan in 2012-2013. One of my friends was a handler for a dog named Eddy, an explosives detection canine. Watching them work together and seeing the bond they built was something special. Eddy was respected and treated as one of us (Eddy held the rank of sergeant). On dismounted patrols, our lives were in his “nose,” so to speak.

After my time in the Army and completing college, the U.S. Fish and Wildlife Service hired me. I found out the Service has service canine teams while I was going through the hiring process. I became aware of all the great work the teams have done in solving a multitude of wildlife and natural resource cases. I remember thinking that was going to be me one day!

Fast forward to June 2022, and there I was, driving the backcountry roads of western PA in my new canine patrol truck on my way to begin training. Many of you may know what it is like in western PA in June, but for those that do not, think mid 90's and 70 percent humidity. So yeah, leaving the comfortable 50-degree weather in Alaska and entering the sauna that was western PA was rough, to say the least.

I would have to acclimate quickly as training started on day one, and the hammer remained down for six weeks. Day one consisted of administrative paperwork and classroom time (also known as "death by PowerPoint"). I was sitting there chomping at the bit, ready to jump into this new world of canine handling. I just wanted to meet my new partner, which would have to wait.

Day two, the day my life changed forever. June 21st, 2022 was the day I would come face to face with destiny.

I pulled my truck into the parking lot at Shallow Creek Kennels. The other officers attending the six-week basic canine handler’s course had amassed outside the training room. I had a belly full of butterflies, and my mind set on making the best of each day.

I had an eagerness to meet my new partner that I would have to tame until the end of the day. Finally, after a grueling day of dry runs with no canines, our lead instructor gathered us and asked who was ready to meet their partners. My soul just about left my body with excitement.

All the stress and exhaustion from the day seemed to drift away on the slight breeze that was present. It was replaced with an overwhelming feeling of joy and satisfaction.

This was it; the time was upon us, and all I could think about was whether the dog would like me or not. We all lined up next to the fence, and one by one, each officer went to the kennel and retrieved our partners.

I stood in line as officers and their new partners passed by and went for their first walks together. Finally, I heard an instructor shout, "Iro's daddy." I had to stop myself from sprinting as I started moving to the back of the kennel.

Around the back, I went to the second kennel, where an instructor was waiting for me. The instructor was standing next to one side of the kennel door; on the other side was a one-and-a-half-year-old Belgian Malinois.

He had a black face with a white patch on the front of his chest. The rest of his coat was a fawn color with black fur on his feet. The instructor said, “this is Iro, open the door and take your partner for a walk.”

I slowly opened the door and attached my four-foot lead to his leather collar. Together Iro and I exited the kennel and began our first walk. As we made our way onto the 30-acre field, I told Iro, “it was nice to meet him, and my name is Pete.” I continued to say, “you and I are going to make a great team, and I am looking forward to working with you.”

Our first walk seemed to go by so fast, and before I knew it, I was putting him back in his kennel. Before leaving, I told him, “I will see you tomorrow.”

Over the six-week course, Iro and I certified together as a Resource Protection Team. This means he can detect illegally taken wildlife (currently certified in caribou, moose, brown bear, and black bear), locate evidence of illegal activity/articles dropped by individuals (casings, knives, bullet fragments, etc.), track for missing persons and help apprehend dangerous and violent offenders. The course was rigorous and draining at times, but in the end, I had the experience of a lifetime and loved every second of it.

I changed Iro’s name to Togo on the last day of class. For those who do not know the story of Togo, here is a brief synopsis.

In 1925 in the city of Nome, AK, a diphtheria outbreak threatened the lives of thousands living there. The townspeople decided to have sled teams go to Nenana and link up with a train headed south from Fairbanks that carried the medicine to treat the outbreak. This fateful trip would be known as the Serum Run.

Teams were staged along the route to hand off the medicine along the way. Togo was the lead dog for his owner, musher Leo Seppala’s team. Together they traversed approximately 260 miles of Alaskan wilderness (almost triple what other mushers did) and survived multiple near-death experiences.

Togo and Seppala made it approximately 70 miles outside of Nome, where they handed off the medicine to musher Gunnar Kaasen and Balto. Finishing the last 70 miles of the 260-mile trip, Balto gets a lot of the credit for the Serum Run, but Togo and Seppala carried the lifesaving medicine further than any team. They are the unsung heroes!

After I got to know Togo, it was a no-brainer that this would be his name. He is strong-willed, determined, loyal, courageous, patient, and intelligent. Just like Togo from the serum run and Alaskans in general!

Pete Harvey is a Federal Wildlife Canine Officer. "Where we go. They go!" FWC Togo and FWCO Harvey look forward to being involved in our community not only here locally on the Kenai Peninsula but throughout the state and country! Find out more about Kenai National Wildlife Refuge, browse our Kenai Refuge Notebook and follow us on Facebook!

In Alaska we are shared stewards of world renowned natural resources and our nation’s last true wild places. Our hope is that each generation has the opportunity to live with, live from, discover and enjoy the wildness of this awe-inspiring land and the people who love and depend on it. We honor, thank, and celebrate the whole community — individuals, Tribes, States, sister agencies, fish enthusiasts, scientists, and others — who have elevated our understanding and love, as people and professionals, of all the fish. 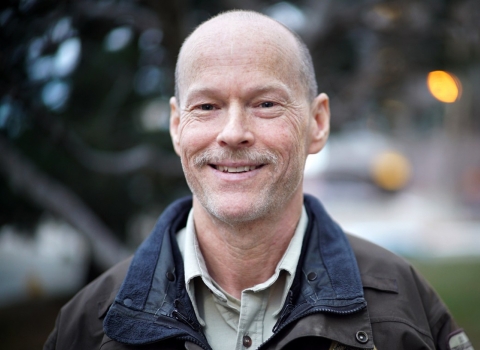 Our People
Reflections on a Career in Conservation Law Enforcement