When scientists proposed moving endangered winter-run Chinook salmon into historical habitat upstream of Shasta Dam this summer, they expected some people would doubt the seemingly new idea could work. But it wasn’t a new idea at all, and it had been proven long ago.

“When talking about returning salmon to historical habitats above high-head dams, it's not uncommon to hear claims that it's too difficult,” said Stacie Fejtek Smith, fisheries biologist for National Oceanic and Atmospheric Administration Fisheries. “And that is fundamentally untrue. The traditional knowledge shows us that fish can be moved and that people have been doing it since time immemorial.”

As an urgent response to a third straight year of drought, NOAA Fisheries and its partners — the U.S. Fish and Wildlife Service, the California Department of Fish and Wildlife (CDFW) and the Winnemem Wintu Tribe of Northern California — proposed moving winter-run Chinook to the McCloud River, where the fish historically spawned until Shasta Dam cut them off from their habitat in the 1940s. The Winnemem Wintu, who are also known as the Middle Water People of the McCloud River, have a centuries-long history of transporting salmon past barriers.

“Before dams like this existed, the Winnemem Wintu people would bring these fish with them in baskets above barriers or waterfalls, so they would have that food source,” Smith said. “They have been doing fish introductions for many centuries and are the caregivers to these fish.”

The caregivers would even light fires alongside the river, to mimic stars in an effort to guide fish upstream. Over the centuries, they passed down valuable knowledge about fish introductions, the overall landscape, the mudflows in the McCloud River and the ways salmon benefit the entire ecosystem.

In a sacred riverside ceremony July 11, Winnemem Wintu Chief and Spiritual Leader Caleen Sisk led a group in song, dance and prayer for salmon eggs that had been brought to the McCloud River from the U.S. Fish and Wildlife Service’s Livingston Stone National Fish Hatchery.

On July 11 and again Aug. 8, biologists transported about 20,000 winter-run Chinook eggs from Livingston Stone National Fish Hatchery to the Shasta-Trinity National Forest’s Ah-Di-Na Campground. A rotating team of CDFW staff has been at the campground around-the-clock ever since, monitoring the eggs’ condition every few hours.

There, on the banks of the McCloud River, the first 20,000 eggs were placed in the tank of a remote site incubator, which held the eggs on a screen in circulating river water. When they hatched, the resulting alevins — newborn salmon — would fall through the screen onto a gravel section of the tank, where they would stay for about a month before swimming through a pipe into the river.

Unfortunately, only four days after the eggs were placed in the incubator, water melting off a Mount Shasta glacier inundated the river with mud, which can suffocate developing eggs. The on-site team continually cleared sediment from the tank and removed any dead eggs to prevent the spread of fungus. But the sediment, particularly in the lower chamber, presented a problem.

“A remote site incubator is a proven tool to incubate eggs, but when we had such high siltation in the water, it became quite clear it wasn’t the best tool for the job,” said Matt Johnson, senior environmental scientist for CDFW. “We're rapidly responding on a daily timestep to changing conditions in the river. We were aware of Mud Creek’s history and its effect on water clarity in the lower McCloud River, but were unprepared for how much siltation would occur in the remote site incubator and the jeopardy the eggs would be in due to the heavy sediment load.”

The agencies had planned ahead for a possible mudflow event and adapted quickly by setting up a system of incubation trays from CDFW’s Mount Shasta Fish Hatchery, to use alongside components of the remote site incubator. Each incubation tray maintains a shallow pool of circulating river water, which can be periodically drained of sediment.

The new system also made eggs and alevins much easier to see and reach. Staff can now easily identify and remove dead eggs, and they can agitate the water around live eggs with air or a feather to waft sediment off of them. Eggs can also be temporarily removed from a tray to clean it.

Once the alevins develop into fry in the trays, they will be released into a quiet alcove of the river. The fry will then swim downstream about 20 miles toward rotary screw traps set up by CDFW in consultation with the Winnemem Wintu. The large, floating, conical traps will collect the fry, which will be loaded into coolers and driven to a release site in the Sacramento River downstream of Shasta Dam. From there, the salmon will continue their journey to the ocean.

“The trapped fish will give us life history information on what these juveniles do in the McCloud River, such as when they will be entering Shasta Lake,” Johnson said. “This will inform future operation of a more permanent juvenile salmon collection system, which is on a parallel track for implementation with the McCloud River salmon reintroduction project.”

State, federal and tribal plans call for re-establishing winter-run Chinook populations in historical, cold-water habitats upstream of dams. This year’s transfer of salmon to the McCloud River will contribute valuable information toward that long-term effort, but it was not planned for that purpose.

The McCloud River project is one of several actions the agencies quickly collaborated to plan this spring to help stave off the species’ extinction in the face of ongoing drought and rising water temperatures.

“Winter-run Chinook salmon are one of the most endangered salmon species in the nation, and one of the nine endangered species highlighted by NOAA nationwide,” Smith said. “This year we anticipated seeing a very high mortality rate because of the back-to-back drought years, and these actions were pulled together to prevent the species from inching closer to extinction.”

Livingston Stone National Fish Hatchery significantly increased its winter-run Chinook salmon production as part of this effort, which will help maintain genetic diversity through the drought years. The hatchery typically collects 180 adult salmon from the Sacramento River each year to raise about 250,000 juvenile fish. This year the hatchery and interagency partners increased the collection limit and gathered 463 fish, which raised potential production to as many as 900,000 juveniles.

“This is an all-hands-on-deck situation,” Smith said. “This is an urgent emergency action, and it has relied on strong collaborations and the will of our partners to make it happen.”

Part of the ecosystem

Throughout the planning and execution of this project, Winnemem Wintu members shared valuable information gathered over centuries. NOAA Fisheries’ Zayleen Kalalo spoke in depth with tribal members to document their traditional ecological knowledge and history of fish-moving efforts.

Perhaps most impactful to state and federal scientists, though, was the tribe’s connection with the land and its natural resources.

“As conservationists, we are part of the ecosystem that we are caring for,” said Taylor Lipscomb, hatchery manager for Livingston Stone. “We can become so focused on the scientific aspects of conservation, we can overlook that we are a part of the landscape as well as stewards of it. By the same token, the resources we are protecting are part of us too.”

Lipscomb is Salish and grew up on the Flathead Reservation in western Montana. There, he and his Native American community participated in ceremonies to honor and celebrate the life-bringing aspects of the Flathead River and its life-giving contents, as well as other parts of the natural environment.

“Taking some time and pausing to recognize the significance of these events, like what happened at Ah-Di-Na on July 11, needs to be a part of the equation,” he said.

Lipscomb’s federal and state peers similarly felt the day’s significance and were impacted by its events.

“Getting a glimpse into Winnemem Wintu culture was very powerful and moving,” Johnson said. “I feel honored that I got to be a part of this ceremony and see how they continue their traditions.”

As part of the July 11 ceremony, the Winnemem Wintu invited the federal and state representatives on hand to receive a tribal blessing and share their thoughts. Several scientists spokeemotionally about returning an endangered species to habitat it hadn’t swum in decades.

“This is what people get into conservation work for,” Lipscomb said. “To see something like this come to fruition — to put heads together, work hard and work through barriers to bring about conservation change — is super-rewarding.” 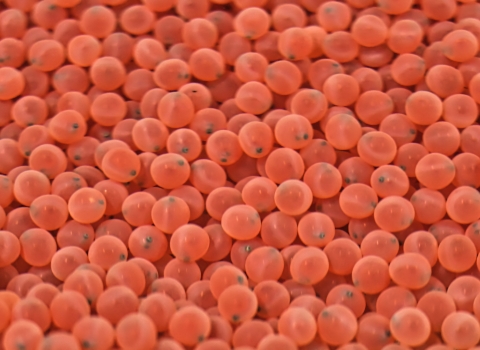