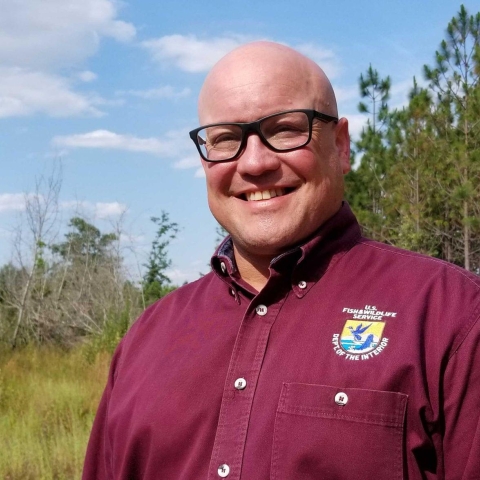 Leopoldo “Leo” Miranda is the Southeast Regional Director of the Department of the Interior’s U.S. Fish and Wildlife Service. He oversees the work of approximately 1,300 employees in carrying out the Federal Government’s partnership role in conserving fish, wildlife, and plant resources and their habitats within 10 southeastern states, Puerto Rico and the U.S. Virgin Islands.

Leo began his work with the Service as a Private Lands biologist in his native Puerto Rico, later becoming the Program Supervisor of the Service’s Chesapeake Bay Field Office in Annapolis, Maryland, followed by Assistant Regional Director of the Southeast Region’s Ecological Services Program. An advocate of public-private conservation partnerships, he points to the success of the shade-grown coffee industry as an example of how government organizations and private landowners can work together to achieve win/win outcomes for people and for wildlife.

On any given weekend, you are likely to find Leo in a tree stand or by a river, hunting or fishing with his son, Pablo. Leo attributes much of their shared love of nature and commitment to conservation to the pursuit of these outdoor recreational pastimes. Leo holds a Bachelor of Science in Marine Biology from the University of Puerto Rico and a Master of Science in Zoology from North Carolina State University. He and his wife, Jessica, Pablo, and their four-legged family members live in Marietta, Georgia.