Selawik National Wildlife Refuge is located in northwest Alaska, in the homeland of the indigenous Iñupiat. Straddling the Arctic Circle, the refuge is where the boreal forests of interior Alaska give way to the open tundra. The rivers, wetlands and surrounding hills (including the Selawik Wilderness Area in the Waring Mountains) nurture abundant fish populations, tens of thousands of nesting birds, seasonal habitat for one of the world’s largest caribou herds, and an ongoing way of life for local people, who continue to hunt, fish, and gather from these lands that have sustained their ancestors for thousands of years. Over two million acres of land make up the refuge, which straddles the Arctic Circle and offers adventure and rejuvenation for visitors.

The Selawik Wilderness was established in 1980 and is 240,000 acres in size. “Wilderness Areas” are undeveloped places where natural forces still dominate and opportunities for solitude can be found. In most of the U.S., Wilderness Areas (set aside by Congress) serve as quiet roadless havens where mechanical vehicles and motorized equipment are not allowed. In Alaska, much of the state is roadless and undeveloped, and Wilderness Areas afford an extra level of protection to keep them that way. Unlike the lower 48, traditional means of access, including snowmachines and airplanes, can be used in some of Alaska's Wilderness Areas.

As a trusted resource steward and community partner, the Selawik National Wildlife Refuge will enhance and protect the quality of life found in northwest Alaska by sustaining the ecological integrity of the Selawik River drainage and the Kobuk River delta. Fish and wildlife will continue to thrive in this remarkable environment, as will subsistence, cultural, and recreational uses of these resources.

With vision and resourcefulness, the refuge will proactively monitor the uncertainties associated with climate change climate change
Climate change includes both global warming driven by human-induced emissions of greenhouse gases and the resulting large-scale shifts in weather patterns. Though there have been previous periods of climatic change, since the mid-20th century humans have had an unprecedented impact on Earth's…

Learn more about climate change . The refuge will foster productive relationships with local communities and governments, indigenous people and tribes, visitors, scientists, neighboring landowners, and others to promote resource health, respond to community and educational needs, and perpetuate an enduring natural legacy for future generations of Americans (this vision was developed as part of 2011 Comprehensive Conservation Plan).

Each unit of the National Wildlife Refuge System is established to serve a statutory purpose that targets the conservation of native species dependent on its lands and waters. All activities on Selawik Refuge lands are reviewed for compatibility with its statutory purpose. 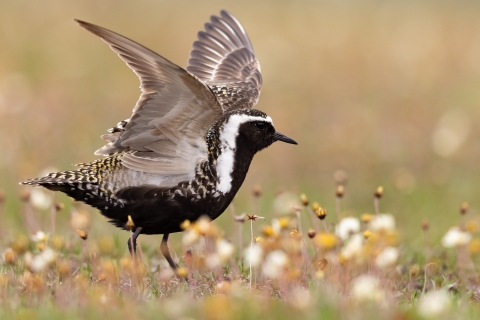 The purpose(s) of this refuge are:

Today most regional residents are of Iñupiaq descent. The villages of Selawik (pop. ~1000) and Noorvik (pop. ~700) are within refuge boundaries. The larger town of Kotzebue (pop. ~3,300) and the villages of Ambler, Buckland, Shungnak, Kiana, and Kobuk are all within 30 miles of refuge boundaries. Residents of these communities continue to utilize refuge lands as the Iñupiat have for generations.

Although the past century of western contact has brought many changes for Arctic peoples, one thing that remains is the cultural knowledge of the land and the resources that has sustained the Iñupiaq way of life in this area for thousands of years.

With its far north location, the Selawik Refuge and the activities of local residents change dramatically throughout the seasons. During the arctic winter, blizzards create deep snow drifts, while sub-zero temperatures lock the waterways in thick ice. During the winter, local residents travel between villages by snowmachine and dog team on a system of well-used winter trails. Many residents continue outdoor pursuits such as hunting animals for both meat and fur, gathering firewood, and fishing through the ice. With the return of spring and then summer, the land absorbs the returning sun, and productive, thawing wetlands greet the arriving migratory birds. Subsistence bird hunting and fishing occur throughout the spring and summer. Later in the year, brilliant fall colors signal a time for berry picking, caribou and moose hunting, and the first frost. Life here is closely linked to the seasons and the land, and each time of year has its own special beauty and character.