Key Cave NWR was established in 1997 under the authority of the Fish and Wildlife Act of 1956, the Endangered Species Act of 1973, and the National Wildlife Refuge Administration Act of 1966, to ensure that the biological integrity of Key Cave, Collier Cave, Collier Bone Cave, and their common aquifer remains intact. Key Cave is the only known location for the federally endangered Alabama cavefish (Speoplatyrhinus poulsoni) and lies on the northern shore of Pickwick Lake in a limestone karst area that contains numerous sinkholes and several underground cave systems. The area’s sinkholes are an integral component of groundwater recharge to the caves.

Prior to 1992, the Monsanto Company owned a large 1,060-acre tract of land just north of Key Cave and about five miles southwest of Florence, Lauderdale County, Alabama, in the high-hazard risk area of the Key Cave aquifer. In 1992, the company sold this tract to The Conservation Fund, which held the land until the Service acquired the land five years later to establish Key Cave NWR. 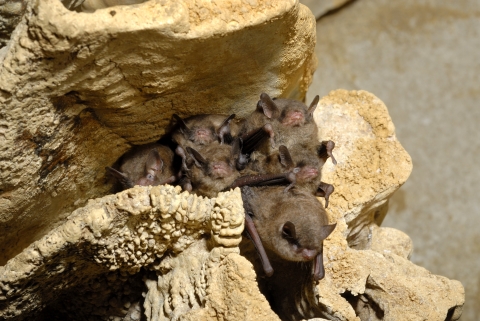 In addition to the Alabama cavefish, Key Cave also serves as a priority one maternity cave for the federally endangered gray bat (Myotis grisescens), as well as habitat for two species of blind crayfish (Procambarus pecki) and (Cambarus jonesi). Collier Cave, located approximately 1.5 miles upstream from Key Cave, and Collier Bone Cave are also considered potential habitat for these cave species. Cave entrances are located on TVA lands on the northern shore of Pickwick Lake.

Key Cemetery, which may have been a slave cemetery, is located on the refuge and may yield clues as to the historical land use of the refuge. Lands within the Key Cave recharge area have been in agricultural production for many years. Historically, lands that are now part of the refuge were used primarily for cotton farming.