If you live in southcentral Alaska, there’s a good chance you’ve driven or hiked through the 2019 Swan Lake Fire. If you’re like me, maybe you’ve marveled over the variability within the burn and how quickly things have changed. Areas covered by fallen trees and ash in 2019 were fields of fireweed last summer. In other areas, dead, burned trees still stand, and shrubs and aspen are coming up in the understory.

Many of these differences can be explained by the vegetation present before Swan Lake, which was influenced by fires years ago, and weather conditions before and during the fire. These factors affect the resulting burn severity and how a site recovers.

Burn severity is loosely defined as the degree to which a fire alters a site. It involves the consumption of fuels, focusing on the litter and organic layers on and below the surface and survivorship or mortality of plants. In boreal forests, consumption of duff — the often deep layer of slowly decomposing moss and plant litter — plays a strong role in burn severity and patterns of plant succession. (Visit this story map about another 2019 fire near Fairbanks to learn more about burn severity).

Weather patterns and fire behavior varied during Swan Lake’s 146-day duration. When it started on June 5th, a metric called the Buildup Index (BUI), which indicates the dryness and availability of duff for burning and fire behavior potential, shifted from below average to average. The BUI started climbing later in June and surpassed previously recorded highs in early July. The fire slowed after receiving rain in late July, but high temperatures and dry conditions returned. On August 18th, when strong winds from the north pushed the fire across the Sterling Highway, the BUI was back to extreme levels. For more information about events surrounding the fire, check out this Swan Lake Story Map.

When the BUI was at average levels earlier in the fire, burned areas typically exhibited mixed burn severity characterized by blackened duff, occasional trees surviving, shrubs and deciduous trees resprouting from living root systems, and patches of deeper burning that exposed mineral soil. When the fire crossed the Sterling Highway, the duff was so dry in some places that the fire smoldered and consumed it entirely so that trees fell, with intact green leaves or needles and mostly unburned trunks, because the material around their roots was gone. The fire killed shrub roots, and they couldn’t resprout. Colonizers like fireweed quickly seeded in on the exposed mineral soil.

The 1996 Hidden Creek Fire burned 5,161 acres south of the highway near the Upper Skilak Lake Campground. We established vegetation study plots the following year. The Swan Lake Fire did not move into the burn scar very far, stopped by the forest of Alaska birch and other deciduous trees and shrubs that had regrown in the intervening 23 years. However, it managed to burn two of the plots at the end of August when the BUI was at extreme levels.

When the plots were revisited in 2020 and 2021, we saw that the fire consumed most vegetation to mineral soil, killing the roots of shrubs and deciduous trees so that they did not resprout. The ground was mostly covered by moss or fireweed but tiny Alaska birch and willows that had quickly seeded in from the adjacent forest were mixed in with the fireweed.

There is a third burn severity story within Swan Lake. Far up Mystery Creek Road is an area burned by prescribed fire in 2002 and Swan Lake in 2019. Kenai Refuge biologists established permanent plots prior to the planned burn and collected vegetation and fuels data in 2004.

We revisited the plots in 2021, and they were notably different than the plots that only burned during Swan Lake. The prescribed fire had killed most of the mature black spruce. By the time the Swan Lake Fire reburned the plots, small spruce, deciduous trees, and shrubs were present.

While the Swan Lake fire killed most of the young spruce, deciduous trees were resprouting and, compared to plots without prescribed fire, the measured burn severity was lower and plant diversity was higher. Duff layer depth may be shallower after two recent burns making it more vulnerable to future fire and potentially affecting successional patterns. There were also few black spruces old enough in the twice-burned plots to have mature seeds that enable regeneration.

These monitored plots will provide more information in the years to come about plant recovery following repeat fires and the potential role of prescribed burning. They also highlight the value of tying fire weather indices and remotely sensed data such as satellite imagery and map products to on-the-ground observations of fire effects. 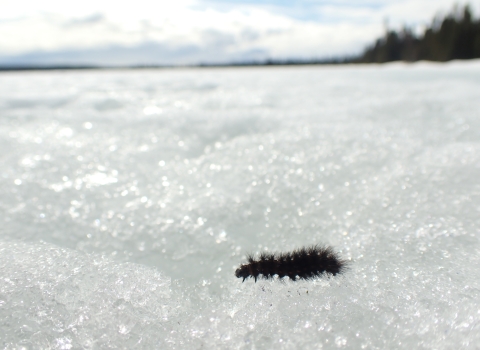 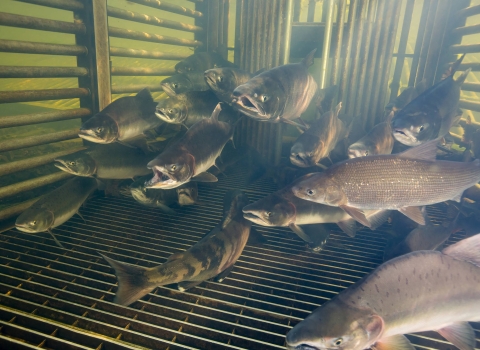 Science and Technology
Anatomy of a Fish Weir 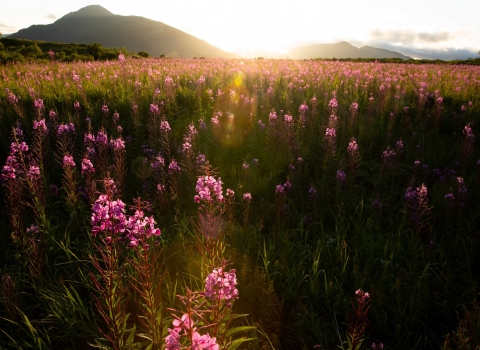