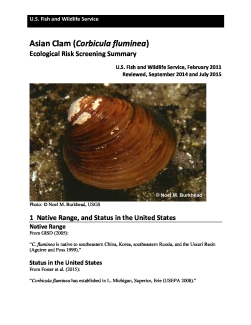 C. fluminea has become an established invasive species invasive species
An invasive species is any plant or animal that has spread or been introduced into a new area where they are, or could, cause harm to the environment, economy, or human, animal, or plant health. Their unwelcome presence can destroy ecosystems and cost millions of dollars.

Learn more about invasive species in many parts of the United States. With a very high climate match, the species has the potential to establish across the country. The ease of spread, large numbers of offspring produced sexually or asexually, wide habitat tolerances, ability to outcompete native species, and potential to cause negative economic impacts make this a very high risk species.