Lorianna Breiler speaks with a smile audible in her voice when she talks about the future of her family on Badger Mountain in Douglas County, Washington.

“We don’t think of this land as ours. We think of it as belonging to our future children. We are simply stewards of their inheritance,” the owner of Breiler Farms says. Six generations of her family have lived on the 2,480 acre farm.

Many things make this landscape special for Breiler: rolling mountains, abundant sunshine, diverse wildlife and, now, a partnership protecting one of the last stronghold of greater sage-grouse in Washington.

Sage-grouse are a charismatic symbol of the West, best known for the “dance” they do to attract a mate. These large, chicken-sized birds are famous the world over for their ostentatious displays in which the brown-and-black males puff up and “pop” their white ruff to inflate yellow air sacs in the hopes of catching the eye of a female. This unique show takes place on a lek – a large patch of bare ground where grouse nest – from March to May. The remainder of the year, outside of lek season, the sage-grouse are inconspicuous but remain dependent on their lek areas and extremely sensitive to disturbance in habitat.

Over the years, leks have become few and far between in Washington. Breiler’s area of Douglas County is currently home to the largest lek in Washington, more than twice the size of the average lek in the state. Due to the conversion of natural habitat to human development, sage-grouse occupy only 8% of their historic range in Washington.

“The spread of invasive plants like cheatgrass and wildfire have further reduced this small habitat holdout for the greater sage-grouse,” says Kimberly Veverka, a wildlife biologist with the U.S. Fish and Wildlife Service. “As a result, any remaining habitat - largely the Badger Mountain Plateau - is vital to sustaining and recovering this state endangered bird.”

The loss and fragmentation of habitat is a formidable threat to the stabilization and recovery of this population of sage grouse. Thankfully, powerful partners are joining forces to protect this land in perpetuity. Driven by the innovative Bipartisan Infrastructure Law, this partnership builds on an existing collaborative effort with public and private partners to conserve the sagebrush sagebrush
The western United States’ sagebrush country encompasses over 175 million acres of public and private lands. The sagebrush landscape provides many benefits to our rural economies and communities, and it serves as crucial habitat for a diversity of wildlife, including the iconic greater sage-grouse and over 350 other species.

Learn more about sagebrush ecosystem of the American West and the nationally significant biological, cultural and economic resources it supports.

On Badger Mountain, this collaboration manifests itself with the Natural Resources Conservation Service, the Chelan-Douglas Land Trust, and the Service joining forces with three working ranches. With the $186,000 from the Bipartisan Infrastructure Law, the Chelan-Douglas Land Trust will purchase three agricultural land easements, including one on Breiler’s farm, to protect 10,000 acres of sage grouse habitat.

The easements will allow the Breiler farm and others to remain as working farms while enhancing conservation efforts for today and the future.

Securing the land, signing the agreements, and monitoring the easements is complex work that often takes years.  “We do our due diligence to ensure compatibility between conservation needs and landowners; this is a process that takes patience and perseverance,” says Mickey Fleming, lands program manager for the Chelan-Douglas Land Trust.

In addition to protecting this crucial piece of sage-grouse habitat, Fleming explains that these easements will serve as connections to other established lands managed by the Bureau of Land Management  and Washington Department of Natural Resources.

“Right now the habitat is sort of like a patchwork of disparate and disconnected spots of good sagebrush habitat,” Fleming says. “The ultimate goal is to get as many entities as possible to come together on these easements and provide an expansive, connected landscape for the greater sage-grouse.”

Thanks to the funding from the Bipartisan Infrastructure Law and the tenacious teamwork of those on the landscape, this goal is one step closer. 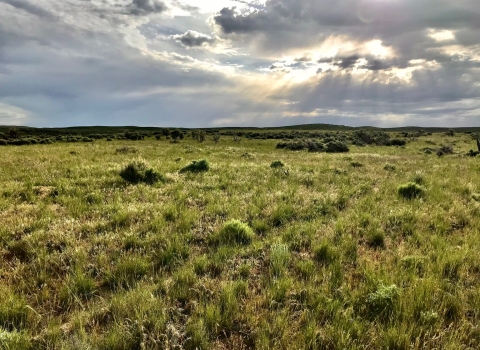