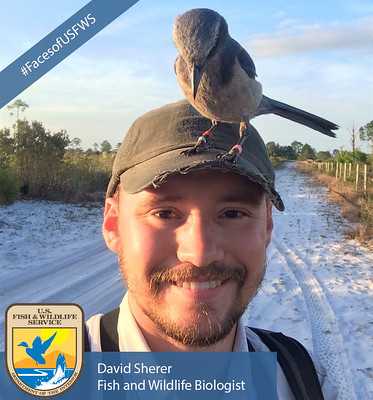 Meet one of our newest fish and wildlife biologists, David Sherer! David recently completed his master’s degree in biology at the University of Central Florida with a thesis in the ecology and behavior of Florida scrub-jays, a federally threatened bird. He served as a Directorate Resource Assistants Fellow (DFP) with the Attwater Prairie Chicken National Wildlife Refuge in Eagle Lake, Texas, before joining the U.S. Fish and Wildlife Service in Ventura this spring. Learn about his projects and research in our latest Faces of the U.S. Fish and Wildlife Service interview.

Hazel Rodriguez: What led you to a career with the U.S. Fish and Wildlife Service?

David Sherer: I grew up in a semi-rural island community in northeast Florida, so as a kid I spent much of my time outdoors. This exposed me to wildlife almost daily and I became interested in learning about the natural world. My grandparents were science educators, so a career in biology became my occupational focus.

I learned about the U.S. Fish and Wildlife Service while in college and decided the Service was where I wanted to work: our agency is the premier federal conservation organization, and my own interests in conserving and perpetuating the same biodiversity I grew up with are strongly aligned with the Service’s mission. I tailored my coursework and professional experiences toward acquiring the skills I saw listed in job announcements, but I quickly determined that I needed a competitive edge in the form of an advanced degree. I bridged a three-year gap between undergraduate and graduate study with research internships at NGOs in California and Florida: Point Blue Conservation Science, and Archbold Biological Station (where I did my thesis research).

During the last year of my master’s I completed a Directorate Resource Assistants Fellowship (DFP) with the Service at the Attwater Prairie Chicken National Wildlife Refuge in Eagle Lake, Texas. It was, in a sense, an extended interview – I completed critical work during an 11-week project while also learning about the Service in the best way I knew how: hands-on. And I liked what I saw! I was oriented to the Service during a one-week training session at the National Conservation Training Center in Shepherdstown, West Virginia with my fellow DFP cohort, and I came away with the outlook that the Service is a family. My mentors in the field at Attwater were also wonderful people: kind, knowledgeable, and invested in my personal and professional development as an early-career biologist. After finishing the fellowship and completing my master’s degree. I was eligible for direct hire with the service, and I jumped at the chance.

HR: Nice work David, I'm glad you found your place in the U.S. Fish and Wildlife Service! What role do you currently play within the agency?

DS: I am a newly minted fish and wildlife biologist. I spend half of my time in the South Coast Division, where I consult with other federal agencies to facilitate their responsibilities under the Endangered Species Act by reviewing projects that may impact listed species. Any time a federal agency authorizes, funds, or carries out such a project in our area it comes through our office for review.

The remaining portion of my time is spent in data science and geographic information systems (GIS) analysis and development, in partnership with the Moss Landing Marine Lab’s Coastal Ocean Mammal and Bird Education and Research Surveys project – a citizen science initiative better known as BeachCOMBERS. I work with BeachCOMBERS staff, volunteers, and partners to develop practical solutions to collect, manage, analyze, and interpret survey data. The Service is entrusted with conservation on behalf of the public, so working with citizen scientist volunteers is a very special partnership.

HR: Where did you go to school and what did you study?

DS: I hold a bachelor’s degree in wildlife and fisheries science with a concentration in conservation biology from Tennessee Tech University. As an undergraduate I taught botany and zoology labs, and worked with graduate students on ecological research while also pursuing my interest in GIS – first as a student, and then as a teaching assistant.

This past December I completed my master’s degree in biology at the University of Central Florida. For my thesis I investigated how a Florida scrub-jay’s personality (bold or shy), and the habitat they grew up in, predicted where young jays chose to explore before eventually finding their own breeding territory.

HR: Congratulations on your master’s degree! Of all the species our agency works to protect along the central California coast, which is your favorite? Why?

DS: I’m quite fond of the coastal California gnatcatcher, a sub-species that only occurs in the southwestern portion of the state. They’re small, gray birds that occupy coastal scrub and chaparral habitat, which is widely threatened by commercial and residential development. They’re my favorite because of their similarity to my two all-time favorite birds: Wrentits, which also occupy coastal scrub habitat in California, and Florida scrub-jays, which are in Florida scrub. Incidentally, all three of species are permanently territorial and monogamous. I guess I’m a bit of a fanatic for little birds that spend their lives in the scrub.

HR: I will have to pick your brain on birds later. For now, tell us about a particular project from your career or schooling that makes you proud.

DS: I am very proud of the research I did as a master’s student. I spent nine months over three years in the field collecting data and even more time in front of a computer framing my hypotheses and asking what it all means. But the time paid off: I was able to determine that Florida scrub-jays, which depend on prescribed fire to maintain their habitat in a livable condition, have very different preferences from one individual to another when exploring.

Because habitat is so limited for this species, young jays will stay with their parents for one or more years until they find an opportunity to disperse. During this time they foray (temporarily explore) the landscape away from their home territory. I hypothesized that, because their habitat is rare there isn’t enough space for all birds to disperse, and because habitat burned within the last two to 10 years (even rarer) is ideal, individuals might avoid competing for limited space by preferring to explore different habitats.

The results of my science bore this out. I demonstrated that young jays can have very different preferences from one another and determined the underlying causes of variation between individuals. Florida scrub-jays “stick to what they know” and prefer to explore habitat in a similar time-since-fire interval (TSF; history of fire) as their home territory. Because fires are patchy, this interval is highly variable across the landscape, so jays come from a wide variety of TSF. I also learned that whether a jay was bold or shy influenced their exploratory behavior. Jays with a shy personality were extremely reluctant to explore habitat that was burned within the past two years, much more so than bold jays, who didn’t seem to care one way or the other.

HR: I wonder if I would be a bold or shy jay? Probably bold. David, how do you spend your free time?

DS: I love food culture and enjoy exploring new restaurants and cuisines. I’m also particularly fond of breweries and make it my mission to sample local beers whenever I travel, which is often for work and leisure. As an avid outdoorsman I can’t get enough of hiking and birding, and in keeping with my love of citizen science I readily eBird those excursions. I’ve recently gotten into target shooting, because I don’t spend enough time outdoors already!

HR: Do you have a hidden talent? If so, what is it?

DS: It’s not quite a “hidden” talent because folks tend to learn about it quickly, but I am quite good at identifying birds by sound. It’s gotten to the point that friends and family will send me grainy video clips with a call or song in the background and ask, “who’s that bird?”