What were you doing when you were 20? Seventy five years ago, in May, 1943, Joseph Sasser was wading, gun in hand, onto a beach on remote Attu, the westernmost island in Alaska’s thousand mile chain of Aleutian Islands. Mr. Sasser took part in the only World War II land battle fought on North American soil, to wrest Attu back from Japanese occupying forces.

For Mr. Sasser, the war is almost a lifetime ago, but is most certainly not forgotten. He and his fellow veterans endured sacrifices along with the Alaska Native Unangax̂ people whose lives and lands were forever altered by the war.

From Refuge to Battlefield…

Attu Island and another Aleutian island, Kiska, share a unique history. These islands, both part of the Alaska Maritime National Wildlife Refuge, were refuge lands dedicated to wildlife before being captured by enemy forces during the war.

They withstood intense conflict when retaken by American forces during the war, and were returned to peaceful wildlife havens after the war.

Key battlefield areas of Attu and Kiska, along with a portion of Atka Island, are part of the Aleutian Islands WWII National Monument established to recognize the sacrifice of soldiers and civilians affected by the Aleutian Campaign.

People of the Sea: A Return to Attu

But these lands hold memories far older than the war or the refuge system. Along with bird songs, rushing streams, and crashing waves, on Attu one can also hear echoes of the People of the Sea, the Unangax̂, who occupied these lands for some 3000 years.

Unangax̂ (later dubbed “Aleut” by Russian explorers) lived throughout the Aleutians, hunting sea mammals, fishing, harvesting seabirds, waterfowl, and other wildlife as they developed a rich maritime culture. Despite disease, violence, and other difficulties associated with both the Russian and American exploration and fur harvest periods, a small thriving Unangax̂ community remained on Attu until June, 1942, when Japanese invaders forever changed the villagers’ lives.

Following the war, survivors could not return home to resettle Attu. In 2017, 11 descendants of Attu Village returned to the island aboard the Alaska Maritime National Wildlife Refuge Research Vessel Tiglax̂, as part of the 75th anniversary commemoration. It was their first visit to the place their parents and grandparents called home. The descendants placed a memorial to their lost ancestors and gathered grass to craft baskets in the style for which Attu was famed.

Learn more about national wildlife refuge ’s history, and in the lives and legacies of people who lived and died on a remote and rugged island that rises out of fog as far west as one can journey in North America. American forces suffered more than 3000 casualties on Attu, including 549 dead. Nearly 2400 Japanese soldiers died; only 28 survived the Battle of Attu. Nearly half of the Unangax̂ residents of Attu, taken as prisoners to Japan, died during their captivity.

The people who lived on the island, the soldiers on both sides who fought there, and the descendants of all of these citizens and warriors will forever bear marks of battle. Today, while Attu still bears the scars of battle, it also shows the soothing grace of reconciliation and healing. So too the people. During 75th anniversary commemoration events, Joseph Sasser, no longer carrying that rifle, joined other veterans, Attu descendants, and Japanese soldiers’ descendants, coming together in peace to honor the valor of all involved.

Learn about the history of the “The Forgotten War” on Alaska Maritime National Wildlife Refuge with an interactive Story Map.

Watch a short video about the Battle and the 2017 return to Attu with 11 Unangax descendants.

Take a virtual photo tour of Attu, Kiska, and Atka: part of the Valor of the Pacific National Monument. 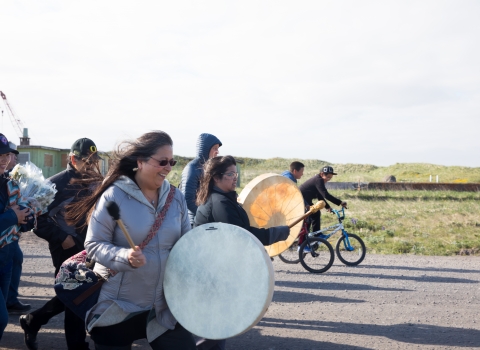