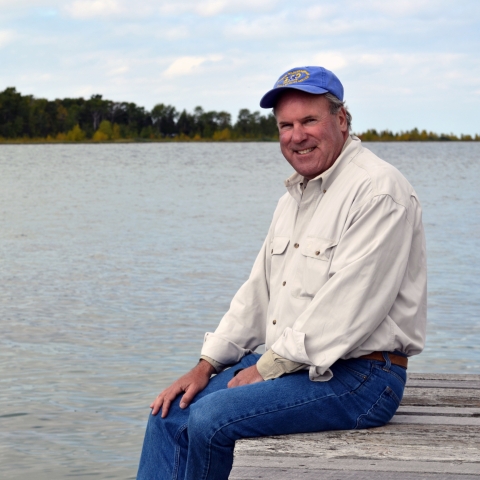 Charlie Wooley was named Regional Director for the Midwest Region of the U.S. Fish and Wildlife Service in 2019. Wooley has been honored with many awards throughout his career, including the George Bird Grinnell Memorial Award for Distinguished Service in 2022 - the highest individual honor in natural resource management.

Wooley's career with the Service started in 1978 and includes work as a fishery biologist in Alaska, Florida and Maryland. Later, he served as a program analyst in Washington, D.C., where he worked with the President’s Domestic Policy Council Interagency Task Force on Wetlands and the Merchant Marine Fisheries Committee for the House of Representatives. Wooley also participated in the Interior Department Leadership Training Program.

After spending time in Washington, D.C., Wooley was the field supervisor at the East Lansing Field Office in Michigan for eight years. He has continuously served as the Department of the Interior’s Trustee to the Great Lakes Fishery Trust since 1997. Wooley also serves as our agency's senior executive representative on the Invasive Carp Regional Coordinating Committee, the Great Lakes Restoration Initiative and the Executive Council advising tribal fisheries management for U.S. vs. Michigan (Treaty of 1836).

Continuing his career in the Midwest Region, Wooley served as the Assistant Regional Director for Ecological Services and oversaw endangered species, contaminants and wetland protection programs, as well as various Great Lakes and Mississippi River activities.

Beginning in 2004, Wooley served as Deputy Regional Director where he assisted the Regional Director to formulate, develop and lead programs, policy and procedures to carry out the U.S. Fish and Wildlife Service mission in the eight states of the Midwest Region.

In December 2018, Wooley was appointed by the President to serve a six-year term as the Federal Commissioner representing the United States on the Great Lakes Fishery Commission.

Wooley is the author of 15 technical papers on the biology and life history of the striped bass, sturgeon and ecosystem restoration. He was named by the Director of the U.S. Fish and Wildlife Service as one of 10 Unusually Outstanding Employees in the Service in 1989 and 1992. Wooley is a graduate of the University of Wisconsin - Stevens Point. He and his wife reside in Lakeville, Minnesota.