Outlines how landowners, agencies and organizations can help the species and remove it from Endangered Species List

SACRAMENTO – The U.S. Fish and Wildlife Service (Service) is seeking public input on a draft recovery plan for the threatened Central California Distinct Population Segment of the California tiger salamander (Ambystoma californiense). The draft plan describes how agencies, non-profit organizations and private landowners can improve the species’ status so that it will no longer require protection under the Endangered Species Act.

The draft plan addresses the entire range of the Distinct Population Segment, which occurs within the Central Valley and surrounding foothills, and Inner Coast Range from San Luis Obispo, Kern, and Tulare counties in the south, through to Sacramento and Yolo counties in the north.

With a high potential for recovery, the species will benefit from wide-spread voluntary conservation efforts such as those laid out in the plan. Healthy, self-sustaining populations of Central California tiger salamanders require open areas of grasslands, as well as seasonal breeding pools. The recovery plan is designed to conserve and manage the salamander’s habitat; maintain genetic diversity; minimize the threats of disease, contamination, invasive animals and predators; and improve understanding of the species through research and monitoring.

Recovery plans are not regulatory documents, nor do they require property owners undertake specific actions. They are roadmaps the Service and its partners can follow to help recover threatened and endangered species. Recovery actions described in the draft plan for the Central California tiger salamander are consistent with many current land uses within the species’ range.

The Service is seeking comments that provide new information pertinent to the plan, such as observed occurrences of the salamander, new scientific information or evaluation of the plan’s recovery elements. Please submit all information by May 10, 2016. Written comments can be sent by U.S. Mail or facsimile to: Rick Kuyper, Endangered Species Program, U.S. Fish and Wildlife Service - Sacramento Fish and Wildlife Office, 2800 Cottage Way, Room W-2605, Sacramento, California 95825, Fax: (916) 414-6713.

Comments can also be submitted electronically to fw8sfwocomments@fws.gov. 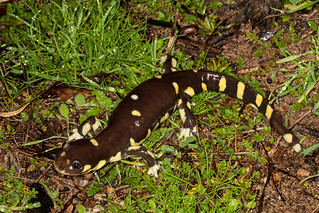 A large, dark and stocky amphibian, the Central California tiger salamander spends most of its life underground in the burrows of small mammals like gophers and ground squirrels. They migrate from burrows across grasslands to seasonal wetlands, taking advantage of the small ponds to breed. Recovery actions outlined in the draft recovery plan will help other animals besides the salamander. Raptor species such as burrowing owl and red-tail hawk, and vernal pool dependent species such as the western spadefoot toad and vernal pool tadpole shrimp will also benefit from the plan.

An array of short-term and long-term strategies over a 50-year timeline relies on partnerships among numerous agencies, non-governmental organizations, and private landowners to protect and restore salamander habitat.

To facilitate recovery and management decisions, the plan has classified four recovery units based on genetic variability of the Central California tiger salamander. Recovering the population in all four units is necessary for the long-term sustainability of the population. In some cases, the amount of protected habitat required to achieve delisting criteria have already been met.

Following the close of the current public comment period, the Service will evaluate new information received and prepare a final plan, which is expected to be completed by the end of 2016.

More information, including the complete plan is available at http://www.fws.gov/sacramento/.

The mission of the U.S. Fish and Wildlife Service is working with others to conserve, protect, and enhance fish, wildlife, plants, and their habitats for the continuing benefit of the American people. We are both a leader and trusted partner in fish and wildlife conservation, known for our scientific excellence, stewardship of lands and natural resources, dedicated professionals, and commitment to public service. For more information on our work and the people who make it happen, visit http://www.fws.gov/cno. Connect with our Facebook page, follow our tweets, watch our YouTube Channel, and download photos from our Flickr page.