Saving Elephants, Even Their Toenails

This is just one of about 1.3 million items housed at the National Wildlife Property Repository. Photo by USFWS

As the August 12 celebration of World Elephant Day falls upon us, I cannot help but take the time to reflect on my own experiences in the long-standing global fight against the illegal killing of elephants. I have not set foot in Africa or Asia, nor have I ever been able to watch a live wild elephant trudge its way through a jungle or savannah. However, images of those trudging giants flooded my mind as I stood in the center of my office holding a large elephant toenail in my hands. The box I pulled it from was packed densely with what appeared to be tea leaves, and I noted two other smaller toenails nestled within.

The toenails came as a little surprise to me. Ivory has always been the standard “treasure” plucked from elephants and used for trinkets, statues, pianos and a whole host of other items that symbolize “status.” Until I saw the elephant toenails, it hadn't quite occurred to me that other elephant parts can be just as valuable.

In an effort to conserve elephants, countries across the world agreed to implement an international moratorium on the trade of ivory. While the floodgates of commercial imports have closed, and world leaders recognize the importance of conserving this species, unfortunately, the illegal trade of ivory continues.

Although elephant toenails do not fall under the same international moratorium as ivory, the Endangered Species Act (ESA) prohibits the unlawful import of endangered or threatened animals or their parts.  The implementing regulations under the ESA also require that all wildlife be properly declared upon import. The toenails were definitely not herbs, as the label on the box declared, and I suspected that the overly fragrant tea leaves were not just there for packing purposes but to evade law enforcement.

These elephant toenails were shipped into the United States and were intercepted without declaration to the U.S. Fish and Wildlife Service. Photo by USFWS

After some research, and with the help of a Hmong translator, I found myself and a couple of other special agents standing in the small cold living room that belonged to a tiny old woman. It quickly became apparent that our investigative skills had paid off when the woman proudly explained that she was the local “witch doctor” in the community and had ordered the toenails. I do not remember her name, but I remember that she wore a distinctive red stocking cap with earflaps. I can still hear the different sounds of the Hmong language she uttered as she showed us her collection of powdered elephant toenail shavings she used to “cure” everything from epilepsy to migraines. She explained how she filled tiny plastic bags with shavings from the toenails and sold them for $25 each. 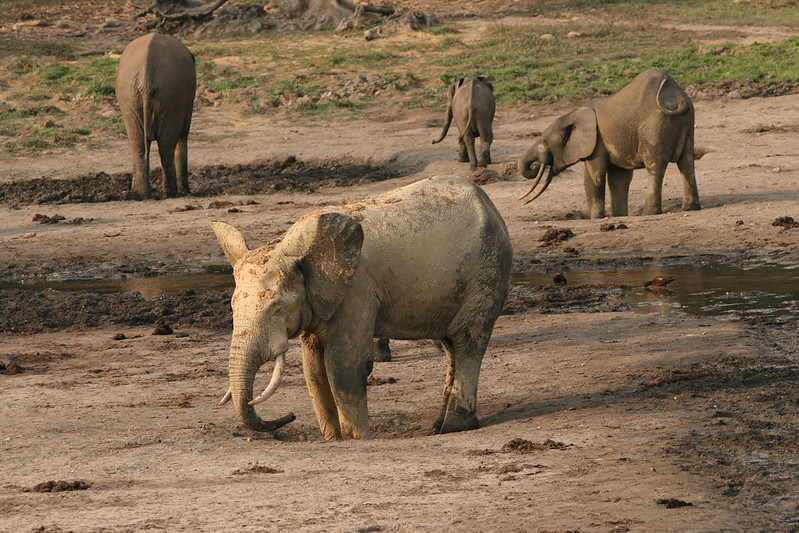 Both sexes in African elephants have ivory tusks. Elephant males have bigger, thicker tusks than females. Photo by Richard Ruggiero/USFWS

As the discussion progressed, one of my fellow agents informed the woman that what she did was illegal. In response, she told us that the animal was dead and she planned to use the toenails for good, so to her, it could not be illegal. At this, I stared at the woman. Here we were, two different people from two different cultures, with two very different views of the law. I could understand her point of view since the elephant, clearly, was dead. However, without federal laws in place to regulate the import of elephant parts, I doubt there would be many left in the wild, if any.

I look back on that day and reflect on our cultural differences and beliefs. It is clear to me that our seizure did not create a sense that the conservation of elephants is more important than selling tiny bags of their shaved toenails.  For a time I was discouraged by this and wondered if I was really making a difference on the trade, but then it finally occurred to me. Perhaps the impact that day was not on her, but rather on me. The experience itself left me with a better understanding of the methods of smuggling wildlife and some of the cultural beliefs that can drive the trade. Perhaps it would be wiser to not focus on the why, but rather just acknowledge that the why exists. With all this in mind I move forward and continue working, as diligently as ever, to protect elephants, one seizure of elephant toenails at a time.