Modeling a Future for Horseshoe Crabs and Red Knots 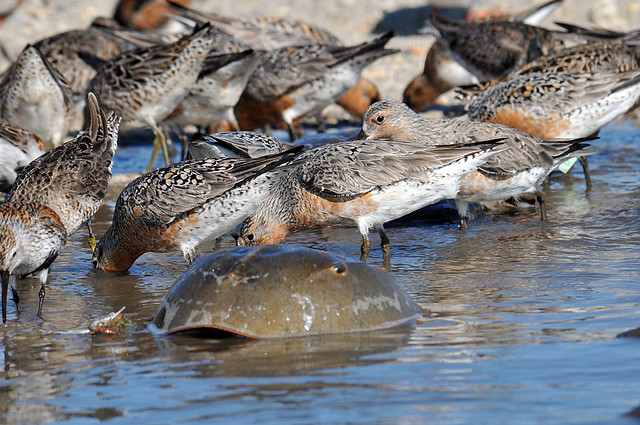 Horseshoe crabs have been around hundreds of millions of years, and in that time they have attracted a lot of fans, especially around Delaware Bay.

The fishing industry uses them as bait in the conch and American eel fisheries on the Atlantic Coast.

The pharmaceutical and medical industry uses them for their blood to produce a clotting agent that helps detect pathogens that could hurt people.

The red knot, a migratory shorebird, is also a big fan — the bird feeds on horseshoe crab eggs to fuel their 9,000-mile migration from wintering grounds in South America up to breeding grounds in the Arctic. And they migrate at the same time of year every year, landing in the Delaware Bay right when horseshoe crabs are spawning.

So much demand puts tremendous pressure on the horseshoe crab population and red knots.

The drop in shorebirds led to a series of harvest restrictions as well as intense debates for the next 15 years, and in 2006, New Jersey and Delaware asked for help from the Atlantic States Marine Fisheries Commission in regulating the harvest of horseshoe crabs.

A team of scientists, led by Dr. Conor McGowan from the U.S. Geological Survey (USGS) along with Dr. David Smith (USGS), and Drs. John Sweka and Mike Millard of the Service, came up with a way to make decisions about horseshoe crab harvest, while safeguarding the survival of the red knot.

The solution is an amazing mathematical model of the unique relationship between two species, which also considers the economic value of the horseshoe crab fishery. The scientists weaved together the ecology and biology of the red knot with the ecology and biology of the horseshoe crab to come up with predictions for the survival of red knots based on the abundance of spawning horseshoe crabs. And once the scientists had the basic model, like the lead character in the movie Martian, they “scienced the &*%# out of it” to come up with a model that describes important ecological and economic features.

Besides the science, the team worked with stakeholders to make sure that affected parties understood how the model worked and could trust future decisions.

“Over the past 15 years, the single-species approach for managing the horseshoe-crab harvest was frequently mired by conflicting values among the various groups. This collaborative resolution is helping to reduce that conflict,” says Millard.

As an adaptive management framework, says ecologist and statistician Smith, “one of the features that makes [the model] so useful is that it allows ‘learning’—new information is added into the model, which improves management over time.”

Like all global migrants, the red knot population faces many threats outside of Delaware Bay. But the new model will help ensure that its migration super-food remains available.