El Dia de los Muertos, or Day of the Dead, is celebrated each November across Mexico and the United States in remembrance of loved ones who have passed away and to celebrate the annual return of their spirits to Earth. During this same time of year, one of the world’s most recognizable species - the monarch butterfly - takes a 3,000 mile journey from Canada and the United States to the central highlands of Mexico.  Some monarch butterflies migrate west of the Rocky Mountains to coastal California to spend the winter. 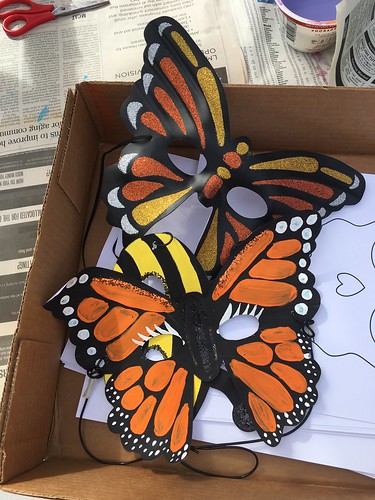 In some Hispanic cultures, these miracle migrations represent the souls of ancestors on their spiritual journey.

Monarch butterflies that overwinter along California’s central coast serve as iconic reminders of El Dia de los Muertos tradition for Hispanic communities within the region. This year, Curren School in Oxnard, Calif., a coastal town in Ventura County north of Los Angeles, partnered with the U.S. Fish and Wildlife Service to host El Dia de los Muertos Monarch Butterfly Festival to celebrate the migration of the monarch butterfly and to educate the public about the risks facing the iconic species.

Celebrating and Learning About the Monarch
Kelly Castillo, Principal of Curren School, which teaches more than 1,100 students from kindergarten through eighth grade, says the school is a model for enriching youth in urbanized areas through environmental studies. “The monarch butterfly migration has been a huge point of conversation. Most of our students have heritage in Mexico, so for them to know about the four to five generations it takes for a butterfly to migrate to Mexico back - it really connects with them,” Castillo said.

Throughout the day-long festival, students, teachers, families, and members of the Oxnard community celebrated El Dia de los Muertos and the monarch butterfly through a school-wide parade, music, arts and craft activities about monarch biology, native pollinators and plants, and educational stations about the monarch butterfly life cycle and migration. Children also created an ancestor’s tree by writing the names of loved ones lost on the wings of paper butterflies. 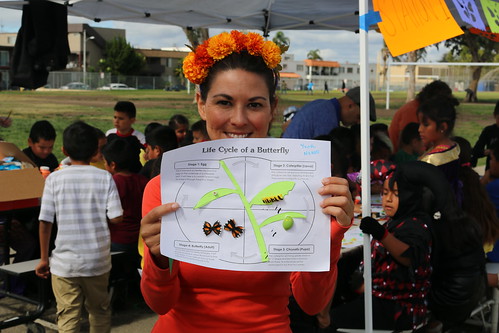 Service fish and wildlife biologist Lara Drizd worked with teachers to develop the festival’s activity stations. “It’s incredible to be able to connect with that many students at once,” Drizd said of the 1,100 plus students who participated. “Monarchs are a gateway to experiencing the outdoors. Between serving as ambassadors for the Schoolyard Habitat program and the monarch festival, these students are building the foundation for a lifelong enthusiasm for the outdoors.”

Planting a Future for Monarchs
In the spring of 2015, Curren School teachers and students worked with U.S. Fish and Wildlife Service biologists to design and develop a native pollinator garden funded by the Schoolyard Habitat Program to replace a grass lawn on the school’s property. The garden is filled with drought-tolerant plants, which require less watering than the grass lawn, and also serve as an outdoor classroom to learn about the monarch butterfly life cycle and other pollinators.

“We all worked hard on these plants,” said fourth-grader Nicholas Escamilla, as he peered at a chrysalis hanging from the stem of a native milkweed plant in his school’s native pollinator garden. “Monarchs have a really cool life cycle and they have beautiful wings.”

This fall, after an overnight soaking from much-needed rainfall on the eve of El Dia de los Muertos, the garden flourishes. Nicholas and a few of his fourth and fifth grade peers delicately pointed out several caterpillars and a chrysalis as they proudly showed off their garden and its inhabitants to festival visitors. 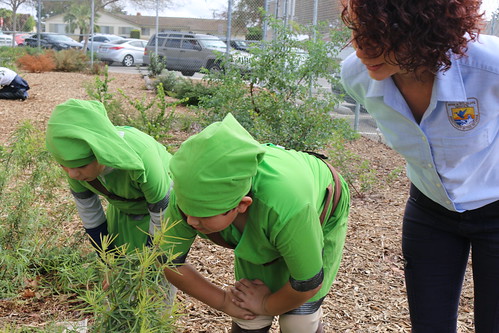 Bernice Curren students examine one of their narrow-leaved milkweed plants in their Schoolyard Habitat. Photo by Ashley Spratt, USFWS

Service biologist Michael Glenn said the native pollinator garden coupled with the fact that many students have family connections to parts of Mexico where the monarch butterflies overwinter, served as the inspiration to host the El Dia de los Muertos Monarch Butterfly Festival at Curren School.

“Over the year as we were working on planting the native Schoolyard Habitat and learning about monarchs, the students shared with me stories of El Dia de los Muertos told by their grandmother or grandfather, or their mom and dad. They were beautiful stories,” Glenn said. “In talking with the kids and their teachers, we decided as a group to hold an El Dia de los Muertos event at the school to educate students, their families, and the community, about the threats facing the species, and how people can help support monarch butterflies by planting native milkweed and nectar plants in our own backyards.”

Principal Castillo looks forward to continuing the El Dia de los Muertos Monarch Butterfly Festival tradition in coming years, and hopes to continue to spark dialogue about the cultural and social aspects of environmental studies with students who come through the hallways of Curren School. “The students are committed to ensuring that they are doing their part to help the monarch butterfly and the environment it depends on for survival.”

Photos and videos from event: https://flic.kr/s/aHskMrY74G