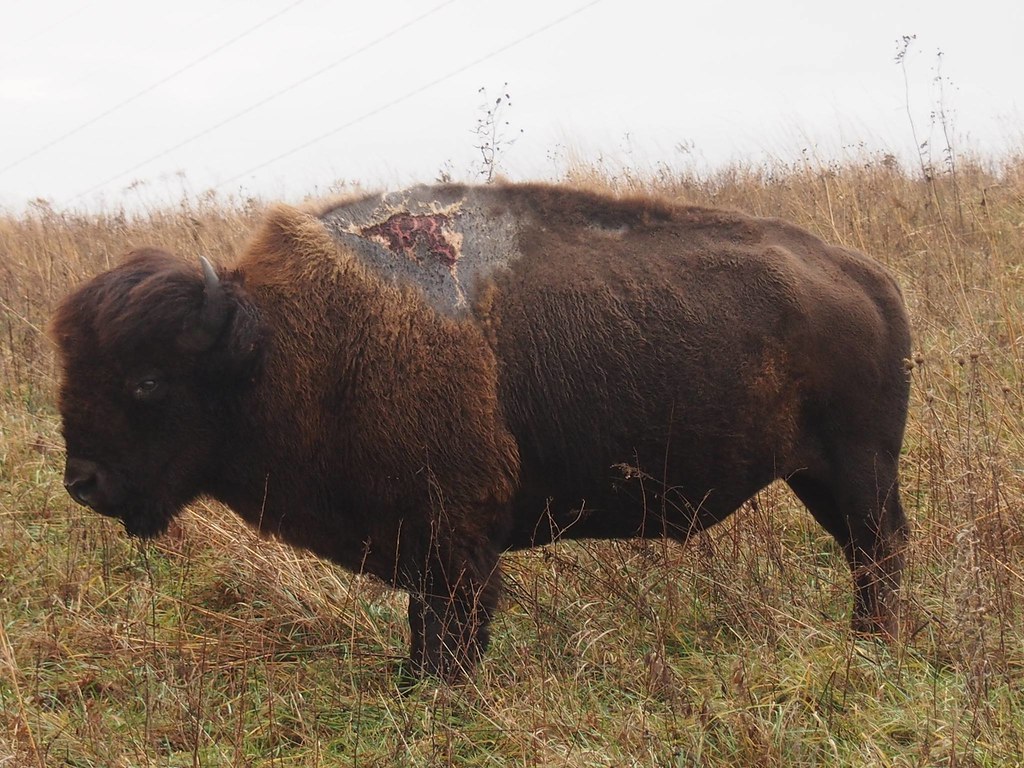 Can you imagine being struck by lightning? Sparky, a bison at Neal Smith National Wildlife Refuge in Iowa knows exactly what it’s like! Sparky was struck in 2013, and is doing surprisingly well. We recently checked in with Wildlife Biologist Karen Viste-Sparkman to learn more about Sparky’s amazing story.

Sparky joined the herd at Neal Smith in 2006 after being transferred from the National Bison Range in Montana. As you may have guessed, Sparky earned his name after the lightning strike and is the only bison that has been struck at the refuge - although it does occasionally happen across the country.

Karen does regular checks on the bison to watch for signs of illness and check body condition. During a survey in late July 2013, she noticed a bull standing by himself. When she took a closer look through her binoculars, she noticed that Sparky looked bloody. This wasn't entirely surprising because bison bulls will often fight during the mating season and July tends to be a prime time for injuries. Upon closer inspection, it was clear that Sparky had been burned over a large area. His hump was missing hair and there was a large lump on his hind leg, which must have been the exit wound, meaning Sparky was lying down at the time of the strike.

Sparky was thin after the strike and wasn't expected to live long. Since a lightning strike is something that could easily occur in wild bison anywhere, the refuge let nature take its course. There are no natural predators in the bison area, so injured bison are monitored regularly and euthanized if they're unable to eat or walk. Sparky was standing when his injuries were discovered, which was a promising sign. Karen kept checking on Sparky and was able to watch his wounds slowly heal. With a limp, Sparky kept walking.

At 11 years old and about 1,600 pounds, Sparky is a bit thinner than the rest of the bison, but he still stands strong. Before being struck, Sparky fathered three calves. Genetic testing will tell us if he successfully reproduced after the strike, but we're hoping that he does because he's one tough bison!

If you ever find yourself near Des Moines, stop by Neal Smith National Wildlife Refuge and see if you can spot Sparky. He tends to spend his time just like other bulls - hanging out in small groups or enjoying some quiet time alone.

Comments (39)  |
It's not quite time, it's quiet time.
# Posted By Turkey Dog | 1/5/16 11:14 PM
wow! what a story!
# Posted By Pauline St.Denis | 1/8/16 11:45 AM
What an interesting story! Good for you Sparky!!! Thanks for sharing the story. I grew up in Montana, and honestly never thought about the Bison getting struck by lightning. Thanks for sharing
# Posted By Tlynn | 1/8/16 12:01 PM
An amazing story of survival -- long live Sparky, Maybe we will come and see Sparky and friends.
# Posted By Gail | 1/8/16 12:06 PM
Wow! Very unfortunate, but glad he's surviving.
# Posted By Chris | 1/8/16 12:06 PM
That is one tough bison, way to go Sparky.
# Posted By Brian Kanouse | 1/8/16 12:22 PM
Thank you for such a gratifying story! It is good to hear about recovery and not stories about grisly maiming on federal lands. I love how FWS takes pride in caring for all the creatures as well as the land.
# Posted By Aimee Q | 1/8/16 12:50 PM
Can you show us what Sparky looks like now? Thanks!
# Posted By Suzanne | 1/8/16 12:55 PM
Awesome story about Sparky, the Bison! I just kept reading it. Inspirational to me, maybe other??? Shows that bad things happen even to the innocent beasts in nature. I'm touched that even though, he stood alone from his herd, he still survived and it takes time to heal wounds. This applies to people too. Nature often has quiet, yet significant and enduring examples, to remind us that we can take encouragement, insight from many situations outside ourselves. Sparky's picture shows his wounds on his body but it also shows that he is still standing, thriving and living. I hope Sparky has a great 2016 New Year in the Bison World! Thanks for sharing this story narrative and for taking care of America's precious resource, our natural habitats. SPC
# Posted By | 1/8/16 1:29 PM
det må jeg give den. Det er sgu flot klaret!
# Posted By Villads Claes | 1/8/16 1:33 PM
Thank you for this heartwarming story! I hope Sparky's health continues to improve.
# Posted By | 1/8/16 1:44 PM
We love you, Sparky. Keep going!
# Posted By Ramona | 1/8/16 1:52 PM
Great comment and well written. I was inspired with the story and also the comment. He takes care of His own!!!
# Posted By 222250robert | 1/8/16 2:04 PM
Thank You for this Story Good News is...
.Happy News :)
# Posted By Robyn Renee | 1/8/16 2:35 PM
Hooray for Sparky and all the Bison. And Hooray for the Fish and Wildlife Service!! You folks do a great Job!!
Sparky is a Hot Mess!!
# Posted By Cliff and Pearl Bove | 1/8/16 2:38 PM
The story of Sparky is very inspiring! Thanks to all whom care for this beautiful animals landscape!;
# Posted By Joe Bartletti | 1/8/16 4:57 PM
Sparky....you go fella!! My nickname is Sparky too! I was struck by lightening many years ago! The name came from my co-workers as I was struck in the parking lot where I worked. One co-worker friend sent me Sparky's story. I feel a special bond with Sparky! Many more happy years to Sparky!
# Posted By Vera | 1/8/16 10:48 PM
To add to Turjey Dog's spelling fetish, here's a grammatical tip. Sparky was LYING down, not LAYING.
# Posted By TonyC | 1/9/16 12:02 AM
Great story of a great bison. But he wasn't laying down (what -- pipe? a blanket?). He was lying down.
# Posted By Peter | 1/9/16 5:55 AM
Will someone put some lotion on that poor guy!! Lordy that looks painful!!
# Posted By | 1/9/16 2:16 PM
This is a story that evokes compassion and admiration. What a magnificent animal, a majestic creature. Go, Sparky--you're a little bit of heaven right here on earth!
# Posted By Donna Spencer | 1/9/16 4:01 PM
are there any recent photographs of Sparky?
# Posted By Bobbi Hernandez | 1/9/16 5:04 PM
I am appalled that, when a strong animal is struck by lightening, your philosophy is to watch. There are lots of places wildlife receives veterinary care. This situation screams for some humane action.
# Posted By viochita | 1/9/16 10:39 PM
As Native American, we do appreciate your full support to preserve and promote the bison. Our culture like the deer, bison are sacred animals and use in various ceremonies. Thank you to protect and support his healing.
# Posted By | 1/10/16 10:11 PM
Sure, Sparky is a tough bison. However, I question the wisdom in the 21st century to deny veterinary care and pain relief just to watch this animal and see if he heals. Compassion toward animals is the only way humans will survive on this planet. We cannot do it without the complex web of wildlife functioning at full capacity. Watching an animal suffer simply because he is "wild" is no longer acceptable. This animal lives within a heavily human-controlled environment and humans have responsibilities to such animals.
# Posted By Viochita Fea | 1/10/16 11:13 PM
<happy bison noise>
<happy bison noise, again>
<curious bison noise>
<indignant bison noise!!!>
<proud bison noise>

(Also, that scar looks a bit odd - is that a Lichtenberg figure?!)
# Posted By Danny in Canada | 1/12/16 8:49 AM
Really cool story, that animal must tough as nails. I follow a number of gov't blogs and you all at FWS always have some of the most interesting posts. Can't wait to read the next!
# Posted By Ken | 1/12/16 12:18 PM
Stay strong, Sparky!
# Posted By Rebecca | 1/12/16 2:07 PM
Did you name him Sparky before or after he was struck by lighting? Just curious!
# Posted By John | 1/13/16 11:26 AM
Sparky earned his name after the lightning strike and is the only bison that has been struck at the refuge - although it does occasionally happen across the country.
# Posted By Fish and Wildlife Service | 1/14/16 8:00 AM
Good for you Sparky. Now we need to make the bison the US animal symbol - they're naturally adapted to the environment and the environment would have been better if we'd stayed with bison instead of herding cows.
# Posted By growltigerkat | 1/14/16 2:07 PM
It's encouraging to see the efforts of individual USFWS employees on behalf of wildlife recovery and restoration. Hopefully there will be more political support for such policies as young people awaken to the huge importance of maintaining populations of wildlife sufficiently large for genetic diversity, and how thriving wild fauna and flora support human well-being in countless ways.
# Posted By Donald Lipmanson | 1/14/16 2:40 PM
He's been through such a tough ordeal. I'm glad he seems to be ok now. Good luck to you big guy!
# Posted By Krissa | 1/14/16 4:31 PM
Mr. Sparky seems ta be pretta nice! Long live Mista Sparky!! LONG LIVE MISTA SPARKY SPARK!!! Ok well have a nice day toodle-loo Mr.Sparky!!!
# Posted By Boo Boo Doo Doo Boo Boo Woo Woo | 1/14/16 4:44 PM
Awesome story thanks to sharing!
# Posted By Florence Baribeau | 1/14/16 7:02 PM
How terribly sad that Sparky was left on his own to recover or fail. Surely humans could have helped him with some first aid and soothing medication? How painful that serious burn must have been! I find this story very disturbing.
# Posted By Cathy | 1/14/16 7:55 PM
Leaving a wild animal to heal on its own may seem cruel to us, but then a lot of what nature does on its own time falls into that category. Interference rarely ends well; a good example comes from the book Cry of the Kalahari. The researchers broke a basic rule--non-interference--to set a lion's broken femur and ear-tag him in the process. A hunting safari in the area stopped by after he'd healed and heard all of the story...and the next day they shot that lion knowing from the ear tag who he was to the researchers. We humans do love our "charismatic mega-fauna", but that does NOT make intervention the best plan. I'm glad he made it on his own!
# Posted By NMH | 4/29/16 8:42 AM
Thanks for the great Sparky story! Always love the good story with a happy ending.
# Posted By Deb | 5/15/16 3:43 PM
Simply amazing !! Long live "Sparky" ! ??
# Posted By Ted M | 5/17/17 7:34 AM
Untitled Document