Fight the Winter Chills to Experience Thrills on Public Lands

Don’t let the cold weather keep you indoors. Bundle up, and enjoy all there is to see and do at national wildlife refuges and national fish hatcheries in the winter.

The White Mountain Apache tribe began taking steps to protect the Apache trout in the 1940s, including closing stream access to anglers in 1955. White settlers who fished for the trout had decimated its population; streams were subsequently stocked with non-native trout, which further displaced the native fish. Logging, agriculture and mining also exacted a toll on the native trout. By the late 1960s, its range had been reduced from some 600 miles of mountain streams in southeastern Arizona to less than 40. The Apache trout, among the first fish listed as endangered, received strong protections with passage of the Endangered Species Act (ESA) in 1973.

The tribe’s early efforts, and its subsequent and continuous cooperative work with the federal government, helped reverse the decline of Apache trout, whose status was upgraded to “threatened” in 1975. Today, the prognosis is good, thanks to the protections of the ESA and the collaborative conservation work in place.

“The Apache trout is a great example of how collaborative conservation can truly be effective at, not only preventing extinction, but promoting the recovery of a species,” says Matt Grabau, a science coordinator with the Service. “And it’s an example that deserves to be showcased.”

Now, thanks to Grabau and his peers, the efforts on behalf of this fish—the on-the-ground recovery work made possible by partnerships—are, in fact, showcased in an online library of case studies created to help foster and promote successful examples of collaborative conservation.

The Atlantic Intracoastal Waterway (ICW) is a 156-mile stretch of water that traverses down Florida’s eastern coast. The waterway is a popular avenue for boats and a great place to see manatees, the “belle” of the Florida marshlands. Tasked with protecting the manatee in these waters are Service Conservation Law Enforcement Officers (CLEOs) such as Jason Lowe. Lowe has been patrolling the ICW for more than five years, and this past June he found himself not rescuing a manatee but two people on a sinking boat. (Photo: Slow speeds in a Manatee Protection Zone are meant to protect the manatees from boat strikes. Photo by Jim Valade/USFWS)

On June 20, an estimated 2,000 boats were taking part in a boat parade on the ICW near Cocoa, Florida. Lowe and Florida Fish and Wildlife Conservation Commission (FWC) Officer Nick Stelzer were watching the crowd from Lowe’s patrol boat.

“Due to the volume of traffic, government officials wanted lots of law enforcement in the area because it’s a Manatee Zone,” Lowe says. “We were just watching everyone making sure speed limits were observed.” 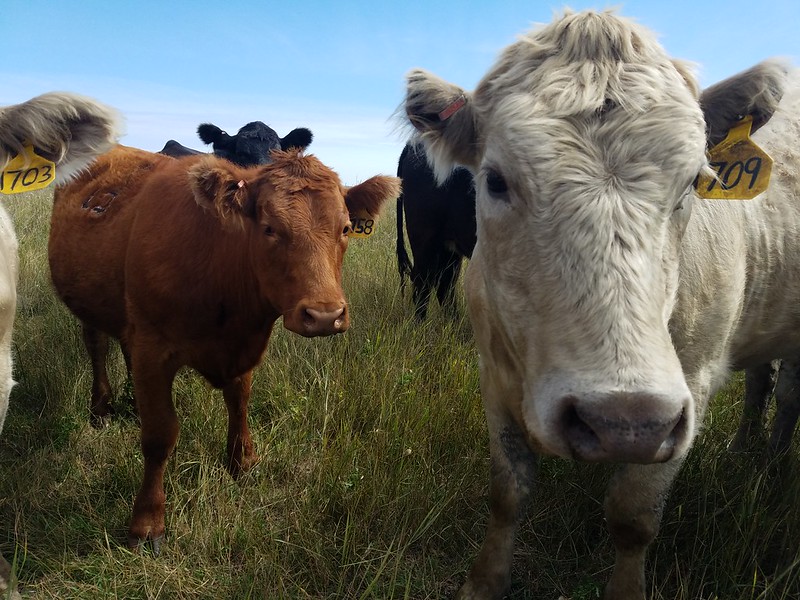 -To move cattle to the most environmentally friendly pastures, cattle ranchers have decades of observations on plant growth, water availability and the prevalence of invasive species across their grazing areas. Photo by Krista Lundgren/USFWS

As the year comes to a close, I am reflecting on partnerships the U.S. Fish and Wildlife Service has built and strengthened. Recently, the Service was added as a party to a Memorandum of Understanding (MOU) signed by Ducks Unlimited, the National Cattlemen’s Beef Association (NCBA), Public Lands Council (PLC) and Safari Club International (SCI). The agreement codifies the shared and mutually beneficial natural resource management goals of these diverse organizations.

How to Catch Lots of Ducks

In 1948, refuge manager Herb Dill and maintenance worker Howard Thornsberry invented the first cannon-projected net trap to catch numerous waterfowl for banding purposes on Swan Lake National Wildlife Refuge in Missouri. On their first attempt, they caught 20 geese with their cannon that cost less than $70 to build. They said that it took several experimental runs with doses of explosives of potassium chlorate and sugar to get the charge right. Initially they suffered lots of big explosions or fizzles! This innovative tool is still widely used today, and it’s invention was another example of clever field employees inventing something others said could not be done. We have several old cannons and nets here in the museum. The nets come to us in a very dirty state, and it is always fun to watch the volunteers try to vacuum away the bird feathers and poop.

Predators such as bobcats also use guzzlers, as water troughs are sometimes called, as a reliable water source in the dry desert. Photo by USFWS

Wildlife managers have long used water, especially in the arid Southwest, as a tool to help support healthy animal populations. What began as a handful of managed water sites for quail and mule deer around 1940 blossomed into some 6,000 sites intended to increase populations and benefit overall health for dozens of mostly game species in 10 western states by the close of the 20th century. Provisional water – contained in troughs, large tires, basins, open tanks and dammed up pools ­­– is now used to support a vast range of wildlife management and species conservation work, from increasing mule deer and other game populations to recovery efforts for endangered Sonoran pronghorn and desert bighorn sheep.

A new study, however, reveals that in some cases, use of the common wildlife management tool can be fine-tuned to optimize benefits for targeted species by reducing risk from predators that are likewise drawn to the same water sources. Published in PLOS One, the Public Library of Science’s peer-reviewed open-access scientific journal, the research represents significant implications for other like-minded wildlife management efforts.

Cleaning Up the Pacific

In 2005, a research vessel ran aground off Pearl and Hermes Atoll, part of the Hawaiian Islands National Wildlife Refuge, approximately 1,200 miles west of Honolulu, spilling thousands of gallons of fuel and oil. A nearly $4 million settlement has resulted in the removal of  138 metric tons of marine debris from the Papahanaumokuakea Marine National Monument, which the atoll is part of, since 2011.

I was inspecting boxes being exported from the International Mail Facility in Chicago, Illinois, with my partner, Wildlife Inspection Canine Lancer, a 6-year-old yellow Labrador retriever. We had done this search many times over the last few years, but this time was different. From the moment we entered the inspection area, Lancer had his nose in the air sniffing intently. I could tell he was following a scent. We zig-zagged through the bins, and Lancer stopped and alerted to a box being shipped to Asia. Cautiously, I opened the box and found 15 live turtles. (At left: Lancer with three boxes he found containing turtles. Photo by USFWS) The animals were stuffed into socks and tightly wrapped in tape so they couldn’t move. There was nothing on the outside of the box that would have tipped off a wildlife inspector to its contents. It had been falsely labeled to contain makeup and cosmetics, but Canine Lancer knew immediately that hidden wildlife was inside.

Over the next six months, Lancer found 23 boxes containing a total of 263 turtles being smuggled out of the United States. Across the country, other Service wildlife canine inspection teams had also found large quantities of turtles being smuggled. The boxes came from different U.S. shippers and were always labeled to contain innocuous items like clothing or toys. Service special agents initiated investigations and discovered there were many co-conspirators. In this case, the co-conspirators were illegally taking turtles from the wild in the United States, trafficking them across state lines and smuggling them to Asia.

As Usual, Wisdom the Albatross Returns to Midway Atoll 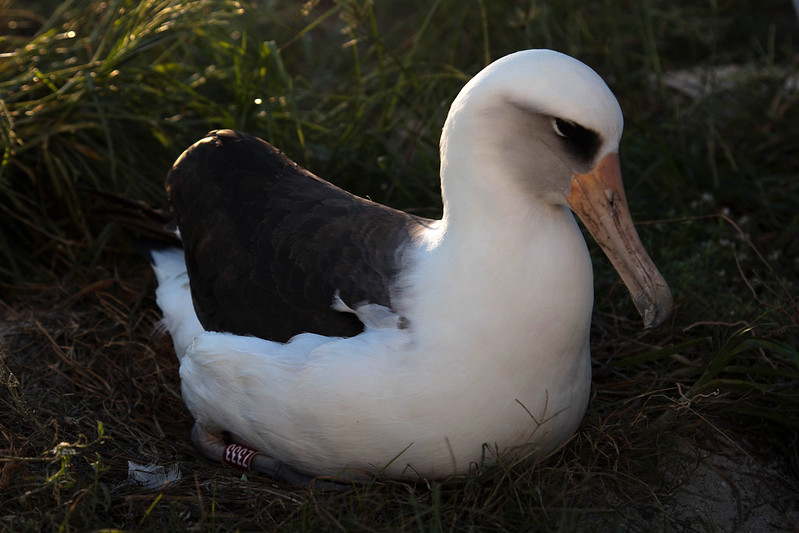 Wisdom, the world’s oldest known and banded wild bird, has returned to Midway Atoll National Wildlife Refuge and Battle of Midway National Memorial. At least 69 years old, Wisdom, a moli or Laysan albatross, was first seen at her nest this year at the end of last month. Biologists have confirmed that she has laid an egg.

A Reason for Hope

Splash-backed poison frogs at the time of seizure. Photos by Alberto J. Gonzalez/USFWS

In September, U.S. Fish and Wildlife Service wildlife inspectors carefully placed a container of 21 splash-backed poison frogs, including 19 of a rare blue-morph coloration, on a plane home to Brazil. The country doesn’t allow the frogs to be exported, but they are prized by collectors. U.S. wildlife inspectors seized the frogs as part of the fight against wildlife trafficking. In Brazil, the frogs will have a permanent home at the São Paulo Zoo, one of Brazil’s premier institutions.

Open Spaces is a blog about news, issues, and people in the U.S. Fish and Wildlife Service.