With its iconic orange and black markings, the monarch butterfly is one of the most recognizable species in North America. Monarchs are particularly remarkable because they migrate each year, flying from as far as Canada and across the United States to congregate at a few forested overwintering sites in the mountains of central Mexico and coastal California. These sites are an amazing phenomenon: thousands of monarchs cluster in the trees in California, and millions of monarchs drape large swathes of forest in Mexico.

But over the past two decades, monarch numbers in North America have declined, prompting the U.S. Fish and Wildlife Service to join state agencies, tribes, other federal agencies and non-government groups to identify threats to the monarch and take steps to conserve monarchs throughout their range. 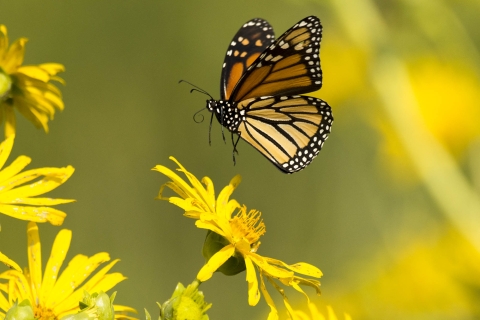 Why are we concerned about monarchs?

For more than 20 years, communities and scientists have been tracking monarch populations, with growing concern as the number of monarchs at overwintering sites has declined. What does this trend mean for the future of the monarch? Is it a genuine decline in the monarch population? If so, is it part of a larger natural cycle, a temporary circumstance, or a result of human impact? Is the monarch at risk of extinction, or might it be in the future?

What threats does the monarch face?

The primary drivers affecting the health of the two North American migratory populations are changes in breeding, migratory, and overwintering habitat (due to conversion of grasslands to agriculture, urban development, widespread use of herbicides, logging/thinning at overwintering sites in Mexico, unsuitable management of overwintering groves in California, and drought), continued exposure to insecticides, and effects of climate change climate change
Climate change includes both global warming driven by human-induced emissions of greenhouse gases and the resulting large-scale shifts in weather patterns. Though there have been previous periods of climatic change, since the mid-20th century humans have had an unprecedented impact on Earth's climate system and caused change on a global scale.

Status of the monarch butterfly under the Endangered Species Act

The Monarch Species Status Assessment identifies the monarch’s needs (at an individual, population and species level), and assembles information on the current status, threats or stressors, along with conservation efforts that may influence threats. The assessment also projects future status of the species based on analysis of this information. Read about the population model that helps us predict population levels for both the eastern and western North American monarch populations.

In December 2020, after an extensive status assessment of the monarch butterfly, we determined that listing the monarch under the Endangered Species Act is warranted but precluded at this time by higher priority listing actions. With this finding, the monarch butterfly becomes a candidate for listing; we will review its status each year until we are able to begin developing a proposal to list the monarch.

Is the monarch federally protected now?

No. Our 12-month finding does not protect monarchs under the ESA at this time. We first must propose the monarch for listing as either an endangered or threatened species, gather and analyze public comments and any new information, and using the best available science, make a final decision and publish a final rule. That process is deferred while we work on higher-priority listing actions.

Our Information for Planning and Consultation (IPaC) project planning tool identifies the monarch as a candidate species, and project developers, particularly federal agencies, may choose to voluntarily add conservation actions to conserve monarchs to their projects.

What responsibilities do federal agencies have under section 7 of the ESA for the monarch as a candidate species?

Neither section 7 of the Endangered Species Act nor the implementing regulations for section 7 contain requirements for federal agencies with respect to candidate species. When working with other agencies, U.S. Fish and Wildlife Services Ecological Services field offices will recommend ways to reduce adverse effects and/or request studies as appropriate. These may be added as conservation recommendations. We are eager to work with other federal agencies to conserve candidate species.

We continue our active efforts to conserve monarch butterflies, working with partners across the monarch’s range. The Nationwide Candidate Conservation Agreement on Energy and Transportation Lands for monarchs was approved in April 2020.

More than 45 energy and transmission companies and state departments of transportation are voluntarily committing time and funding to carry out monarch butterfly-friendly management practices on millions of acres in rights of way. In turn, their actions may preclude the need to list the monarch or could speed recovery if the monarch is listed under the Endangered Species Act. The monarch butterfly Candidate Conservation Agreement with Assurance with integrated Candidate Conservation Agreement for energy and transportation lands additionally provides participants regulatory assurances that additional conservation measures will not be required if the monarch is protected under the ESA. The U.S. Fish and Wildlife Service has approved an “enhancement of survival” permit application associated with this agreement. The permit holder is the University of Illinois-Chicago, which is coordinating participation. Read about the historic agreement that will conserve millions of acres for monarch butterflies and other pollinators across the United States

FAQ: Candidate Conservation Agreement with Assurances for the Monarch Butterfly