The elevator ride for about two dozen late-fall Chinook salmon ends with a whoosh of water as the fish, all between 15 and 25 pounds, are lifted into a waiting Coleman National Fish Hatchery tanker truck.

The weekly exercise takes place at Keswick Dam, about two miles northwest of Redding on the Sacramento River. This collection of winter-run adults for a crucial broodstock program is just one of several ways the U.S. Fish and Wildlife Service’s hatchery complex is assisting virtually every run of one of California’s most prized resources – Chinook salmon.

“It’s safe to say there would be a lot less salmon out there than there is now without our efforts,” said John Rueth, assistant hatchery manager at the Livingston Stone Hatchery, which is one of two Service hatcheries within the Coleman National Fish Hatchery Complex.

William Hopkins takes a Chinook salmon out of a tanker truck and tags it. USFWS Photo/Steve Martarano

The Tuesday elevator-ride, running from December to July, begins at the base of the dam. A fish ladder prods the fish – which can include some endangered winter-run – into a holding pool where up to 40 are collected at a time before each week’s move up the road. Trucks headed to Livingston Stone wait on the dam above the fish trap, and when the fish arrive at the hatchery, staff members tag each one and take genetic samples before returning them to Coleman, where they spawn and await release into the wild next winter.

In addition to the late fall-run fish releases with this program, totaling about a million fish, the numbers of other runs of salmon coming from Coleman are impressive. As many as 12 million fall-run Chinook salmon smolts are released in the spring beginning in late March, in addition to the 420,000 winter-run Chinooks (about 400 of them were acoustic tagged beforehand at the hatchery)  taken from Livingston Stone and released at a Redding’s park boat ramp.

And all this work has been complicated by drought the past two years. Due to low water at the Coleman area release point at Battle Creek, a portion or all of the 12 million fall-run Chinook salmon smolts had to be trucked in 2014 and 2015 directly to the Bay Area for ocean release. This massive 22-day operation, spread out over several months, also involved California Department Fish and Wildlife facilities, employees, and equipment and is logistically challenging. With more rainfall so far this year, the Service is hopeful that the smolts can be released on site.

Rueth also pointed out that in 2015, the collaborative winter-run captive broodstock program, first started in1998 but halted in 2006, is reinitiated. The program joins state and federal agencies together to raise fish at Livingston Stone for above-rim passage studies and possible reintroduction into Battle Creek. The 2014 Water Action Plan called for establishing fish passage around “rim” dams that block historic salmon and steelhead habitat.

With this program, we can provide winter-run salmon without having to remove them from the wild,” Rueth said, who added those fish are being reared right now and the total number for the program hasn’t been determined.

In addition to work at Coleman, other Service efforts to help save endangered salmon are receiving recognition. The Red Bluff Fish and Wildlife Office’s daily rotary screw trap survey on the upper Sacramento River, for example, provides critical information on how well the state’s crucial anadromous, i.e. salmon, fishery is doing.

The National Oceanic and Atmospheric Administration recently used that data for widely distributed information (see related infographic) that generated news because it showed that that just 318,000 winter-run juveniles survived to pass through Red Bluff (3 percent survival rate) compared to 849,000 in 2014 (41 percent).

Steve Martarano is the public affairs officer for the Bay Delta and Lodi Fish and Wildlife Offices.

At Livingston Stone NFH, scientists acoustic tagged about 250 Chinook winter-run salmon each of the two days the 420,000 salmon were released in Redding. USFWS Photo/Steve Martarano

The fish were taken from Livingston Stone NFH to the South Bonneyview Boat Ramp in Redding. USFWS Photo/Steve Martarano

Livingston Stone Hatchery, operated by the U.S. Fish and Wildlife Service, is located at the base of Shasta Dam. USFWS Photo/Steve Martarano 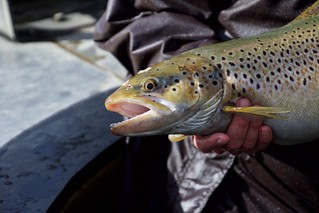 There's more: Check out our other hatchery operations and salmon slideshows here.

NPR: Drought is taking a toll on one of California's most precious native fish. The winter-run Chinook salmon. The past two years have seen a decline in the numbers of juvenile salmon migrating downstream from Northern California, where they have spawning grounds.

Listen to the National Public Radio interview with Jim Smith, project leader of the Red Bluff Fish and Wildlife Office, as he takes an NPR reporter to the upper Sacramento River.